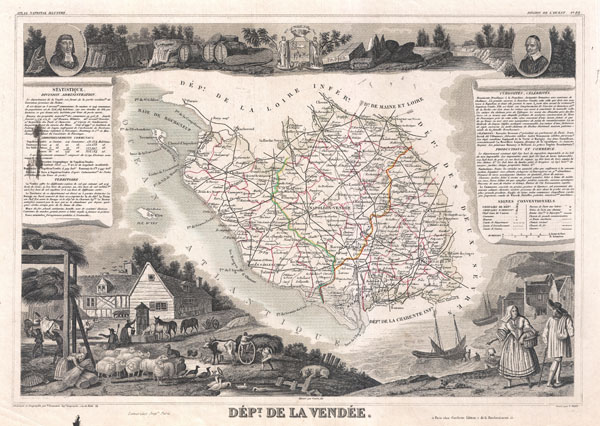 This is a fascinating 1852 map of the French department of Vendee, France. Vendee is home to a number of small vineyards around the communes of Vix, Brem, Pissotte and Mareuil-sur-Lay. These wines are marketed under the 'Fiefs VendĂ©ens' designation. Production quality has improved markedly over recent years, and, having already achieved the classification Vin DĂ©limitĂ© de QualitĂ© SupĂ©rieure (VDQS), the wines are on their way towards A.O.C status (Appellation d'Origine ContrĂ´lĂ©e). The map proper is surrounded by elaborate decorative engravings designed to illustrate both the natural beauty and trade richness of the land. There is a short textual history of the regions depicted on both the left and right sides of the map. Published by V. Levasseur in the 1852 edition of his Atlas National de la France Illustree.

Victor Levasseur (1800 - 1870), an important French engineer, cartographer, and engraver of the mid 19th century, held a number of important cartographically related political and educations posts in France. He is most famous for his Atlas National IllustrĂ© des 86 DĂ©partements et des Possessions de La France, a large decorative atlas of France, including his Planisphere and five important continental maps. Levasseur's maps are distinctive for their wide decorative margins containing elaborate depictions of the scenery, peoples, and trade goods of the areas he mapped. Levasseur maps are also known to offer a wealth of statistical data. Until recently, very few Levasseur Atlases migrated out of France where they were mostly used in public libraries and town halls. His work represents some of the last great decorative atlases of the 19th century. Learn More...