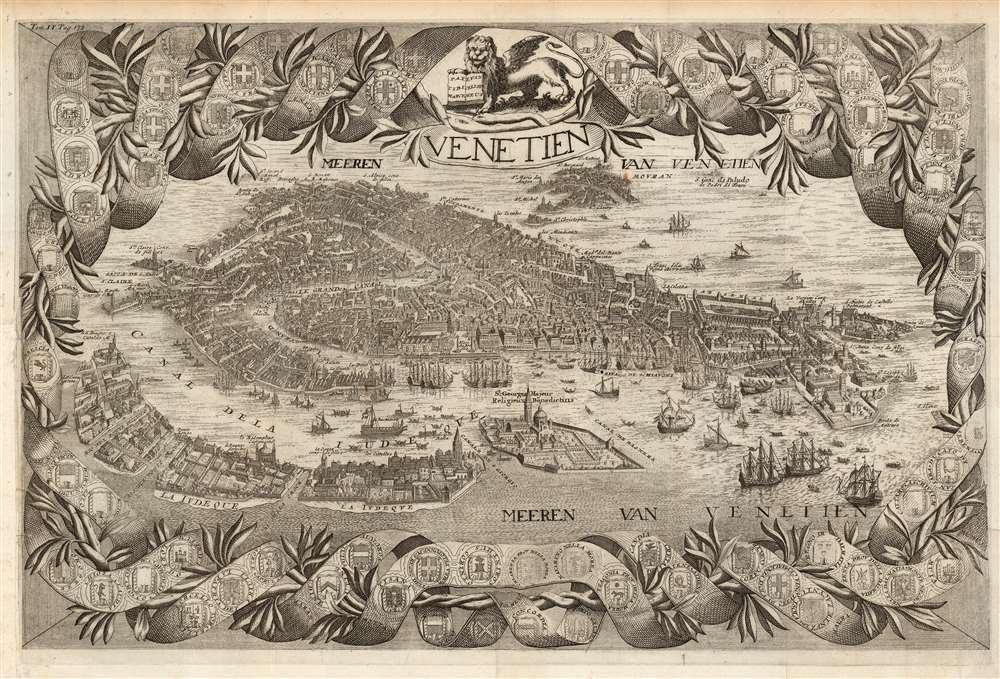 This beautiful, rare engraving is an unrecorded variant of Vincenzo Coronelli's bird's-eye view of Venice. While the work is unsigned, it has been attributed to the Dutch engraver Jan Lamsvelt (or Lansvelt.) The city's unmistakable, archipelagic layout is portrayed in meticulous detail, and the waters around the city are teeming with ships and galleys (including the state barge of the Doge of Venice, Il Bucintoro). The engraving is a reduced (approximately 2/3) version of Vincenzo Coronelli's 1693 Citta di Venezia, which combined Matthias Merian's meticulous bird's-eye view with a superbly-composed ribbon-and-laurel border, embellished with the coats of arms of the various dominions of the Venetian Republic. In addition to the change of scale, the engraver has translated the bulk of the text in the body of the map from the original Italian to French, to conform to the language of the 1699 Voyages du Mr. Du Mont printed in the Hague, for which this engraving was intended. At some point that year, the plate was amended, changing the title and the two instances of the name for the Venetian Lagoon from French to Dutch. This rather hasty alteration was made for the inclusion of the plate in the Dutch edition of Du Mont's Voyages printed in Utrecht, also in 1699. None of the rest of the French text has been changed, and the plate numbering engraved in the upper left corner is unchanged between the two states of the view. That the plate was first engraved in the French, followed with the minor alteration to create a Dutch version, seems self-evident.

A Glimpse of the Engraver's Editing Process

Coronelli's Venice contained, in the upper left and right within the border, two medallions: one containing the view's title, and the other containing its dedication and date. Close inspection of the present engraving will reveal a ghost image of both these medallions. The engraver had initially included them in the composition of this plate, but then changed his mind, burnishing out the circular borders and replacing them with the gentle hachuring characterizing the water areas on the rest of the view. The lack of any trace of text within the medallions suggests that the reduced scale of the composition made the medallions too small for legibility. The engraver, too, has chosen to replace four coats of arms appearing beneath the Venetian lion on Coronelli's view with a title banner, making a smaller title medallion irrelevant.

We are not aware of any further volumes in which either the French or Dutch state of this view appear. It may well be that after the publication of the Utrecht edition of Du Mont's Voyages the plate was melted down or burnished for the engraving of a different work.

This plate was engraved first for inclusion in the French-text edition of the 1699 Voyages du Mr. Du Mont printed in the Hague by Chez Etienne Foulque and François l'Honoré. The present, second state of the view appeared that same year in the Dutch edition of the same work printed in Utrecht by Anthony Schouten. OCLC catalogs 21 examples of the Dutch edition of the book, compared to about 65 of the French. No separate examples of the view are cataloged in institutional collections.

Lamsvelt (Lansvelt), Jan (September 30, 1674, June 26, 1743) was a Dutch engraver and bookseller active in Amsterdam and Utrecht. Most of his work was as an illustrator, although he had several maps and views to his credit. As is often the case with engravers, little is known of his early years or education. Learn More...


Vincenzo Maria Coronelli (August 16, 1650 - December 9, 1718) was an important 17th century cartographer and globe maker based in Venice. Coronelli was born the fifth child of a Venetian tailor. Unlikely to inherit his father's business, he instead apprenticed in Ravenna to a woodcut artist. Around 1663, Coronelli joined the Franciscan Order and in 1671, entered the Venetian convent of Saint Maria Gloriosa dei Frari. Coronelli excelled in the fields of cosmography, mathematics, and geography. Although his works include the phenomenal Atlante Veneto and Corso Geografico, Coronelli is best known for his globes. In 1678 Coronelli was commissioned to make his first major globes by Ranuccio II Farnese, Duke of Parma. Each superbly engraved globe was five feet in diameter. Louis IV of France, having heard of the magnificent Parma globes, invited Coronelli to Paris where he constructed an even more impressive pair of gigantic globes measuring over 12 feet in diameter and weighing 2 tons each. Coronelli returned to Venice and continued to published globes, maps, and atlases which were admired all over Europe for their beauty, accuracy, and detail. He had a particular fascination for the Great Lakes region and his early maps of this area were unsurpassed in accuracy for nearly 100 years after their initial publication. He is also well known for his groundbreaking publication of the first accurate map depicting the sources of the Blue Nile. At the height of his career, Coronelli founded the world's first geographical society, the Accademia Cosmografica degli Argonauti and was awarded the official title Cosmographer of the Republic of Venice. In 1699, in recognition of his extraordinary accomplishment and scholarship, Coronelli was also appointed Father General of the Franciscan Order. The great cartographer and globe maker died in Venice at the age of 68. His extraordinary globes can be seen today at the Bibliothèque Nationale François Mitterrand in Paris, Biblioteca Marciana in Venice, in the National Library of Austria and in the Globe Museum in Vienna, in the library of Stift Melk, in the Special Collections Library of Texas Tech University, as well as lesser works in Trier, Prague, London, and Washington D.C. Coronelli's work is notable for its distinctive style, which is characterized by high quality white paper, dark intense impressions, detailed renderings of topographical features in profile, and numerous cartographic innovations. Learn More...