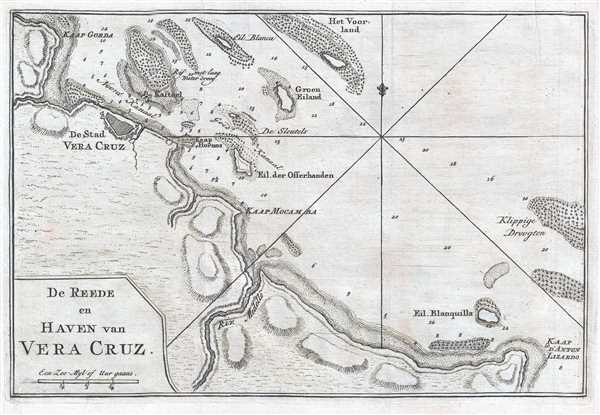 Veracruz and its surroundings at the height of its wealth.
$250.00

This is a 1765 Isaak Tirion map of Veracruz, Mexico. The map depicts Veracruz from the point just north of Veracruz along the coastline to Anton Lizardo. Numerous reefs, islands, and other hazards are illustrated off the Mexican coast, including the island known as San Juan de Ulúa, just off the coast from Veracruz. This was where Juan de Grijalva, the first Spanish explorer to arrive in the region, landed in 1518. The fortress labeled as Kasteel on the map was constructed on this island as well, in an effort to protect the city from pirates. As the premier port of export for gold and silver to Spain, Veracruz became a popular target for these sea-going rogues, thus the fort, and the subsequent construction of docks and a customs house to discourage smuggling. By the time this map was produced, Veracruz was the wealthiest and most important city in New Spain, even most prosperous than Mexico City.