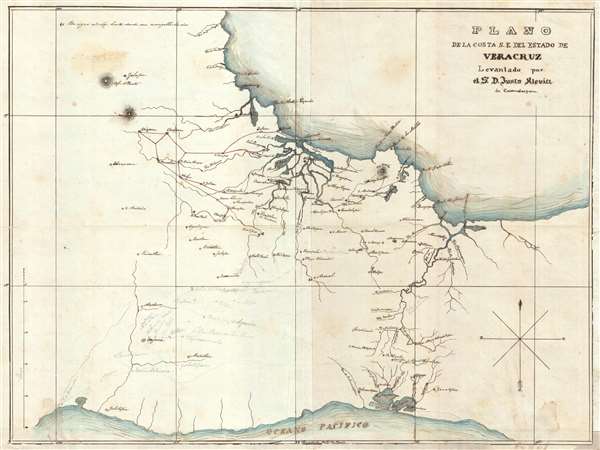 Cartographer's working copy of a definitive map of Veracruz State during the Mexican American War and the War of the Second French Intervention in Mexico.
$3,500.00

This is a rare, mysterious, and important c. 1848 - 1861 manuscript map of the Mexican provinces of Veracruz and Oaxaca, including the important Isthmus of Tehuantepec. The map, attributed to Dr. Justo Klevitz of Cosamaloápan, represents original cartography covering one of the most important theaters of the Mexican-American War (1846 – 1848) and the subsequent War of the Second French Intervention in Mexico (1861 - 1867). Coverage extends from the Gulf of Mexico to the Pacific, with extensive detail in the region to the south of Veracruz, and along the Papaloapan, Tesechoacán, San Juan and Cotzacoalcos Rivers. Interesting pencil annotations in the vicinity of Oaxaca, some of which bear question marks or are crossed out, suggest that the map's author was in the process of expanding the map when his work mysteriously ceased.

Influential Mapping of an Important Theater in the Mexican-American War

The map is attributed in the title to Dr. Justo Klevitz of Cosamaloápan. It is unclear who Klevitz was or why the map was made, but attributions in Mexican and French literature suggest Klevitz completed the map in 1848, which would have coincided with Mexican general Antonio López de Santa Anna need for a far more accurate map of this exceptionally important corridor. Klevitz was probably a local (Cosamaloápan is located on the Palaloapan River near the center of this map), potentially a German immigrant to Mexico with military training, who was recruited by López de Santa Anna's forces to compile an accurate map of this important yet little understood region.

Widely Cited as the Best Map of Veracruz

As the best cartography yet produced for the southern part of Veracruz state, Klevitz's map is recognized by several important authorities. References include the multiple editions of the Boletín de la Sociedad de Geografía y Estadística from about 1871, Manuel Orozco y Berra's 1871 Materiales para una cartografie Mexicana (#1125), and the Frenchman Gustave Léon Niox's 1874 Expédition du Mexique, 1861-1867. This last reference suggests that this map must have been available to the French, possibly from looted military archives in Mexico City, during the early years of the War of the Second French Intervention, c. 1861.

A Comparable Example at the Boston Public Library

Editions of the Boletín de la Sociedad de Geografía y Estadística note that the map was amended, as here, with a table of latitude and longitude, the latter on the Meridian of Paris, by A. G. Lleva. Who Lleva was and when this revision was completed is unclear. Nonetheless, a very similar untitled manuscript map, without the longitude and latitude lines, does appear in the collections of the Boston Public Library. Close study reveals that both maps were either copied from the same source or one from the other. Between the two maps, the present example is more comprehensive. Both examples exhibit similar cartography in the Papaloapan, Tesechoacán, and San Juan River Valleys, but in the Cotzacoalcos River region, the cartography here is far more sophisticated, suggesting it is the later, thus more advanced, of the two manuscript maps. That the BPL example is untitled also suggests that it cannot be the original referenced in Mexican and French documents, as all such refer to the title as presented on this example.

In the 1860s, a manuscript version of this map, perhaps this very example, was collected by Captain Gustave Leon Niox (1840 - 1921) of the French Corps Expéditionnaire to reference in compiling a comprehensive and cartographically superior map of Mexico for use during the War of the Second French Intervention in Mexico (1861 - 1867). When the Corps Expéditionnaire arrived in Veracruz in 1861, the best available maps of the region were Antonio Garcia y Cubas's Atlas, his Carta General de la Republica Mexicana, Henri Saussure's map of Mexico and the Gulf of Mexico, and an incomplete American map of the Mexico Valley. To stage a successful invasion, French military commanders realized they needed a better map. They complied documents, new military surveys, and Mexican sources, including this map, into a working army map known as Carte d'Ensemble des Directions suivies par les Colonnes Expeditionnaires. That map, the largest and most accurate map of Mexico then available, was published by the Depot de Guerre in Paris in 1873, well after the end of the war, as the Carte du Mexique. On that Depot de Guerre map, the cartography in the river systems and delta just south of Veracruz draws directly from the present manuscript.

Several clues suggest that both this map and the example at the Boston Public Library, were likely produced for the 1861 French invasion. First, the road indicated on both maps extending from the port city of Alvarado to Orizaba, corresponds to the route taken by the Corps Expéditionnaire on their way to Mexico City. It is noteworthy that the French invasion followed this southerly route as opposed to the easier more northerly route through Jalapa taken by most earlier American and Spanish invaders. That the Orizaba route is noted here, but not the Jalapa route, closely associates this manuscript map with the second French invasion.

Another Clue and the Black Christ of Otatitlán

Another clue linking this map to the French invasion appears in the text of the map. The city of Otatitlán is here identified as Otatitlán ou Santuario. The French word for 'or', 'ou' is used instead of the Spanish 'o', suggesting that this map was drawn by a Frenchman. Santuario refers to Otatitlán's role as the sanctuary for one of three mysterious, supposedly miraculous, Cristo Negro or 'Black Christ' figures located in Mexico and Guatemala. Although the town's name was never officially Santuario, pilgrims to the Cristo Negro typically referred to it as such.

Oaxaca – A Cartographer's Work in Progress

One of the most fascinating aspects of this map are the pencil annotations appearing in the vicinity of Oaxaca (Oajaca). Similar marks do not appear on the Boston Public Library example. Although slightly sloppier than the inked cartography, these pencil notes are identifiably in the same hand. Towns are identified with question marks, roads are crossed out, and there is some evidence of erasing. These annotations lead us to believe that this map was a cartographer's map – a work in progress that, for whatever reason, remained unfinished.

Our conclusions on this piece suggest that it is a French copy of a Spanish manuscript map looted from the archives of Mexico City by the Corps Expéditionnaire. The Oaxaca annotations indicate that this was a working cartographer's map, probably crafted by a French or French trained Mexican military engineer active under Captain Noix, who was responsible for assembling the Carte du Mexique. This may have been the mysterious figure, A. G. Lleva, to whom the latitude and longitude scales are attributed. All in all, an extremely important map that redefined the cartography of southern Veracruz state and influenced two 19th century Mexican Wars.