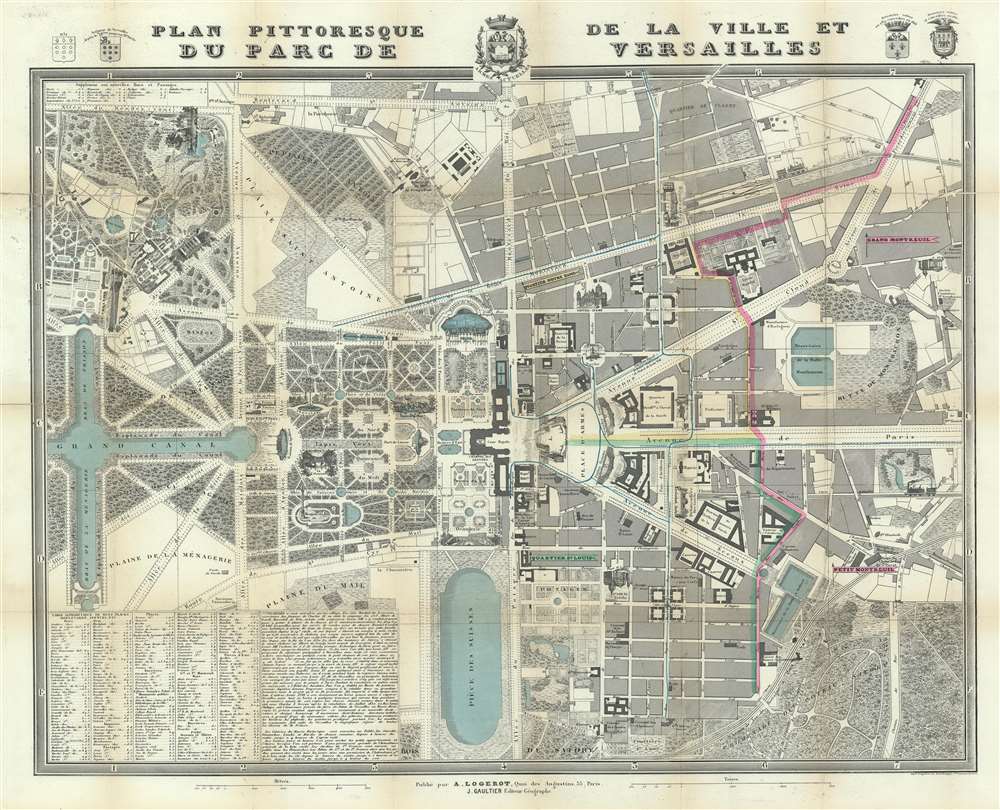 Illustrates the Palace of Versailles and its magnificent gardens.

This is an 1854 Auguste Logerot city map of plan of Versailles, France. The map depicts the region from the Grand Trianon to the Butte de Montbauron and from the Boulevard St. Antoine to the Bois de Satory. Highly detailed, myriad locations throughout are labeled. The Gardens of Versailles are illustrated in detail and identifies the paths, pools, and fountains, as well as the Grand and Petit Trianon. Parts of the palace are also labeled, although in not as much detail. Both the Senate and the National Museum are identified as occupying parts of the chateau itself. Outside the Domain of Versailles, the city is also shown in some detail, labeling numerous buildings, including the prefecture, the city hall, the hospital, and the market. The view of Versailles from the Place d'Armes is illustrated in profile, as is the Church of Notre-Dame and the train station that greets visitors from Paris. An index of locations throughout the map is situated in the lower left corner and lists streets, boulevards, and squares, among others.

This map was published by Auguste Logerot and J. Gaultier in 1854. Examples of this map are included in the collections of the Bibliotheque Nationale de France, Stanford University, and the Biliotheque intervuniversitaires Sainte-Genevieve in Paris. It is rare on the private market, making this a charming addition to any Francophile's collection, particularly with its wonderfully detailed depiction of the Gardens of Versailles.