1863 Spangenberg Map of the Battle of Vicksburgh, Mississippi, Civil War 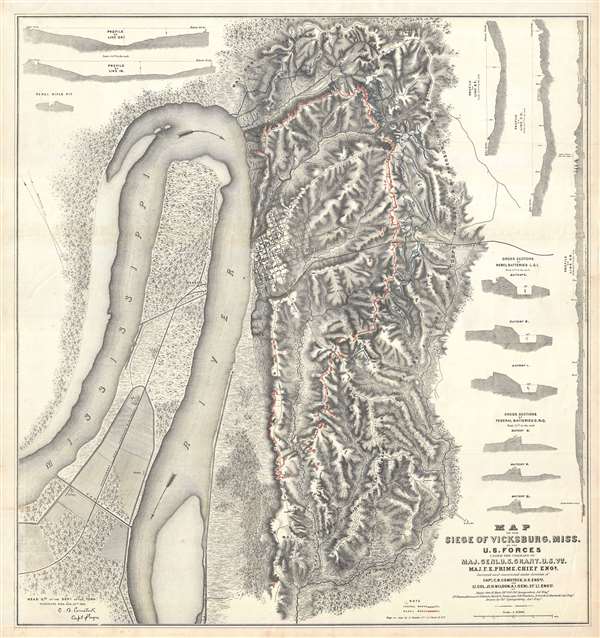 1863 Spangenberg Map of the Battle of Vicksburgh, Mississippi, Civil War

Rare Civil War map of the Battle of Vicksburgh from Spangenberg manuscript.
$500.00

This is a rare c. 1863 separate issue Charles Spangenberg Civil War map of the Siege of Vicksburg (May 18, 1863 - July 4, 1863). This map, considered one of the most attractive Civil War maps, is based upon a manuscript map drawn by military engineer Charles Spangenberg shortly after the siege. It covers Vicksburg and the surrounding hills as well as the full bend of the Mississippi River. To the right of the map there are various cross sections illustrating the Confederate and Union fortifications.

The Siege of Vicksburg (May 18, 1863 - July 4, 1863) was a major military action in the American Civil War. During the campaign, Union commander Ulysses S. Grant crossed the Mississippi River south of Vicksburg at Bruinsburg with the Army of the Tennessee and drove northeast, winning battles at Port Gibson, Raymond, and Jackson. By May 14, he had forced Confederate Forces under John C. Pemberton into a defensive position around Vicksburg – the last major Confederate stronghold on the Mississippi River. Pemberton was under orders from Lee to hold Vicksburg at all costs and despite depleted forces, established a defensive perimeter and batteries around Vicksburg. Outmanned and out maneuvered, Pemberton's only hope was reinforcement from the Confederate Army of the West, which never materialized. After weeks of bloody siege warfare, Pemberton sued for peace on July 3rd and formally surrendered on July 4th. The capture of Vicksburg completed the second part of Grant's Anaconda Plan, cutting off Confederate communication with the Trans Mississippi and is considered, along with Lee's defeat at Gettysburg, a major turning point in the war.

This map is commonly dated 1863 due to the date appearing in the lower left quadrant. That date, however, refers to the Spangenberg manuscript, which survives at the Library of Congress. Most likely this map was issued shortly after the war, probably in 1865. There are several variants, including a reduced version that was issued in the 1880s. The present example, on fine heavy stock, is the original printing prepared in New York by engraver Joseph Schedler. Of curious note, the scale on the map, 1:15740 is wrong, with the actual scale coming it at 1:17000.

Charles Spangenberg (fl. c. 1862 – 1864) was an assistant topographical engineer active with the Union Army during the American Civil War. His name is attached to at least one important Civil War manuscript maps, that being a map of the Battle of Vicksburg. He may be the same Charles Spangenberg who moved with his brother Frederick Spangenberg to Woodbury Minnesota, possibly benefiting from a Civil War pension, in 1869. If so, the farmhouse he built is now on the national register of Historic places.


Joseph Schedler (April 22 1813 - December 12, 1887) was a New York based engraver, printer, lithographer, and globe maker active from about 1850 to at least 1889. Schedler was born in Germany and immigrated to the United States sometime before 1848. He was active from at least 1850 when he partnered with fellow German immigrant, the landscape artist, painter, and engraver, Theodore August Liebler (1830 – 18??), to found the lithography firm of Schedler and Liebler, 129 William Street. He firm completed engraving work for J. H. Colton as early as 1852 but probably dissolved by 1854. He filed a patent in 1878 for a crystallotype machine, a device the employed electrotyping to print textured crystalline surfaces. He is best known today as a globe maker. Joseph Schedler's globes won prizes at the Paris International Exhibition in 1867, the American Institute Fair in 1869 and the Vienna International Exhibition in 1873. From at least 1876 records suggest he relocated to Jersey City, New Jersey. Schedler's son, Herman, was also a globe maker, and inherited his father's business sometime around 1877, producing globes will to about 1901.