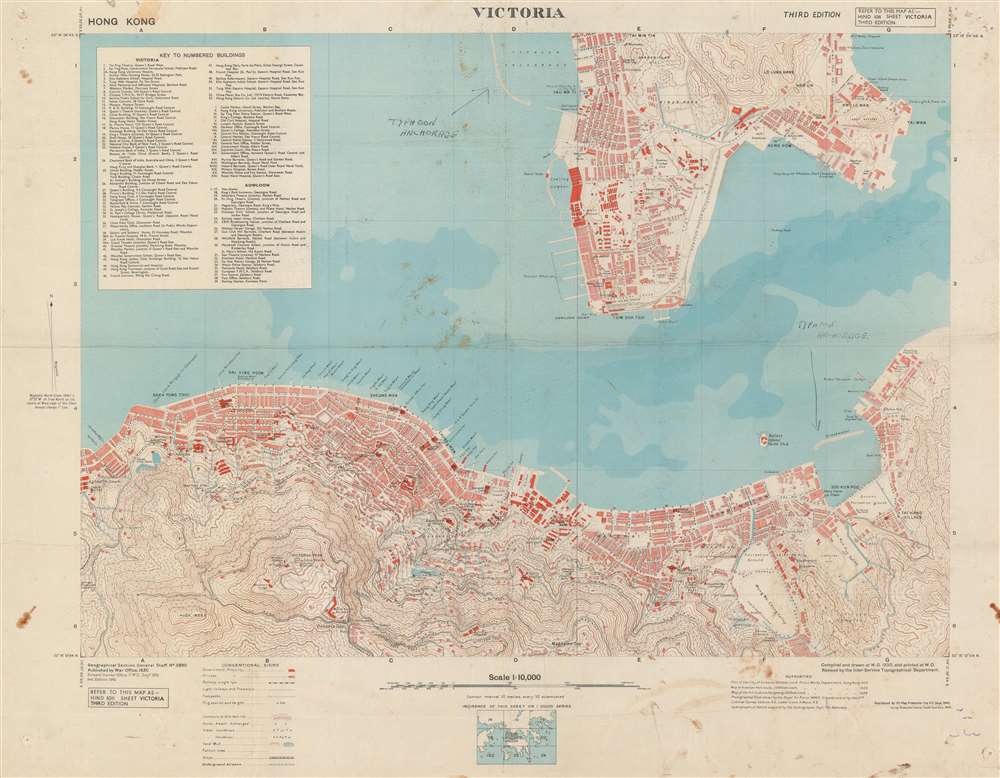 A British War Office map of Victoria, Singapore at the end of World War II

This is a 1945 British War Office map of Victoria, Hong Kong. The map depicts the city from North Street to Kowloon Bay and from Tai Min Tin in Kowloon to Magazine Gap in the hills south of the city. Highly detailed, many streets throughout Victoria and Kowloon are labeled. Buildings in both Victoria and Kowloon are identified, including the Kings College, the lunatic asylum, the Supreme Court, several barracks, and the Royal Naval Yard, and individual buildings are illustrated, though unlabeled. Two manuscript notations bring attention to the two typhoon anchorages in the harbor, both of which are protected by breakwaters. The topography to the south and east of the city is noted by contour lines.

The Imperial Japanese began the invasion of Hong Kong on December 8, 1941, effectively the same day as the surprise attack on Pearl Harbor, since Hong Kong lies across the International Date Line from the Hawaiian Islands. The British surrendered to the Japanese on December 25, 1941, which the locals referred to as 'Black Christmas'. The Japanese never faced an Allied invasion of Hong Kong and occupied the region until after the Americans dropped the nuclear bombs on Hiroshima and Nagasaki. The official Japanese surrender of Hong Kong to the Royal Navy took place on August 30, 1945, three days before the Japanese signed the unconditional surrender in Tokyo Bay on September 2.

This map was originally created by the War Office in 1930, with two subsequent editions in 1931 and 1945. The present example was printed in 1945. We are aware of four examples in institutional collections at Pennsylvania State University, Dartmouth, the University of Ottawa, and the National Library of Scotland.