1869 Whitehead Map of Victoria, Australia, During the Victoria Gold Rush 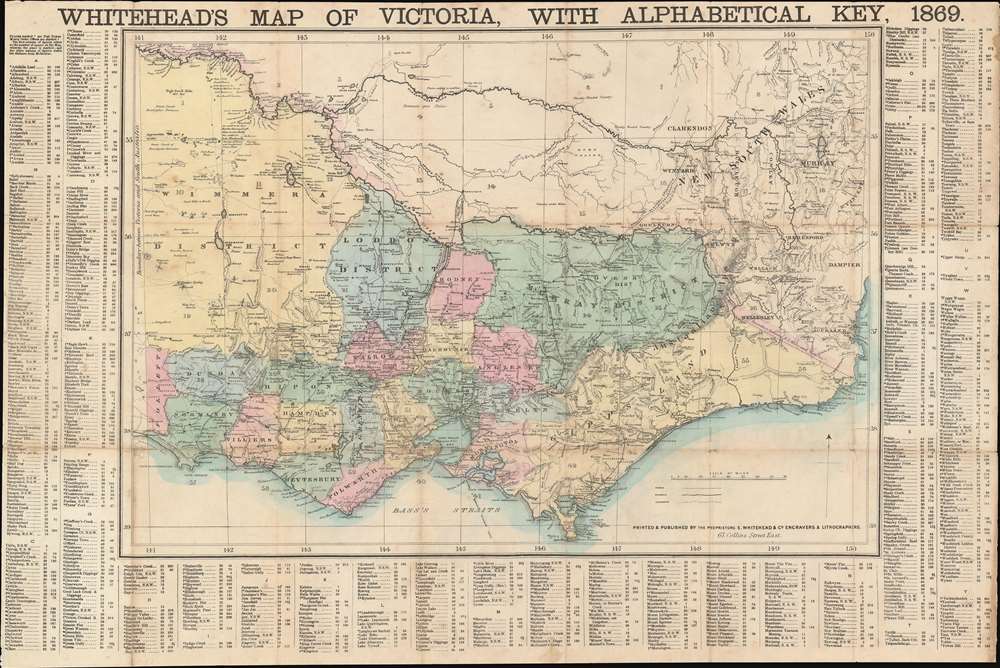 1869 Whitehead Map of Victoria, Australia, During the Victoria Gold Rush

An extremely rare map of Victoria, Australia at the end of the Victoria Gold Rush.
$1,800.00

This is an 1869 Whitehead map of Victoria, Australia near the end of the Victoria Gold Rush. The map depicts the region from the border between Victoria and South Australia to New South Wales and from New South Wales to Bass's Straits and Wilson's Promontory. Highly detailed, myriad cities, towns, villages, and even smaller settlements are labeled throughout Victoria and are listed in an index of literally hundreds of locations that frames the map on three sides. Individual dig sites are identified in Loddon District and elsewhere. A series of manuscript 'X's appear in Wimmera District (situated on the map's left side) and Rippon District, which could indicate the claims of a prospector, and, if so, a case when X actually did mark the spot! Roads, railroads, and telegraph lines are also noted, as are points and bays along the coastline. Small annotations are included here and there, commenting on vegetation and other physical features, as well as things such as the 'electric telegraph to Adelaide'. Districts are labeled and shaded different colors to allow for easy differentiation.

The Victoria Gold Rush, which lasted from 1851 until 1869, with the announcement that gold had been found in Loddon District. With that, fortune-seekers from all over the world began pouring into Victoria. Literally hundreds of towns began to spring up out of the ground and, seeing what was ahead, the British government allowed the Port Phillip District to secede from New South Wales to create the Colony of Victoria. Melbourne had a population of around 29,000 in 1851, which grew to over 500,000 by 1861, and then to 700,000 by 1869. Gold production in Victoria exceeded all other gold producing regions in the world, with the exception of California, with its highest annual yield reaching 3,053,744 troy ounces in 1856. It is estimated that between 1851 and 1896 a total of 61,034,682 ounces of gold were extracted from mines in Victoria.

This map was published printed and published by Edward Whitehead and Company in 1869, making it an early edition in one of the most successful series of regional maps of Australia ever produced. That said, this map is very rare, with only four examples cataloged in the OCLC as part of institutional collections at the University of Queensland, the State Library of New South Wales, the National Library of Australia, and the State Library of Victoria, all of which are in Australia. It is also extremely rare on the private market, with only a half-dozen examples from the entire run of the series appearing at auction in the last two decades.

Edward Whitehead (fl. 1864 - 1897) was a printer and publisher active in Melbourne during the latter half of the 19th century. Whitehead founded his printing business at 67 Collins Street East in 1864 and, though not focused on maps, began publishing his eponymous series of map of Victoria in 1867. Whitehead saw an opportunity to produce highly accurate and detailed convenient folding maps of Victoria that incorporated an incredibly detailed index of place names for the newly-arriving immigrants and fortune seekers who flooded Victoria during the Victoria Gold Rush. His series of map of Victoria became one of the most successful and most profitable regional maps of Australia ever produced. Learn More...