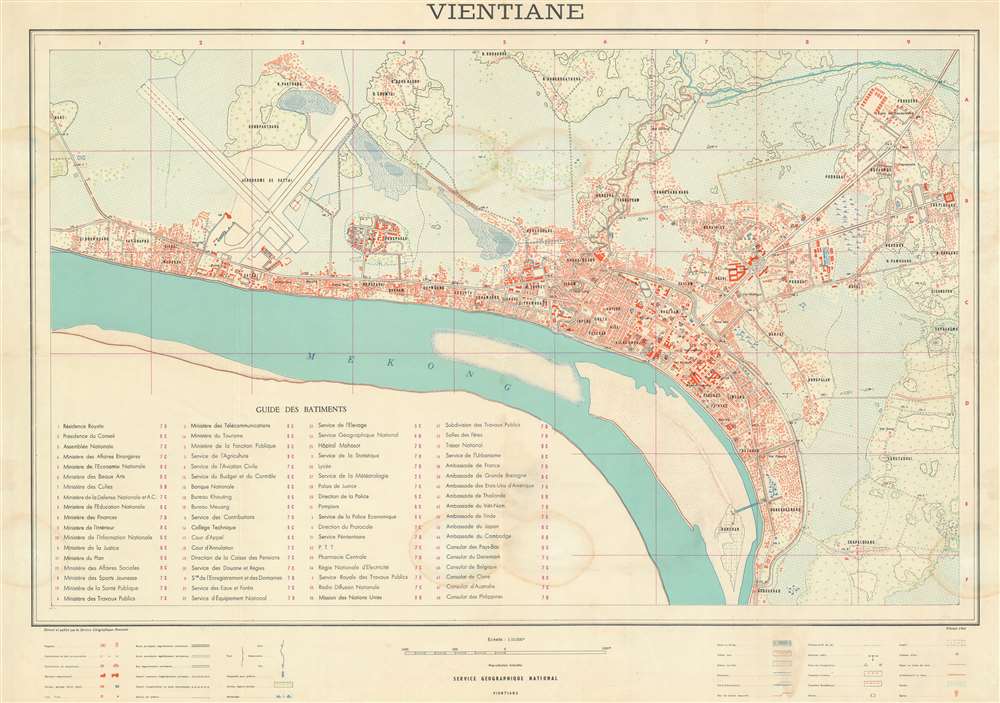 This is a scarce 1961 large format city plan or urban map of Vientiane, Laos executed by the Service Géographique National at the height of the 'Secret' Laotian Civil War (1959 - 1975) and the Laos Crises (1961 - 1960). This is an official map constructed for administrative purposes following the 1954 Laotian independence from France. Highly detailed, the map covers all of Vientiane as it hugs the northern shore of the Mekong River, from Sibounhuang to Khouakhao. It extends northeast to include Ponkheng, the police school, and Thatlouang. In the old town center, a numeric key identifies some 48 government offices, foreign embassies and consulates, and public buildings.

From its independence from France, the United States recognized Laos as a linchpin for the region. Although small and sparsely populated, Laos was strategically located between Communist China and North Vietnam - where the Vietnam War (1955 - 1975) was ongoing. The United States invested both money and resources it establishing Laos as an anti-communist bastion, but, as one chronicler put it, Laos was a victim of geography: a RAND study of the period summarized the nation as

Hardly a nation except in the legal sense, Laos lacked the ability to defend its recent independence. Its economy was undeveloped, its administrative capacity primitive, its population divided both ethnically and regionally, and its elite disunited, corrupt, and unfit to lead.

By the time this map as issued, with U.S. Surveying assistance, Laos was heavily fragmented between the U.S. Backed General Nosavan Phoumi, the neutralist Kong Le, and the Soviet backed Communist forces of Pathet Lao. Unwillingness to commit military forces to Laos for fear of escalating an armed confrontation with Russia, the Kennedy administration attempted to negotiate a cease-fire and coalition government, but ultimately, by 1975 Laos fell under the sway of the North Vietnamese.

This map was published by the Service Gégraphique National, a national mapping agency based in Vientiane Laos. This appears to be the first edition, 1961. Subsequent editions were published in 1963, 1966, 1970, and potentially other dates. All examples are rare, with no market history and limited institutional representation. The present edition is evident only at the British Library, St. Pancras.