1838 Taberd Map of Vietnam - synthesis of Vietnamese and Western Cartography 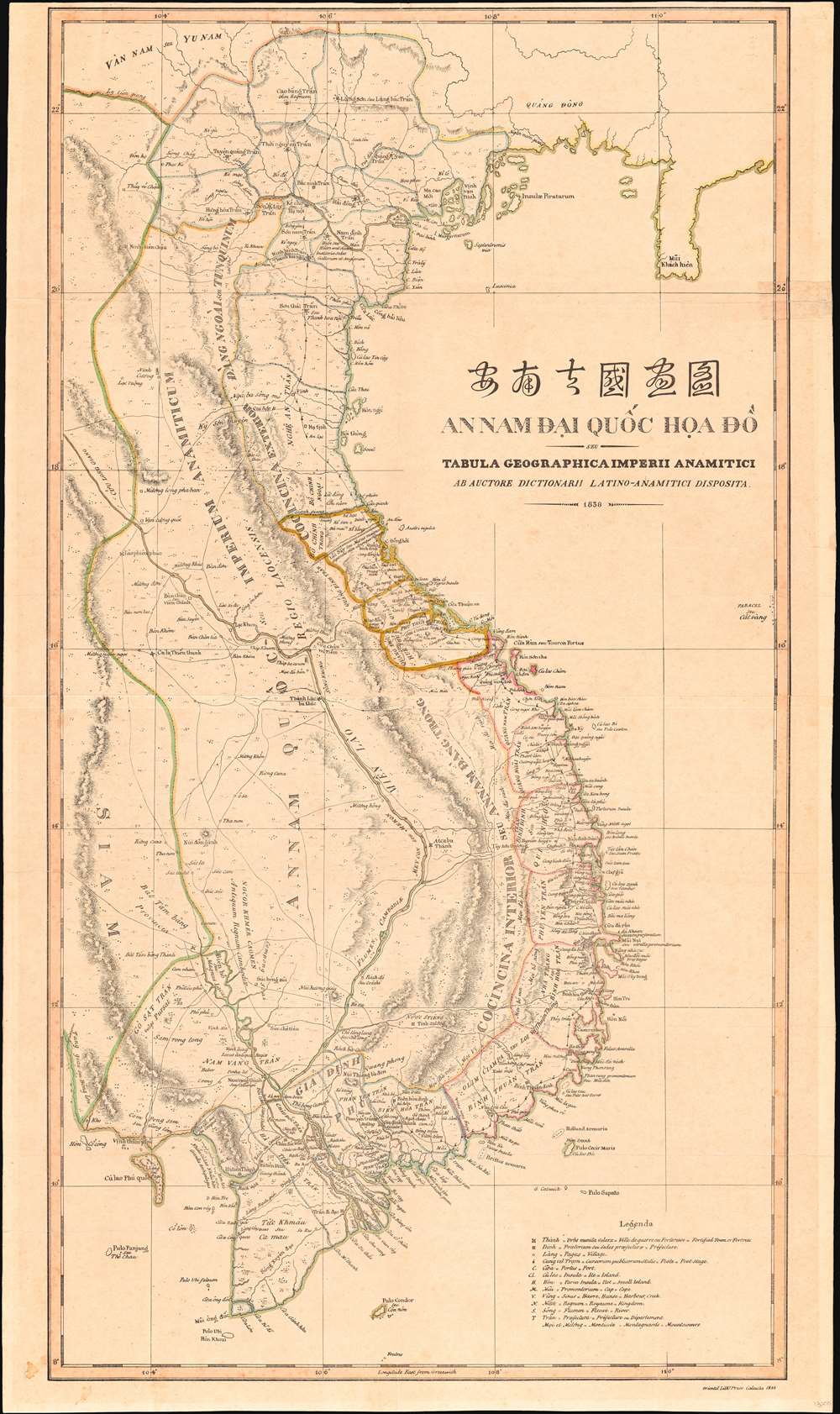 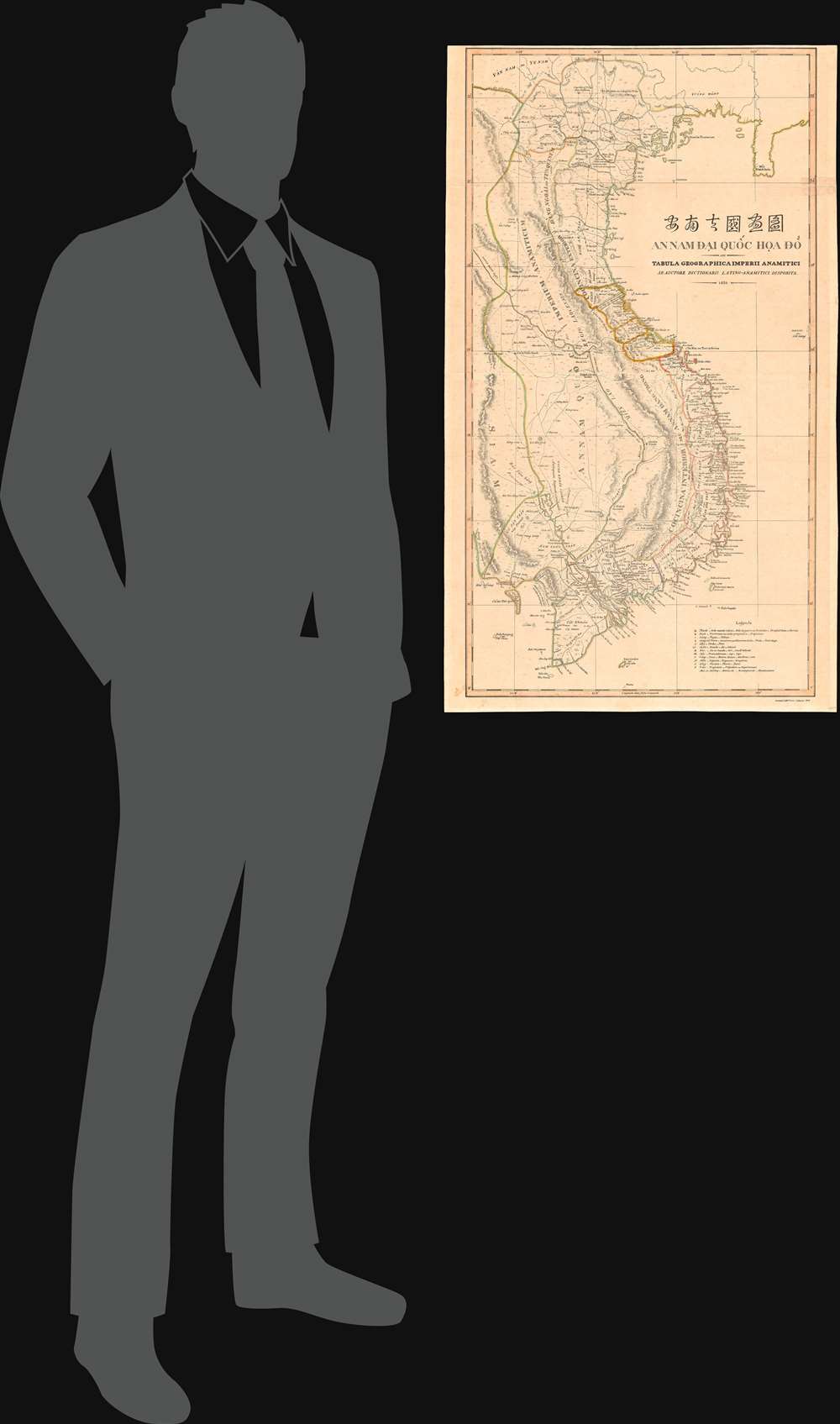 1838 Taberd Map of Vietnam - synthesis of Vietnamese and Western Cartography

'The Bishop's Map', being a combination of western and Vietnamese cartography and the best map of Vietnam in the pre-Colonial era.
$14,000.00

Known as the 'Bishop's Map', this is an exceptional and important 1838 map of Vietnam by Jean-Louis Taberd, a French missionary. Printed in Calcutta, India, the map is based on Taberd's roughly 10 years of missionary work in Cochinchina, modern-day southern Vietnam, under the Nguyễn Emperors, and is thus the first major advancement on Vietnamese cartography since the 1653 Alexander de Rhodes map of northern Vietnam. The map illustrates the Nguyễn Empire at the height of its power and influence, near half a century before the French interventions and subsequent colonization known as 'French Indochina'.

The map illustrates the expansive claims of the Annamese Empire at its height, reaching west to just beyond Tonle Sap Lake, where it meets the Siamese border, thus embracing most of modern-day Cambodia and Laos. Cartographically it is a synthesis of Vietnamese administrative cartography and western techniques. To make the map, Taberd consulted with Vietnamese 'chain and compass engineers' who mapped the Mekong in great detail - bringing its full extent to western maps for the first time. Similar efforts allowed him to place with reasonable accuracy Vietnamese forts and settlements throughout. While he lamented the Vietnamese refusal to embrace western cartographic norms, such as longitude and latitude, he argued that his unique synthesis of styles produced 'the best and most detailed map that had yet appeared.'

Many early maps of Vietnam include a long 'Great Wall of China' style wall in Quảng Ngãi province separating north and south Vietnam, or in this case the Trịnh and Nguyễn, respectively. The 1819 wall was built by Lê Văn Duyệt (1763/4 -1832), a general in service to Gia Long, ostensibly to protect villages from upland minority raids. Although it appeared on several early maps, the wall quickly became overgrown and was forgotten until rediscovered in 2005 by archeologists of the of École Française d'Extrême-Orient. New research suggests that the construction of the wall was not as one-sided as it may seem. Although surviving written references to the wall are exclusively in the Việt tradition, it is likely to have been a joint effort by both the Việt and Hrê peoples to create a secure defined border to mutual benefit.

The map illustrates Vietnam at the end of Emperor Gia Long's (1762 - 1820) reign and in the early days of Minh Mạng's (1791 - 1841) reign. French missionaries were well treated by Gia Long, but Minh Mạng despised and feared them. By 1833, he had either banished or executed most active missionaries, including Taberd, who fled to Calcutta. Where Gia Long was a great conqueror, Minh Mạng was a great consolidator, bringing his predecessors conquests under central administrative control on the Chinese tributary model. By the end of Gia Long's reign, there remained only two great powers in Southeast Asia: Siam and Vietnam. The smaller countries between, the declining Khmer Empire of Cambodia and the Kingdom of Laos, were fully absorbed by the larger empires. In conquered Cambodia, we see old Khmer names replaced by Vietnamese prefectures and a new capital has been established at Nam Van Thành (Phnom Penh).

In addition to its historical importance, this map has modern-day significance for its illustration of the Paracel Islands (西沙群岛, Quần đảo Hoàng Sa ) as unambiguously Vietnamese. The Emperor Gia Long (1762 - 1820) conquered and claimed the islands in 1816. Although little more than coral atolls, the islands are strategically located to control the South China Sea. Today, sovereignty over the Paracels is a hotly disputed matter of international contention. During the Battle of the Paracel Islands (January 1974), the PRC expelled the Vietnamese and took control. Since that time, China, Vietnam, and Taiwan have all claimed de jure sovereignty. In 2016, an international arbitrational tribunal led by the United Nations ruled in favor of Vietnam's claims. Nonetheless, China declared the tribunal illegal and remains the occupying force. At the time this map was drawn, Taberd didn't think much of the Paracels,

The Pracel or Paracels, is a labyrinth of small islands, rocks and sand-banks, which appears to extend up to the 11th [sic.] degree of north latitude, in the 107th parallel of longitude from Paris. . . Although this kind of archipelago presents nothing but rocks and great depths which promises more inconveniences than advantages, the king Gia Long thought he had increased his dominions by this sorry addition. In 1816, he went with solemnity to plant his flag and take formal possession of these rocks, which it is not likely anybody will dispute with him.

This map was published for inclusion in Jean-Louis Taberd's Latin-Vietnamese dictionary, Dictionarium Anamitico-Latinum. The book and map were printed in Calcutta, India, where Tabard lived at the time. The map was printed by the Oriental Lithographic Press, Calcutta. The Dictionarium is represented at several institutions but is extremely scarce to the market.

Jean-Louis Taberd (June 18, 1794 - July 31, 1840) was a French missionary active in Vietnam in the early 19th century. Tabard was born in Saint-Étienne, France, and ordained priest in Lyon in 1817. In 1820, he joined the La Société des Missions Etrangères de Paris, who appointed him to Cochinchina - part of modern-day Vietnam. He became the Victor Apostolic of Cochinchina in 1827, in 1830 Bishop of the titular see of Isauropolis (a defunct bishopric in Turkey), and in 1838 the Vicar Apostolic of Bengal. In 1825, the Emperor of Vietnam, Minh Mạng (1791 - 1841) banned all missionaries. Those that remained, mostly French Catholics, were in constant danger. Between 1833 and 1838, no less than seven were sentenced to death. Tabard fled in the early 1830s to Penang, then Calcutta. There, 1838, he published his famous Latin-Vietnamese dictionary, Dictionarium Anamitico-Latinum. Tabard died in Calcutta. Although Tabard did not return to Vietnam, in the late 19th century the Catholic college Institut Taberd was founded in Saigon by the Brothers of the Christian Schools and, since 1943, educated the Vietnamese elite. Learn More...


Oriental Lithographic Press (1829/30 - c. 1841) was a publisher and lithographic printer active in early 19th century Calcutta, India. The firm was founded by Jean-Baptiste Athanase Tassin (May 3, 1800 - January 25, 1868). Tassin was the naturalist on a French government ship and therefore a master draughtsman. The shipwrecked in the Malayan archipelago and Tassin somehow worked his way to Calcutta. There, receiving a loan of 10,000 Rupees from Henry Toby Prinsep, he began a small publishing house specializing in government work. His skill as a draughtsman brought him business as map printer, and he often received government contracts for such work, taking precedence over official government-operated presses. Hs business lasted until about 1941, but it is said that he left India around 1839, with a considerable next egg of some 16,000 GBP. He was described with praise in the Calcutta Courier (June 27, 1832),

Mr. Tassin is a gentleman of much sterling worth. He is the most successful of all the lithographer of the East, but he owes much to the aid afforded to him by the experience of others. His zeal, and I may say enthusiasm, for lithography, as well as his industry and perseverance, make up for much of the other requisites.