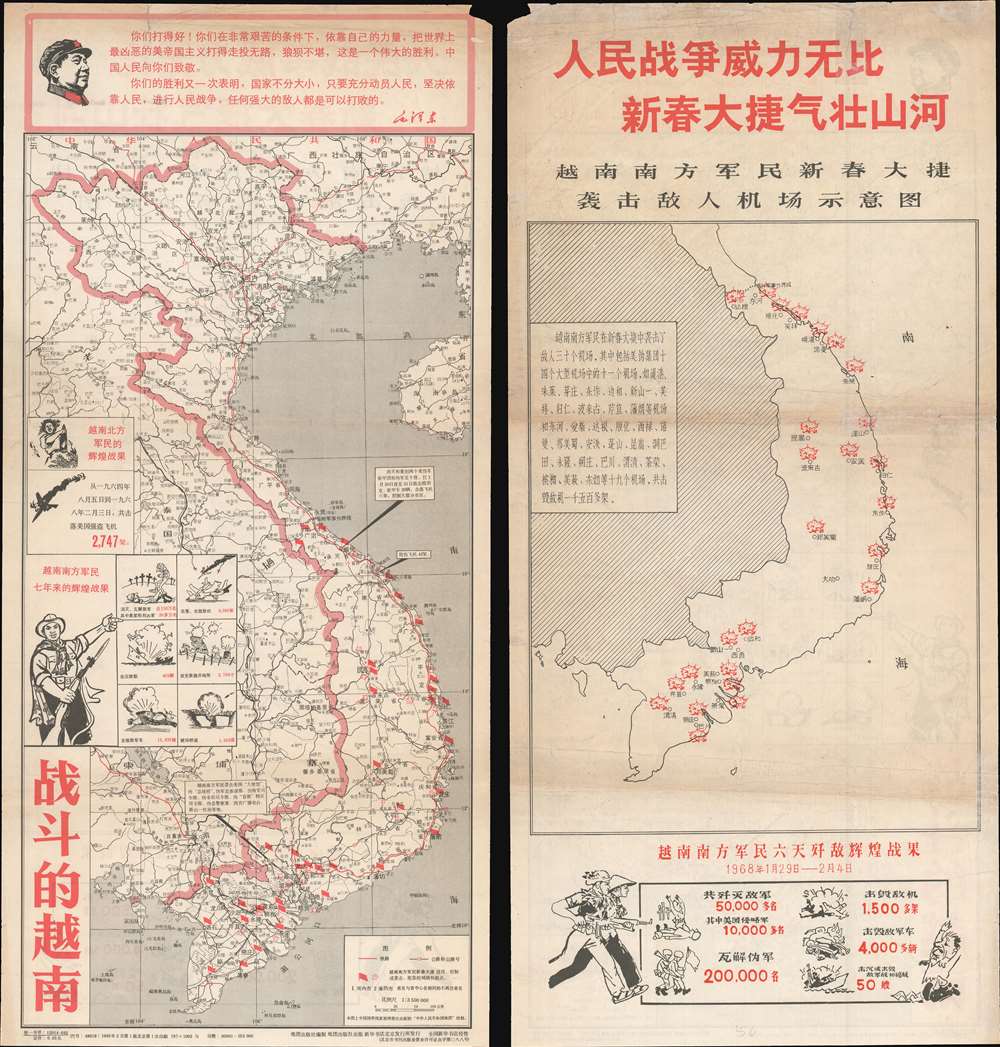 This is a 1968 Communist Chinese propaganda poster map of Vietnam published weeks after the Viet Cong launched the Tet Offensive, one of the most dramatic turning points of the Vietnam War. Maps of Vietnam are printed on both sides of the sheet, each focusing on different aspects of the war.

Statistics, Geography, and a Quote from Mao

A highly detailed map of the region is printed on the front. Myriad locations throughout Vietnam are labeled in Chinese, and Vietnam's major highways and railways are illustrated. Red flags mark the cities and towns attacked during the Tet Offensive. Along the left border, text boxes with small illustrations laud Vietnamese victories and provide statistics about Vietnamese successes. The first box states how many planes had been shot down over North Vietnam, while the other six state the number of planes shot down, boats sunk, enemy soldiers 'eliminated and disintegrated', and bridges and vehicles destroyed. A quote along the top, attributed to Mao, reads

You guys play well! Under very difficult conditions, relying on your own strength, you have defeated the most ferocious U.S. imperialism in the world, and they are in a state of embarrassment. This is a great victory. The Chinese people salute you. Your victory once again shows that whether the country is big or small, as long as the people are fully mobilized, resolutely rely on the people, and carry out the people's war, any powerful enemy can be defeated.

The Verso Map - The Tet Offensive

The map printed on the verso bears the subtitle 'The glorious results of the southern Vietnam military and civilian annihilating the enemy in six days January 29, 1968 - February 4, 1968.' Red explosions mark cities attacked during the offensive. Statistics below the map highlight Vietnamese victories in the form of enemy soldiers killed (the number of Americans is singled out), planes and vehicles destroyed, and ships sunk. To reinforce their point, two fierce-looking North Vietnamese troops, armed with assault rifles, are illustrated striding toward a disheveled, surrendering American.

January 30, 1968, marked the beginning of the Tet Offensive, one of the largest offensives of the Vietnam War. A combined attack launched by the Viet Cong and the North Vietnamese People's Army of Vietnam, the Tet Offensive was a series of coordinated surprise attacks launched against both military and civilian targets. All told, the North Vietnamese struck more than 100 towns and cities, including Saigon, the capital of South Vietnam, and 36 of 44 provincial capitals. U.S. forces were completely unprepared for the coordinated assault and by the second week of February, when the offensive was over, had suffered over 1,500 killed and more than 7,500 wounded.

This map was created and published by Xinhua Bookstore in February 1968. We do not see this map catalogued in any institutional collections, and it does not appear in auction records or dealers' catalogues.