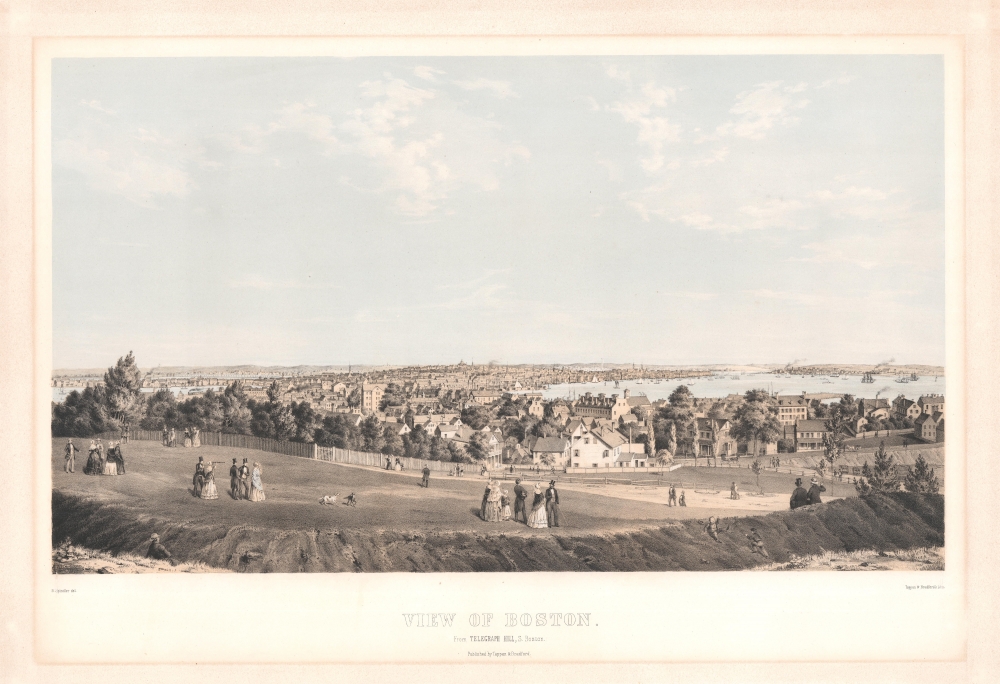 This is an 1854 Bernard Spindler low-perspective bird's-eye view of Boston, Massachusetts. The view looks northwards towards Boston from Telegraph Hill, in modern-day South Boston. In the foreground, elegant citizens promenade over Telegraph Hill. On the left, a young woman with a telescope observes the city. Urban Boston occupies the foreground. As this map predates most major landfill initiatives, the Mill Dam and Boston Neck are evident at left. Elegant church spires fill the horizon. The curve of Boston Harbor, full of ships of commerce is evident at center right. Smoke billows from multiple tall stacks, at the time a sign of economic prosperity (as opposed to pollution). South Boston, just in front of Telegraph Hill, is full of well-appointed yet modest New England homes.

This view was drawn by Bernard Spindler and published by Tappen and Bradford in 1854. We note a single example cataloged in OCLC, part of the collection at the Boston Athenaeum. Scarce.

Bernard Spindler (December 30, 1825 - December 29, 1865) was a German-American artist and lithographer. Born in Germany, Spindler died one day before his fortieth birthday from consumption. He married Rosalia Stetfilt, another German immigrant, on May 27, 1851. Learn More...


Ebenezer Tappen (September 11, 1815 - January 25, 1854) was an American engraver, lithographer, and publisher. Born in Manchester, Massachusetts, Tappen began working for a banknote and letterhead engraver in Boston in 1837. He worked as an engraver and lithographer from the same address, 39 State Street, until late 1848 or early 1849, when he formed a partnership with Ludowick Harrington Bradford (November 10, 1820 - December 13, 1885), another engraver and lithographer in Boston. The pair operated Tappen and Bradford until Tappen's death, when Bradford started his own firm called L.H. Bradford and Company. Learn More...


Lodowick Harrington Bradford (November 10, 1820 - December 13, 1885) was a Boston based engraver lithographer active in the second half of the 19th century. Bradford was born in Boston, Massachusetts. He studied as a line engraver before transitioning to the then new art of lithography. He even invented his own photolithographic ambrotype process that created a durable photographic picture on lithographic stone. In 1849 he partnered with Ebenezer Tappen (1815 - 1854) to form the Boston firm of Tappan and Bradford. The partnership remained active until Tappan's untimely death in January, 1854. From 1854 to 1859 Bradford continued to operate the firm, but the imprint changed to 'L. H. Bradford and Company.' It is not clear who the 'and Company' was, possibly Tappan's heirs? From late 1859 until his 1870, he printed under 'L. H. Bradford.' His last known lithographs appeared in 1860, but he did continue copper and steel engraving until his death. Bradford was married to Martha Brown, from an old Gloucester Family. After his wedding in 1849, he divided his time between Gloucester and Boston. In Gloucester he made the acquaintance of the local painter Fitz Henry Lane (1804 - 1865) and worked with him to produce several views in the 1850s. He died on the road between Boston and Gloucester in 1885. Learn More...