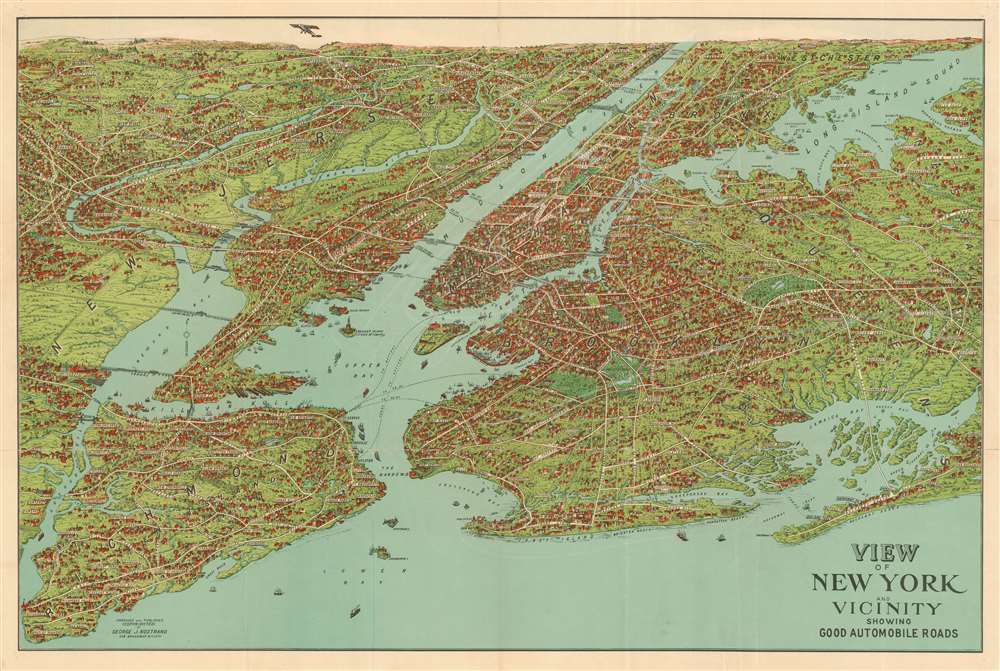 This is an engaging 1928 birds-eye view map of New York City and vicinity by George J. Nostrand. Brightly colored and evocative, the view presents New York City and its surrounds at the height of 'the Roaring Twenties.' As the title suggests, it was meant to highlight the most auto-friendly of New York City’s roads during an era in which the automobile was still a relative novelty and the outer boroughs not yet fully developed. Ferry routes are prominently shown, and the East River is spanned by the Brooklyn, Manhattan, Williamsburg and Queensboro Bridges. All five New York City Boroughs are represented, and the map encompasses Westchester County, Bergen County and Nassau County in Long Island. In addition to major roads, the map details specific neighborhoods, the character of their development and topography beautifully rendered. Individual landmarks, buildings and bridges are illustrated throughout, including the Statue of Liberty, Ellis Island, Grand Central, Madison Square Garden, Museum of Natural History, and Metropolitan Museum of Art. The harbor is full of ships while an airplane - in fact, Charles Lindbergh's Spirit of St. Louis - soars over Paterson.

When in the Twenties?

Although the view is not dated, the detail of the map narrows the window considerably. Rumsey's date of 1925 is incorrect. The Spirit of St. Louis did not have its first flight until April of 1927, and the Holland Tunnel was completed and named that year. It is named on this map. The George Washington Bridge appears as 'proposed;' it was constructed between September 1927 and 1931, and would not be named until completion. (We are aware of a further state of the map with this 'proposed' notation removed, but still with no name for the bridge.) The Goethals Bridge, also unnamed and marked 'proposed' was constructed between 1925 and 1928. Between the early limit set by the aircraft and the tunnel, and the late one set by the bridges, we would feel comfortable dating the production of this map at 1927 or 1928. OCLC lists both a 1928 and a 1929 issue. This map appears to be based on an earlier 1902 map by August R. Ohman, whose office was in the same building as Nostrand until 1925. This particular view was copyrighted, engraved and published by George J. Nostrand, whose shop was a few blocks north of the Woolworth Building, from whose observation deck this map was sold.

OCLC shows two examples of the 1928 state and three of a further 1929 state in institutional collections. This present example is of the 1928 issue.

George J. Nostrand (fl. 1920-30) was an American lithographer and publisher of maps and views, primarily of New York City. He appears to have been in the employ of the Arthur Ohman Map Co. until the firm’s closing in 1925. Thereafter he operated from the same location under his own name as late as 1939.