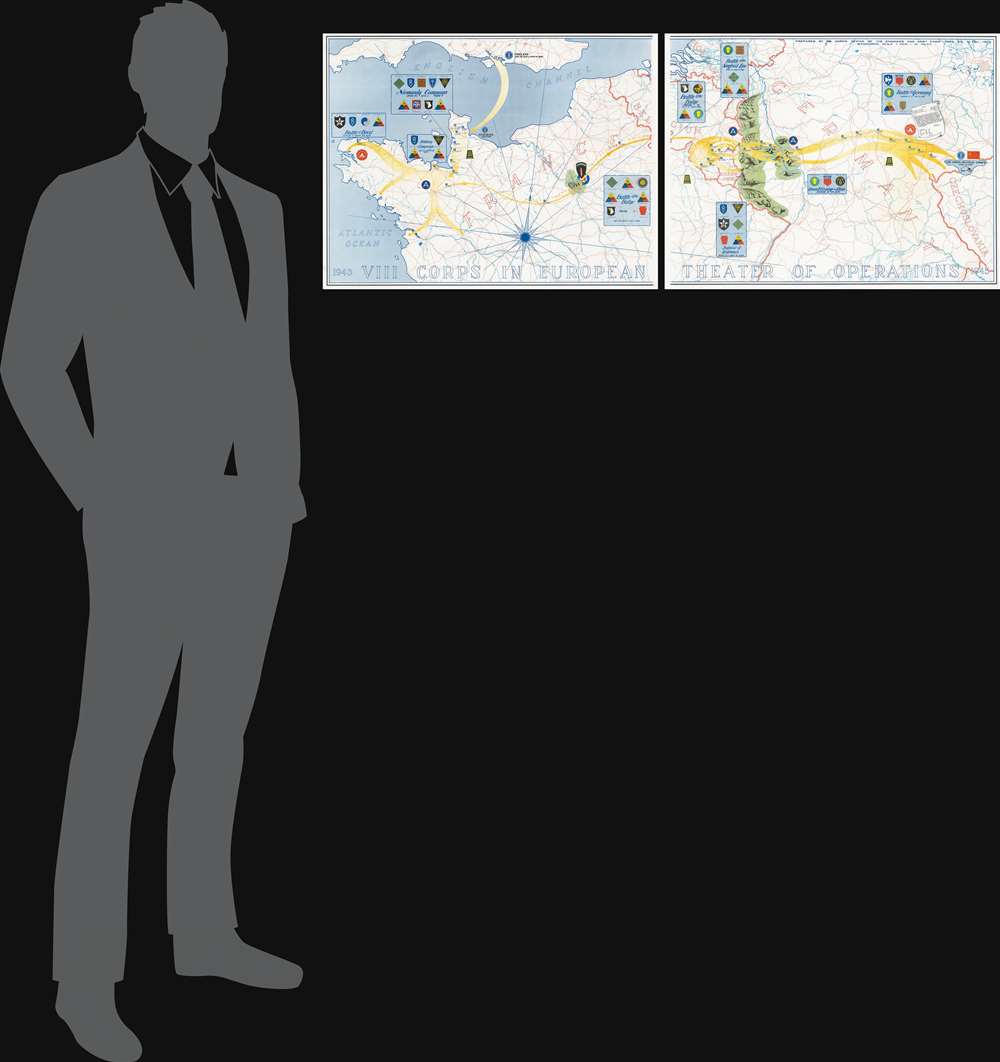 Follow the VIII Corps across Europe from Normandy to the German-Czech border.
$1,750.00

Printed on two separate sheets, this is the 1945 VIII Corps route map of the VIII Corps in the European Theater during World War II. The map broadly follows the movements of the units attached to the corps throughout the Theater. Boxes highlight the different campaigns, provide the dates during which they took place, and include the insignia of the divisions involved. The insignia for SHAEF (Supreme Headquarters Allied Expeditionary Force) is illustrated near Paris (itself marked by the Eiffel Tower, the Arc de Triomphe, and Notre Dame), where General Eisenhower moved his headquarters once the city had been liberated and secured. Yellow arrows follow the corps’ movements, with emphasis placed on the Battle of the Bulge and the Battle of Germany. Small blue flags mark cities and towns where VIII Corps Headquarters was located from October 1944 through May 1945. The vaunted Siegfried Line is shaded in green, and illustrations highlight the fortifications built by the Germans. An artistic rendering of the bulletin sent by the commanding general of the VIII Corps to all the units under his command announcing the German surrender appears just below the box detailing the Battle of Germany.

A Short History of the VIII Corps in World War II

The VII Corps was reactivated on October 14, 1940 at Fort Sam Houston, Texas. The Corps was made operational on June 15, 1944, in Normandy, France, and occupied defensive positions west of Carentan. The Corps fought in Normandy throughout the rest of July, liberating several cities and towns and a key road junction. As American forces were preparing for their breakout from Normandy and what turned into a speedy advance across France, the VIII Corps was instead assigned the mission of advancing to the west to liberate Brittany and the important Breton ports of Saint-Malo and Brest. The Corps liberated all Breton ports by September 19, 1944, but unfortunately the Germans had done such an effective job of demolishing them that the Allies could not use the Breton ports before the war in Europe ended. After Brittany, the Corps moved east and took up positions in the Ardennes, where the Corps served as a rest and orientation area for new U.S. divisions and those who had suffered heavy casualties in the Hürtgen Forest. The Corps still occupied this position when the Germans launched what has become known as the Battle of the Bulge, also known as the Ardennes Offensive. 6,700 inexperienced VIII Corps troops were taken captive early in the battle, while other units within the corps managed a fighting withdrawal. The famed 101st Airborne Division, celebrated for its defense of the encircled town of Bastogne, was part of the VIII Corps during the Battle of the Bulge. The siege of Bastogne was broken on December 26, 1944, and four days later units from the VIII Corps were on the counterattack. Elements of the Corps pushed through the Siegfried Line in mid-February and crossed the Rhine in mid-March. The Corps then fought through Germany throughout April before ending their journey on the west bank of the Mulde River not far from the border with Czechoslovakia. The VIII Corps fought in the Normandy, Northern France, Rhineland, Ardennes-Alsace, and Central Europe campaigns Headquarters, VIII Corps, was inactivated at Camp Gruber, Oklahoma, on December 15, 1945.

Maps tracing unit movements during World War II were created by both American and British forces both during and after the war. As a genre, these maps represent a wide range of aesthetics, from the purely functional that label places and provide dates, to the artistic, even comic. Many combine the two and provide a visually striking but historically informative summary of the unit's peregrinations.

After World War II erupted in Europe, U.S. military officials realized that currently available maps of Europe were inadequate for modern artillery units or even tactical purposes. Their solution was the creation of engineer topographic battalions. Engineer Topographic Battalions provided technical support for the U.S. Army in the form of surveying, drafting, and printing maps for units on the ground. During the war, these battalions were responsible for creating accurate four-color topographic maps, along with surveying, printing, and distribution of these maps.

This map was prepared by the VIII Corps Office of the Engineer and the 665th Engineer Topographic Company in May 1945. We note three cataloged examples in OCLC which are part of the collections at the Library of Congress, the Wisconsin Veterans Museum Research Center, and the University of California Berkeley. We note a handful of instances when this map has appeared on the private market.

The 665th Engineer Topographic Battalion (December 17, 1943 - December 1946) was part of the U.S. Army during World War II and provided technical support in the form of surveying, drafting, and map production. Activated on December 17, 1943, at Fort McCoy, Wisconsin, the battalion initially consisted of twenty-eight men and an officer from the 650th Engineer Topographical Battalion, and five other officers from other units. Members of the unit had participated in the Army Specialized Training Program and had experience in topographical survey and mapping processes along with photomapping and reproduction techniques. The battalion was also supplemented with personnel who had received the necessary training as civilians. The unit spent the almost all of 1944 training in the United States, which included marksmanship drills, chemical warfare, and demolition instruction, along with winter training exercises in Wisconsin testing the army's newest winter clothing. The battalion embarked for Europe in New York City on December 8, 1944, and arrived two weeks later in Avonmouth, England. It left for the Theater of Operations from Southampton on January 30, 1945, and deployed to Belgium where it set up operations in Altembrouck, Belgium, and Castle Mheer in Mheer, Holland. Once their equipment was ready, the battalion began creating topography mapos from aerial photographs and ground survey information for the Ninth Army. It produced over 3,000,000 impressions in the first month. They moved to Hoensbroek, Holland, with map storage and distribution staying in Maastricht, Holland. Two weeks later the battalion moved to Mönchengladbach, Germany. The unit moved several more times in March and April 1945 to remain near the Ninth Army headquarters. After the war in Europe ended, the 665th continued making maps and conducting surveys for the Occupation forces. By mid-June the battalion had moved back to France in preparation for redeployment to the Pacific. However, the war in the Pacific ended before they left France. Some of the men in the unit (those with enough points) were discharged starting in October while the rest were transitioned to Occupation duty. The unit was deactivated in December 1946. Learn More...