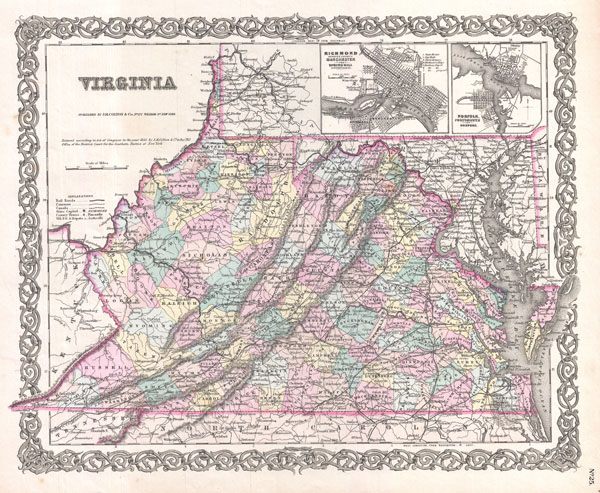 A beautiful 1855 first edition example of Colton's map of Virginia. Covers the entire state as well most of adjacent Maryland and parts of North Carolina, Kentucky and Tennessee. Predates split with West Virginia by seven years. Map is hand colored in pink, green, yellow and blue pastels to identify counties. Identifies towns, cities, railroads, roads and some topographical features. Features maps of Richmond (with Manchester and Spring Hill) and Norfolk (with Portsmouth and Gosport). Names the Cumberland Gap, Chesapeake Bay, Alleghany and Shenandoah Mountains, and the Dismal Swamp. Surrounded by Colton's typical spiral motif border. This is one of the few mid 19th century atlas maps to depict North Carolina independently. It is more commonly mapped in conjunction with South Carolina. Dated and copyrighted to J. H. Colton, 1855. Published from Colton's 172 William Street Office in New York City. Issued as page no. 25 in volume 1 of the first edition of George Washington Colton's 1855 Atlas of the World.