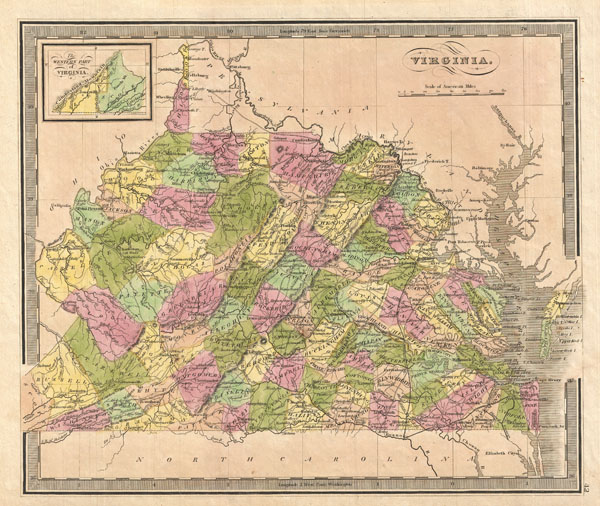 A fine example of J Greenleaf's 1848 map of Virginia. This map covers all of what is today Virginia and West Virginia as well as the entire Chesapeake Bay and adjacent parts of Ohio, Pennsylvania North Carolina and Maryland. Greenleaf's cartographically sophisticated map is based on early work by David Burr and incorporates political and topographical data, naming cities, towns, rail lines, roads, mountains, swamps, and rivers. Color coding at the county Level. An inset in the upper left quadrant details the western part of Virginia which runs off the main map. Issued as plate no. 42 in the 1848 edition of Greenleaf's New Universal Atlas. Though a revision and reissue of Greenleaf's 1842 atlas, this edition is in fact far rarer and is not listed in Phillips.

Greenleaf, J., A New Universal Atlas; Comprising Separate Maps Of all the Principal Empires, Kingdoms & States Throughout the World: and forming a distinct Atlas Of The United States. 1848.