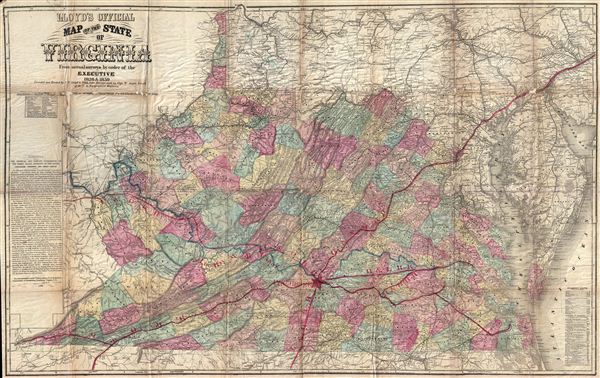 The rarest iteration of this important map - the Lynchburg Edition.

An extremely scarce map, this is the Lynchburg edition of J. T. Lloyd's important map of Virginia – without a doubt the most influential map of Virginia to be issued during the American Civil War. Lloyd's enormous map covers Virginia just prior to the creation of West Virginia later in 1862. Cartographically Lloyd based this map on Herman Boye's seminal large format map of Virginia, of which this is in essence a reduction.

Lloyd's original promotion called this map 'the only real good map ever made in America' and, in fact, its size and detail popularized it as military field map during the American Civil War. The Union Generals Winfield Scott and George B. McClellen to plan strategy and the troop deployment throughout Virginia.

Though first issued in 1861, Lloyd's Virginia was printed in multiple editions until about 1872, with the present example, known as the Lynchburg edition, being the rarest. The Lynchburg edition was printed not by Lloyd, but rather by Wynkoop & Hallenbeck of 113 Fulton Street, New York, to illustrate an 1872 pamphlet promoting British immigration to Lynchburg. This edition differs from earlier states with regard to its inclusion of revised descriptive text on the left hand side of the map which describe the three geographical zones of Virginia: the Tidewater, the Piedmont, and the Great Valley. Another major difference in the Lynchburg edition, from whence it extracts its name, is the stenciled overprinting indicating the various railroads of Virginia focusing on Lynchburg, identified by a large red star, as a regional hub. The use overprinting, though it does designate a different state of map, also suggest that the original plate was not significantly updated for this printing. Several of the overprinted rail lines, including the R & L, the C & O, and the L & D, are indicated only on the overprint as they had not yet been built when this plate was made in 1862. The only notable update to the original plate is on the imprint, which reads 'Published by Wynkoop & Hallenbeck, No. 113 Fulton Street, New York.' Only the Wynkoop and Hallenbeck edition of this map exhibits the Lynchburg overprinting. Outside of major institutional collections, there are but three known examples of the Lynchburg edition.


Wynkoop Hallenbeck Crawford Co. (fl. c. 1895 - 1925) was a large-scale printer and publisher based in New York in the late 19th and early 20th centuries. The firm originated with Matthew Bennet Wynkoop (February 15, 1830 - March 30, 1895) was born in Zanesville, Ohio and died in New York City. He mastered the printing trade in Pittsburg and moved to New York in 1850. He joined forces with John Johnson Hallenbeck (1817 - April 30, 1891) and an unknown 'Thomas' to form 'Wynkoop, Hallenbeck and Thomas'. When Thomas retired, the name was changed to 'Wynkoop and Hallenbeck', with Wynkoop being the senior partner. Wyncoop died in 1895 and shortly thereafter, Crawford joined the firm, which was consequently renamed, Wynkoop Hallenbeck Crawford. When John J. Hallenbeck died, in 1891, and his shares passed to Mr. Harry C. Hallenbeck, then a junior partner, who relocated it to Pearl street and meeting success, opened offices in Albany, New York and Lansing, Wisconsin. By 1902 they were one of the largest printing concerns in the United States. They began bidding on state contracts in 1901, acquiring contracts in Michigan. They also did extensive printing for the railroad and shipping industry. The firm seems not to have published after 1925. Learn More...

Good. This map, like all known examples of the 'Lynchburg edition' exhibits overall toning, some loss, and wear on the to the original fold lines. Example has been repaired on the verso using reversible conservators tapes and glues, however, would benefit from additional professional flattening and repair work, which we leave to the discernment of the buyer.