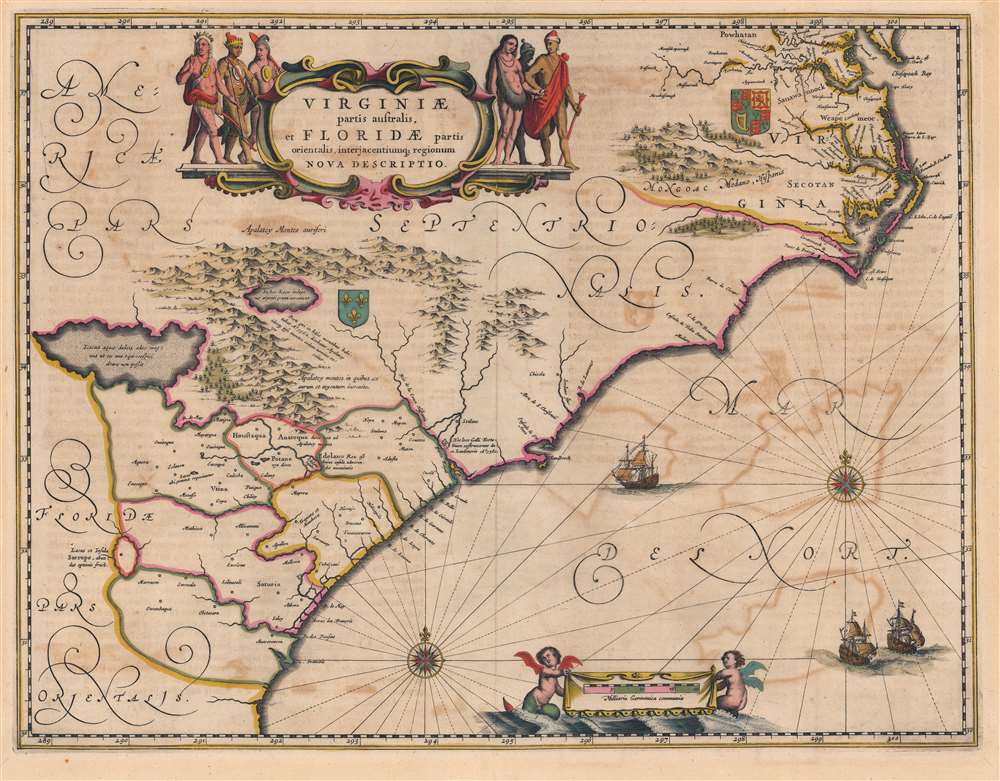 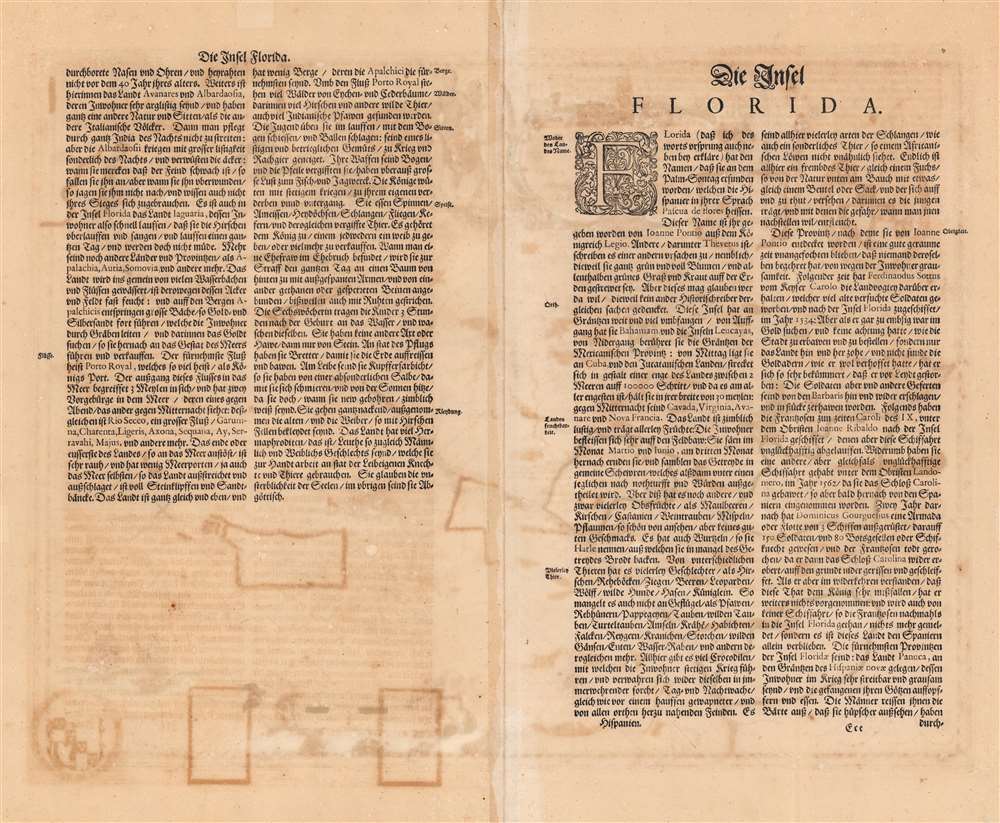 Conflicting French and English claims to the Carolina, Georgia, and Florida seaboard.
$2,500.00

In terms of its scope, the map covers the same region presented in the 1606 Jodocus Hondius Virginia Item et Floridae, but improves greatly in the detail. While the earlier Hondius relied on the geographic models presented in the late 16th century John White and Le Moyne maps, the present map includes the new cartographic data provided in the far superior, c. 1631 charts of Hessel Gerritz - most notably improving the delineation of the Outer Banks of the Carolinas, and the mouth of Chesapeake Bay. While many of the place names still derive from earlier maps, there are important advances. The settlement in 1621 of Newport News appeared on Blaeu's 1638 version of this map for the first time, for example. Areas in the interior still appear to rely heavily the 1591 Le Moyne map - in particular the large Appalachian lake advertising the presence of native-gathered silver.

The contesting claims to this stretch of American coast by the English and French not only appear in this map, but are inherent to the map's earliest precedents. Despite the much-improved coastlines after Gerritz, the core of the map's Virginia/Florida division has its roots in the two De Bry maps of these regions, and these were expressly maps of an English Colony (Virginia) and the French efforts to colonize further south (Florida). Both regions bear coats of arms associating them with the relevant colonizing power. Elements such as the doomed fortress built by Laudonnière in 1562 in French Florida (and destroyed in 1565 by Pedro Menéndez de Avilés) further advertise the map's lineage.

The engraving exhibits a clear and legible style, while not neglecting the decorative elements which characterize the finest maps of the Dutch Golden Age. Mountains and forests are rendered pictorially. The elegant cartouche is flanked by six Native American figures. The English coat of arms is displayed in Virginia, whilst the French arms reflect efforts to colonize Florida in the 1560s. The sea areas are embellished with two fine compass roses, and three sailing ships. A banner displaying the scale in German miles is suspended between a pair of bat-winged, fish-tailed mer-putti.

The publication of this map in the 1639 French issue of the Jansson/ Hondius atlas puts it ever-so-narrowly behind the cartographically virtually identical 1638 map printed by Jansson's primary competitor, Blaeu. The two maps are frequently mistaken for one another, due to the lack of printer's imprint on either. There are nonetheless telltales which identify the Jansson clearly. First, the tribal names 'Powhatan' and 'Secotan' in the region of Virginia lack full stops, the punctuation present in the Blaeu. There is as well an error in the Blaeu not present in his competitor's map: in the lower right of the Blaeu, the sequence of longitude reads '298, 299, 200' whilst the Jansson map has this corrected to '298, 299, 300.'

This map was engraved by Jan Jansson, first appearing in the 1639 French edition of the Nouvel Atlas. Thereafter it appeared in every edition of the Jansson atlases, all in a single state. The present example dates from a c. 1644 German edition of Jansson's Novus Atlas.