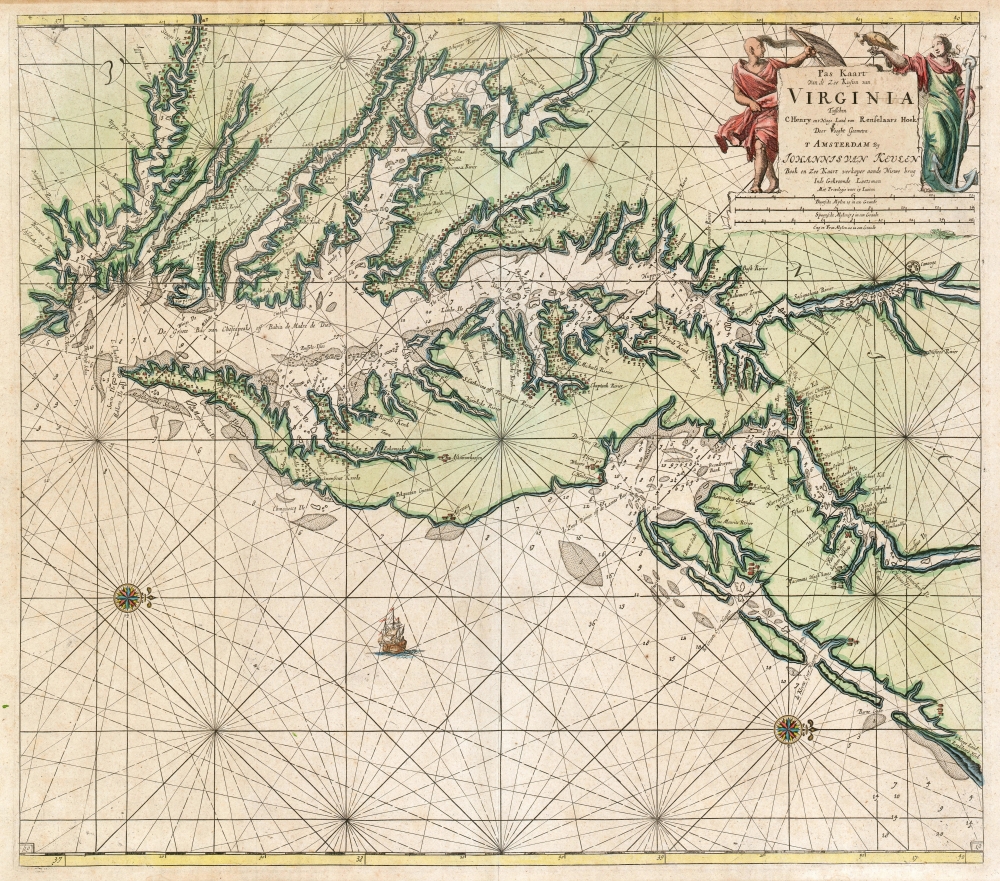 A Beautiful Dutch Chart of Chesapeake Bay and its Surrounds.
$7,000.00

A lovely example of Van Keulen's 1684 nautical chart or maritime map of Chesapeake Bay, Delaware Bay and the adjacent coastline and waterways. Although it does not map beyond the coastline, it nevertheless is one of the first charts to utilize the 1673 Hermann map as a source, making it one of the most up-to-date charts of the region at that time - and a vast improvement on the 1675 Roggeveen, specifically because Van Keulen's chartmaker, Vooght, relied on the English Hermann map rather than Hessel Gerritz's c. 1630 charting as did Roggeveen.

Contributions from an Unknown Source

Vooght also introduced detail to this chart that derive from an unknown source, more recent than the Herrmann. It is one of the first maps to note the existence of Philadelphia (spelled Filadelfy on the chart.) There are numerous depth soundings, which naturally did not derive from the Hermann. The whole mapping of the Delaware also derives from a newer, unknown source - perhaps in this case relying more on contemporaneous Dutch sources, as that area had been a Dutch colony.

Throughout the chart, shallows and rocky areas are noted: Rensselaer's Hook is accompanied with a simple coastal view. The chart is decorative as well, with an attractively rendered ship, two compass roses, rhumb lines and a beautifully engraved cartouche.

Although they are not dated, Van Keulen's charts can generally be assigned associated with years of publication based on typographical changes. First states of the charts from the fourth volume of Keulen's Zee-Fakkel lack page numbers; these are dated 1684. Second states, dated 1687, have a page number added to the lower left corner. The 1695 third state has page numbers in both lower corners: this corresponds to the present example. OCLC only reveals ten copies of this map in institutional collections, in various states. Several examples of the chart have appeared at auction and in dealer's catalogues over the past ten years, although most of these have proved to be of the 1695 edition of the chart or later.