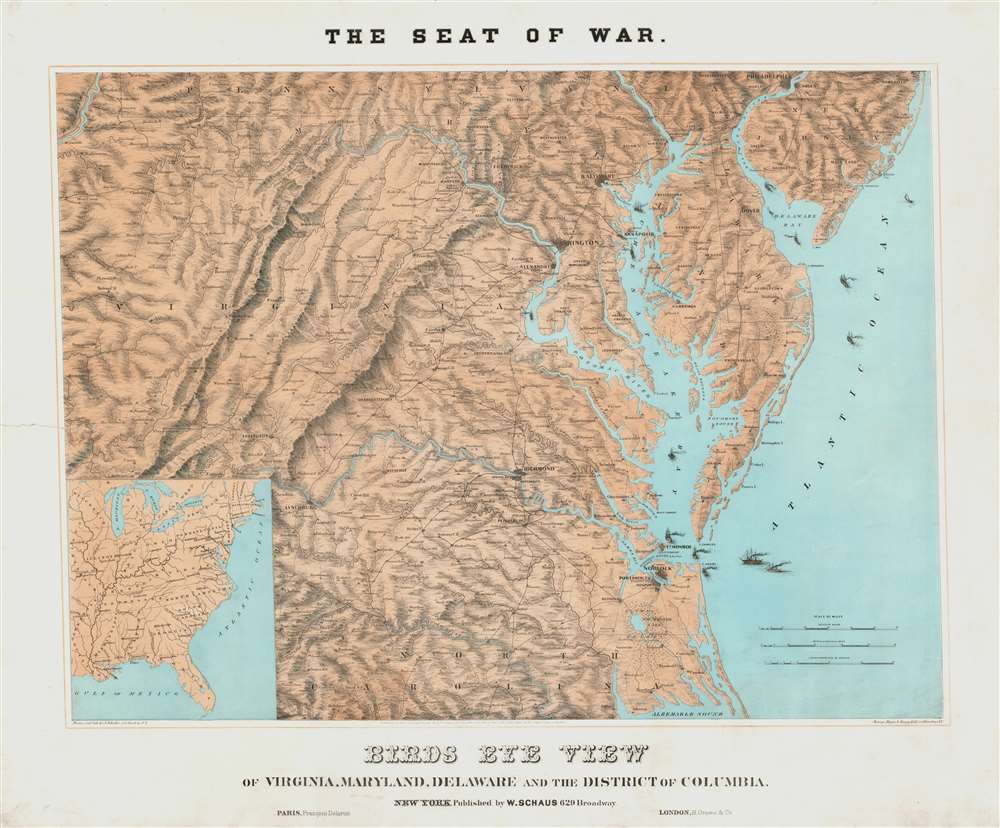 Rare view of the of Seat of the Civil War around Washington D.C. and the Chesapeake Bay.
$3,000.00

A striking 1861 three-color Schedler/Schaus chromolithograph view/map of the Chesapeake Bay region, including Maryland, Virginia, Delaware, and Washington D.C., shortly after the outbreak of the American Civil War (1861 - 1865). Centered on the Chesapeake Bay, the view covers roughly from Gettysburg to Albemarle Sound and from the Ohio River to the Atlantic seaboard. Steam/Sail ships cluster around the mouth of the Chesapeake and Delaware Bays, presumably an attempt to illustrate the ad hoc Union naval blockade of the Confederacy.

It is of note that while this piece is described as a 'Birds Eye View', it is in fact a map. Nonetheless, it is presented as a view: on thick paper, with striking almost three-dimensional topography, rich chromolithograph color, and the stylistic conventions of American viewmaking, including the double border and title in the lower margin. These factors underscore that this map was intended to be sold as art, to be mounted and framed in libraries and fine homes - a sales model entirely in line with Schaus's gallery business

The view was drawn by Joseph Schedler on behalf of William Schaus, at the time New York City's most prominent art dealer. It was engraved and printed by the major New York firm of Sarony, Major and Knapp. International publishing partners, Francois Delarue of Paris and H. Graves of London, stress both Schaus's impressive international backing, and the intention to sell the print abroad, where interest in the American Civil War was running high. The map is scarce on the market, but well represented institutionally.

Joseph Schedler (April 22 1813 - December 12, 1887) was a New York based engraver, printer, lithographer, and globe maker active from about 1850 to at least 1889. Schedler was born in Germany and immigrated to the United States, a Forty-Eighter fleeing the German Revolutions of 1848-1849. He was active from at least 1850 when he partnered with fellow German immigrant, the landscape artist, painter, and engraver, Theodore August Liebler (1830 – 18??), to found the lithography firm of Schedler and Liebler, 129 William Street. The firm completed engraving work for J. H. Colton as early as 1852 but probably dissolved by 1854. Schedler filed a patent in 1878 for a crystallotype machine, a device the employed electrotyping to print textured crystalline surfaces. He is best known today as a globe maker. Joseph Schedler's globes won prizes at the Paris International Exhibition in 1867, the American Institute Fair in 1869 and the Vienna International Exhibition in 1873. From at least 1876 records suggest he relocated to Jersey City, New Jersey. Schedler's son, Herman, was also a globe maker, and inherited his father's business sometime around 1877, producing globes will to about 1901. Learn More...


Carl Wilhelm Friederich Schaus (July 4, 1821 - December, 29 1892), generally known as William Schaus, was a German-American art dealer and print maker active in the middle to late 19th century. He was born in Nassau, Deggendorf, Bayern, Germany. Schaus began his career in Paris with the established 'Goupil, Vibert et Cie.' Around 1857, Schaus was sent to New York to establish an American branch of the French firm as well as to set up an International Art Union to compete with the powerful American Art Union. Schaus, with his considerable experience and support from abroad, was able to lure several important artists away from the American Art Union. This helped him to develop an impressive portfolio of artists and prints. In the early 1860 Schaus split with Goupil Vilbert to establish his own offices at 629 Broadway, in New York City. By the late 1860s he was the most powerful art dealer in New York, they type 'who only met the richest classes' (Democrat and Chronical, January 7, 1893). He was the first to import a genuine Rembrandt, The Gilder to the United States. He also issued a varied corpus of works that included maps, views, art prints, and illustrations. He retired in March of 1892, leaving his business to his son, Hermann Schaus and partner A. W. Conover. His vast personal art collection sold at auction in May of 1892. His daughter, Mabel Schaus (1865 - 1900) was involved in a romantic scandal that rocked New York social life when she eloped with a married man 'Stillman', who ironically died a year later. He died in December of that year. Another of Schaus's sons, William Schaus Jr. (1858 - 1942) was a famous entomologist. Schaus is interred in New York's Greenwood Cemetery. Learn More...

Very good. Some margin soiling. A few minor margin tears. Larger repaired and stabilized tear, from left side, center, extends about 3 inches into map, as far as Lewisburgh.