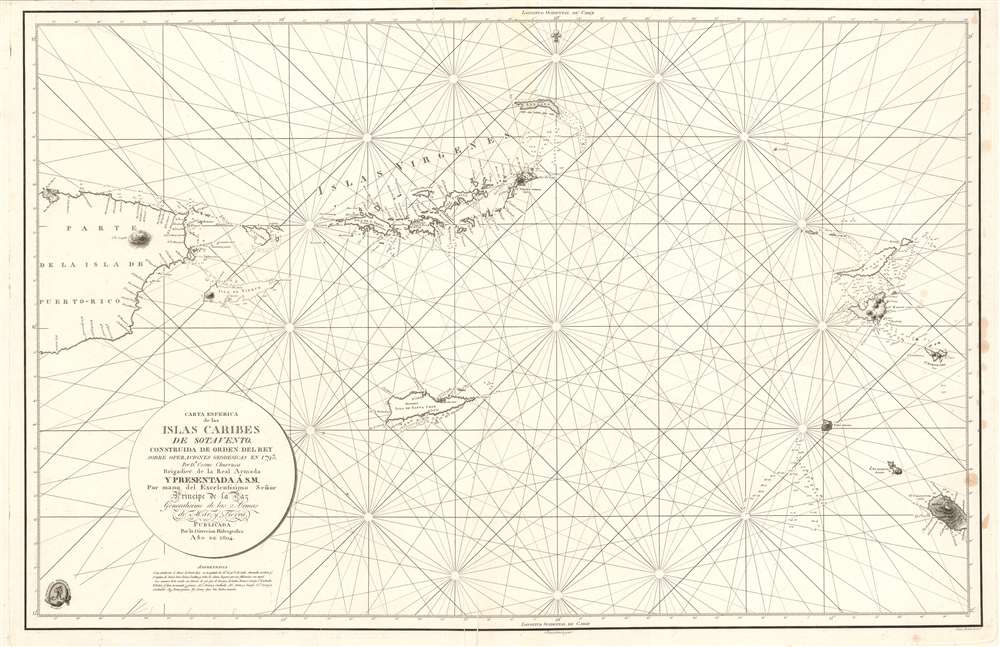 A rare 1804 Direccion Hidrografica nautical chart or maritime map of the Virgin Islands. Centered on Virgin Gorda Island, the map covers from eastern Puerto Rico to St. Christopher and St. Barts. When it was printed, this was the finest map of the Virgin Islands yet produced, the result of a meticulous 1792 survey by Spanish officers Joaquin Francisco Fidalgo and Cosme Damián de Churruca y Elorza.

This map was published by the Direccion Hidrografía in 1804. The map is based upon surveys completed by Spanish naval Brigadier Cosme Damián de Churruca y Elorza. The map was engraved by Fernando Selma, with the lettering added by Juan Morata.


Cosme Damián de Churruca y Elorza (September 27, 1761 - October 21, 1805) was a Spanish-Basque naval officer active in the late 18th and early 19th centuries. Churruca was born in Mutriku, Gipuzkoa, northern Spain. He received his early education at the Seminary of Burgos before taking advanced studies at the School of Bergara. He graduated the Naval Academy of Ferrol in 1778. In 1781 as an Officer in the Spanish Navy, Churruca performed heroically in the siege of Gibralter. Along with Joaquin Francisco Fidalgo led an important 1792 expedition to map Spanish dominions in North American and the Caribbean - resulting in some of the earliest modern hydrographic studies of these regions. He died in the Battle of Trafalgar commanding the ship of the line San Juan Nepomuceno.


Ferdinand Selma (1752 - January 8, 1810) was a Spanish line engraver active in Madrid with the Direccion Hidrografía in the late 18th and early 19th centuries. Selma was born in Valencia and died in Madrid. His is best known for his engravings for his 1788 Illustrations de Relacion del ultimo viage al estracho de Magallanes.