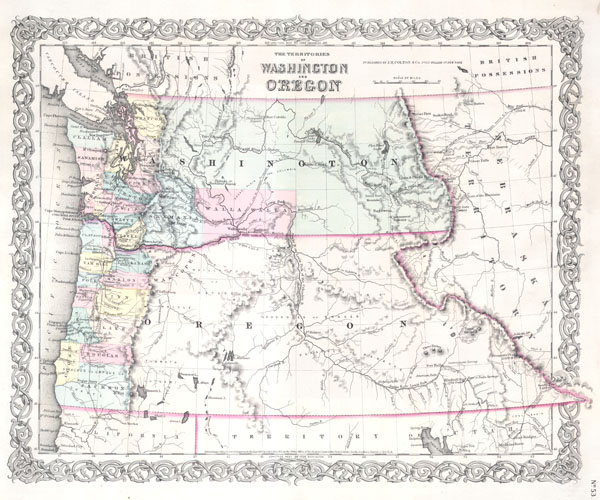 An attractive 1853 Colton Map Washington and Oregon, inclusive of the modern day states of Idaho, Montana & Wyoming. Colton maps of this region exhibit dramatic changes from year to year, indicating actual changes in the expansion and settlement of the area. In this particular map Washington and Oregon extend fully to the Continental Divide where they encounter a Nebraska Territory that extends north all the way to Canada. Of particular interest on this map are the explorers routes including the proposed Stevens route of the Pacific Railroad. Gives considerable attention to Indian tribes, passes, and forts. Dated and copyrighted: 'Entered according to the Act of Congress in the Year of 1853 by J. H. Colton & Co. in the Clerk's Office of the District Court of the United States for the Southern District of New York.' Published from Colton's 172 William Str. Office in New York City.

Fine or perfect condition. Vivid hand color. Blank on verso.
Looking for a high-resolution scan of this?