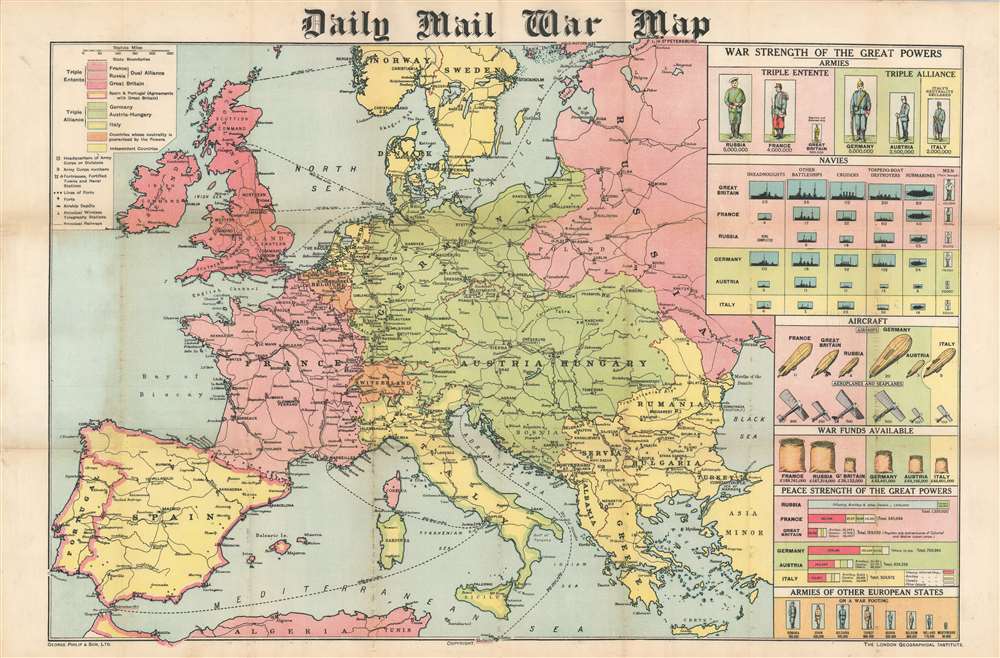 Uses infographics to compare the armies and navies of European countries at the outbreak of World War I.

This is a 1914 George Philip map of Europe at the beginning of World War I. Philip uses colors to illustrate the alliances between the Triple Entente (Great Britain, France, and Russia) and the Triple Alliance (Germany, Austria-Hungary, and Italy). Neutral and independent countries are shaded other colors, although their neutrality did not save them from the onslaught of war in Belgium's case. Major cities are identified across the continent, along with fortresses, airship depots, wireless stations, and railways. Infographics along the right border provide an incredible visual summary of each country's military strength. The infographics create compelling comparisons between the belligerents. The comparison between standing armies, for example, lays bare the shocking difference between the Russian and French armies and the British army. At the same time, the British navy vastly outclasses any of the others in almost every category. Aircraft appear as well, an intriguing prospect in 1914 since airships and airplanes had never before been used in combat.

This map was created by George Philip and Son and published by the Daily Mail in 1914. Ten examples are cataloged in OCLC and are part of institutional collections in the United States and the United Kingdom, including the Osher Map Library at the University of Southern Maine, Texas A and M University, Stanford University, Yale University, Oxford University, and the British Library.