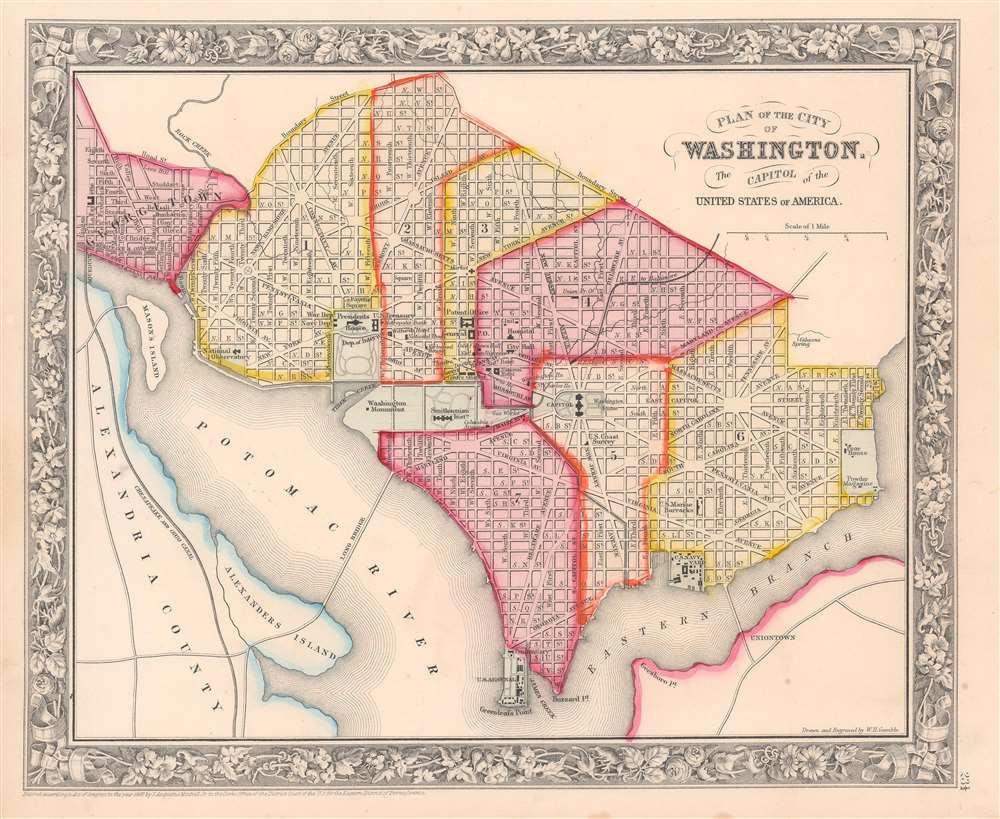 This is an 1860 Samuel Augustus Mitchell, Jr. city plan or map of Washington, D.C. The map depicts the city from Georgetown to the Anacostia River (Eastern Branch) and from Boundary Street to Greenleafs Point and the confluence of the Anacostia and Potomac Rivers. Highly detailed, numerous buildings throughout the city are labeled, including the U.S. Capitol Building, the Smithsonian Institution, the Washington Monument, and the White House. The Navy Department, War Department, and U.S. Treasury are also identified, as are the Patent Office, the General Post Office, the U.S. Navy Yard, and the U.S. Arsenal. Nearly every street in the city is labeled, and Washington D.C.'s iconic street layout is easily recognizable. The Chesapeake and Ohio Canal, which eased river travel along the Potomac, is across the river in Alexandria, Virginia.

This map was prepared by S. A. Mitchell Jr. for inclusion in the 1860 edition of Mitchell's New General Atlas. Like many American map publishers of this period, though, he did update his maps, Mitchell did not update his copyrights, consequently this map is dated and copyrighted to 1860: 'Entered according to Act of Congress in the Year 1860 by S. Augustus Mitchell Jr. in the Clerk's Office of the District Court of the U.S. for the Eastern District of Pennsylvania.' Curiously, the present example bears the page number '23 1/2'. We have been unable to locate any other digitized examples of Mitchell's plan of Washington, D.C. with this page number, suggesting it may have been from a preliminary or transitional edition of the atlas.

Mitchell Jr., S. A., Mitchell's New General Atlas, containing maps of the various countries of the World, plans of cities, etc., c. 1860.     Mitchell's New General Atlas was published by Samuel Augustus Mitchell, Jr., the son of the prolific cartographer Samuel Augustus Mitchell. Many of the plates are derived from the his father's Mitchell's Universal Atlas, but not directly. The Mitchell's Universal Atlas was initially sold to Thomas, Cowperthwait, and Company in 1849, and again to Charles Deliver in 1856. It was Deliver who introduced the new vibrant color scheme, abandoning the older Mitchell's Universal Atlas green borders and themes for bright reds, blues, and yellows. Samuel Augustus Mitchell, Jr. acquired the Deliver plates in 1859. He added his own floral motif border, but doubled down on the vibrant color scheme, thus introducing to the American public the most vividly colored American atlas of the 19th century. In 1860, he published the first edition of his New General Atlas and, despite a slump in sales during the American Civil War, attained a level of success to rival his father. Mitchell would continue to publish the New General Atlas until 1887, when the firm formally closed.