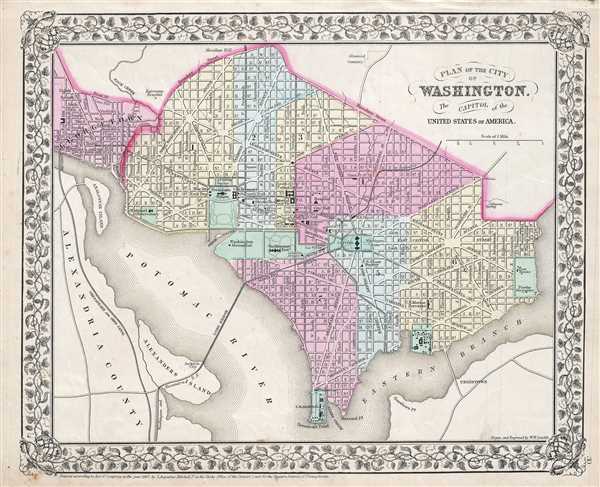 A rare 1867 Map of Washington D.C. by American map publisher S. A. Mitchell Jr. Depicts the city shortly following Lincoln's assassination. Important buildings such as the capitol, the Arsenal, the Smithsonian Institute, the White House, etc. are individually drawn in and labeled. Offers wonderful detail at the street level including references to parks, individual streets, piers, ferries, and important buildings. Colored coded with pastels according to city wards. Includes Georgetown. Based upon the original plan of Washington D. C. developed by French architect Pierre-Charles L'Enfant. Features the vine motif border typical of Mitchell maps from the 1865-80 period. Prepared for inclusion as plate 30 in the 1867 issue of Mitchell's New General Atlas. Dated and copyrighted, 'Entered according to Act of Congress in the Year 1867 by S. Augustus Mitchell Jr. in the Clerk's Office of the District Court of the U.S. for the Eastern District of Pennsylvania.'