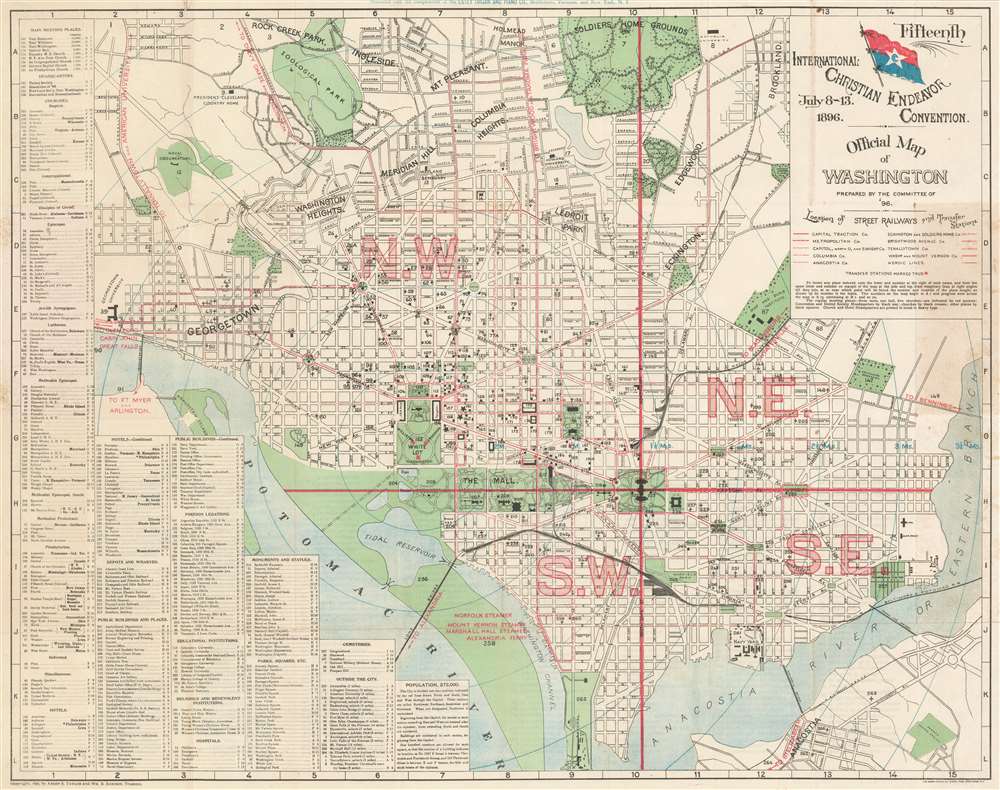 The 15th convention of the Young People's Society of Christian Endeavor.
$250.00

This is an 1896 Young People's Society of Christian Endeavor city plan or map of Washington, D.C. Published for the Fifteenth International Christian Endeavor Convention, over 260 locations in Washington, D.C. and Anacostia are numerically identified and correspond to a detailed index situated along the map's right border. The meeting places for the convention, three of which were 10,000 person tents erected by Christian Endeavor, appear at the top of the index and are followed by churches (divided by denomination), hotels, public buildings (which include museums and government buildings), foreign legations, educational institutions, monuments, and parks. Large black lettering highlights the National Mall and the White Lot, which is known as The Ellipse today. The three large tents, called Williston, Endeavor, and Washington, are marked by large red dots. Major railways and transfer stations are illustrated in red and differentiated by a coding schema. This key is situated just below the title in the upper right.

The Young People's Society for the Christian Endeavor, founded in 1881 in Portland, Maine, is a nondenominational Christian evangelical society. Begun by Francis Edward Clark, a reverend from Portland, the society's stated objective is 'to promote an earnest Christian life among its members, to increase their mutual acquaintanceship, and to make them more useful in the service of God'. The movement has since spread worldwide and held the 29th C.E. World Conference in Flensunger Hof, Germany in July 2019.

This map was created by the Norris Peters Company of Washington, D.C., copyrighted by Anson S. Taylor and William B. Robison, and published by the Committee of '96 in 1896. Five examples are catalogued in the OCLC and are part of the institutional collections at the Harvard College Library, the Library of Congress, George Washington University, the University of Virginia, and the University of Michigan.

Norris Peters (c. 1834 – July 15, 1889) was a Washington D.C. based photo-lithographer active in the late 18th and early 19th century whom Scientific American called 'one of Washington's most eccentric and mysterious figures.' Peters was born and educated in Pennsylvania. He relocated as a young man to Washington D.C. where he took work as an examiner for the United States Patent Office. During his work with the patent office he became fascinated with the emergent process of photolithography. In 1869 Peters secured substantial venture capital of about 100,000 USD from an unknown investor and founded The Norris Peters Company at 458 Pennsylvania Avenue. Their printing offices have been described as 'unequaled in this or any other country.' From these office Peters pioneered development of American photo-lithography. For nearly a generation he held a near monopoly on government photo-lithographic printing. Among their more notable contracts included numerous maps for congressional reports, maps of the U.S. Coast Survey, maps of the U.S. Geological Survey, Mexican currency for the State of Chihuahua, and the Official Gazette of the Patent Office. Peters also maintained an interesting social life and was a confidant to many of the most powerful figures in congress. He was also a bon vivant known for being an excellent cook and hosting lavish dinners the invitations to which were 'never declined'. Despite being socially active he never married and died a confirmed bachelor. Following Peters' death in 1889 his business was taken over by Henry Van Arsdale Parsell who administered it until his own death in 1901. The company then merged with Webb & Borcorselski, another D.C. lithography firm, and was renamed Webb & Borcorselski-Norris Peters. They continued to publish under this name well into the mid 20th century.

Good. Laid down on archival tissue. Exhibits some toning where previously attached to binder and along original fold lines. Exhibits minor areas of infill at some fold intersections. Blank on verso.