1912 Foster and Reynolds Map or Plan of Washington D.C. 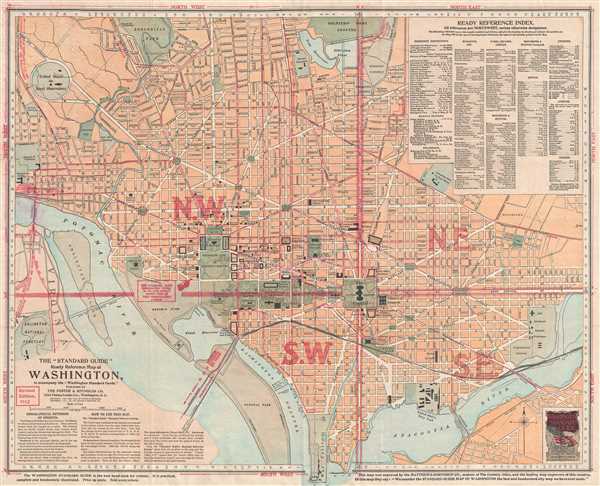 1912 Foster and Reynolds Map or Plan of Washington D.C.

A vibrantly colored map of the Capital of the United States.

This is an appealing 1912 map or plan of Washington D.C. by the Foster and Reynolds Company of Washington. It covers Washington D.C. from the Arlington National Cemetery eastward as far as 28th Street and the Congressional Cemetery and from the Soldiers' Home Ground to the Anacostia River and the War College (southern tip of Washington D.C.). The map is exceptionally detailed, noting important buildings, monuments, streets, parks, railroads and an assortment of other topographical details. The city is divided in four sections marked N.W., S.W., S.E. and N.E. by red rays emanating from the Capitol Building. A 'Ready Reference Index' is set in the upper right quadrant. Two short paragraphs in the lower left quadrant detail the geographical divisions of streets and a note on how to use this map. This map was first copyrighted in 1901 and went through numerous subsequent editions. This 1912 edition contains revisions in red.

The map was engraved by the Matthew-Northrup Co., makers of the Century Atlas, and was published by the Foster and Reynolds Company, Washington D. C.

Very good. Backed on archival tissue for stability. Revisions in red ink in upper-left quadrant exhibit some running. Blank on verso.
Looking for a high-resolution scan of this?