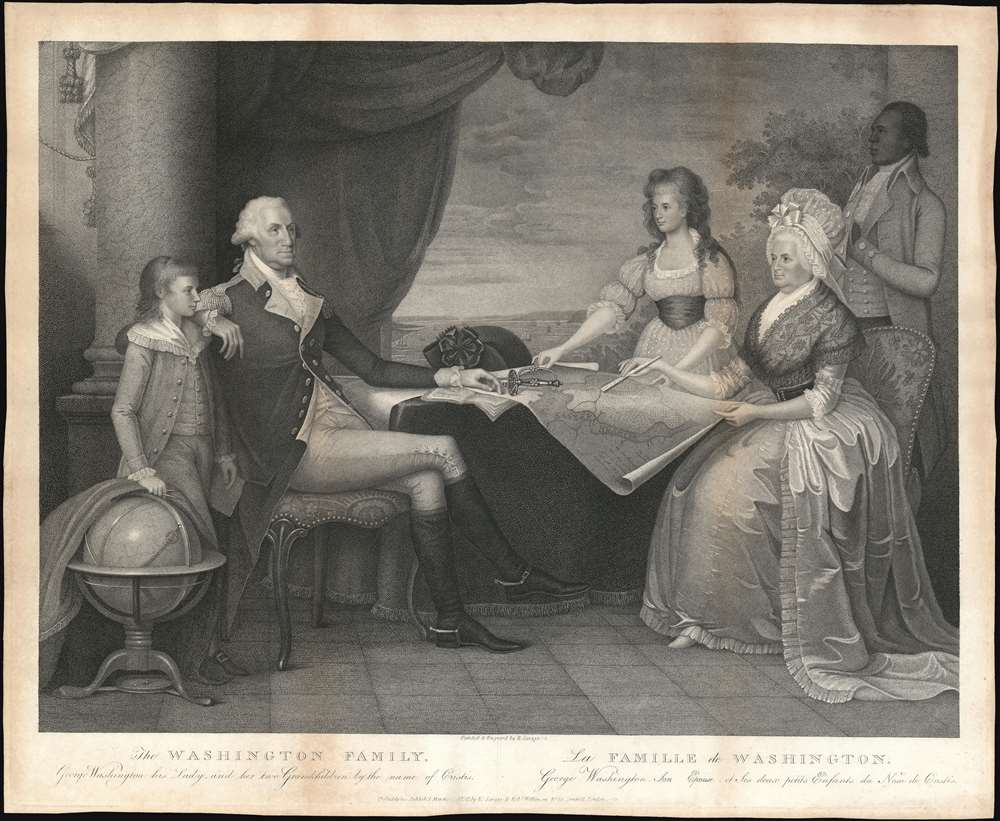 An iconic image of George Washington and his family - issued during his lifetime!
$5,000.00

Breaking Down the Image

The image consists of five figures, George and Martha Washington, their grandson George Washington (Washy) Parke Custis, their granddaughter Eleanor (Nelly) Parke Custis, and Washington's African American wartime manservant Billy Lee. Washington appears in his military uniform. His famous tricorn hat rests on the table next to him. Washington gazes off into the distance, presumably contemplating weighty matters. His left hand rests on Andrew Ellicott's 1792 map of Washington D.C. (Thackara and Vallance), the new federal city currently under construction. His right hand is on the shoulder of his grandson, 'Washy,' a symbol of the future. Across the table Martha Washington looks towards George. She is wearing a conservative open-front silk gown with white fichu, a black lace shawl, and a tall beribboned bonnet. Martha points to the map with a closed fan in her right hand while she holds it open with her left. Washington's young grandson, 'Washy,' stands to his right. He rests a hand on the globe, perhaps meant to suggest that the then fledgling United States, in the next generation, might rise to global prominence. Eleanor (Nelly) Parke Custis, Washington's granddaughter, with her (red) hair in curls, is dressed in a white empire-waisted gown with elbow-length, puffed sleeves. She stands behind Martha Washington and helps hold down the map. In the rear, at far right, is Washington's African American manservant. There is some debate regarding exactly who this is, but the general consensus is that he represents Billy Lee, who served Washington during the American Revolutionary War. The background offers a view of the Potomac River from the George Washington estate of Mount Vernon.

Edward Savage's work with the Washington family began in 1789, when the president of Harvard College commissioned him to paint a portrait of George Washington. In in the following hear, 1790, at the request of John Adams, Savage completed a similar portrait of Martha Washington. At the same time, Savage completed studies of Washington's grandchildren, 'Washy' and 'Nelly'. Billy Lee, the African American manservant in the background, Savage did not likely do a study of, reflected in the indistinct and comparatively poorly painted image appearing in the 1796 painting. Billy Lee takes on greater definition in this engraving, potentially reflecting further studies on the part of Savage between 1796 and this print's issue in 1798. Savage spent about 6 years compiling the existing images into a large painting, which he completed in 1796. At the same time, he was working with Wilkinson to complete the engraving and printed image. It is likely that the engraved image was completed, at least as regards the central figures, sometime before the painting itself was completed.

On March 3, 1798, an advertisement appeared in The Philadelphia Gazette announcing the sale of a new engraving of George Washington and his family:

The print, representing General Washington and his Family, all whole lengths in one groupe, will be ready for delivery by the 15th of March. An unfinished impression is to be seen at Mr. McElwee’s Looking Glass store No. 70, South Fourth Street. The subscription will close on the 10th of March inst.

A few months later, on June 3rd, the engraving was completed, and Savage wrote in a letter to Washington,

Agreeable to Col. Biddle’s order I delivered four of the best impressions of your Family Print. They are choose [sic] out of the first that was printed. … The likenesses of the young people are not much like what they are at present. The Copper-plate was begun and half finished from the likenesses which I painted in New York in the year 1789. I could not make the alterations in the copper to make it like the painting which I finished in Philadelphia in the year 1796. The portraits of yourself and Mrs. Washington are generally thought to be likenesses. As soon as I got one of the prints ready to be seen I advertised in two of the papers that a subscription would be open for about twenty days. Within that time, there was 331 subscribers to the print and about 100 had subscribed previously, all of them the most respectable people in the city. There is every probability at present of its producing me at least $10,000 in one twelve month. As soon as I have one printed in colours I shall take the liberty to send it to Mrs. Washington for her acceptance. I think she will like it better than a plain print. Mrs. Savage joins me in respectful compliments to Mrs. Washington.

Although it is unclear if Savage gained the monetary success he hoped this print would bring, it's dissemination, as well as Savage's tour of the painting, elevated him as an artist in the public eye.

This view was prepared and engraved by the artist Edward Savage. The painting on which this is based was completed in 1796 and now hangs in the National Gallery of Art (1940.1.2) This engraved image was printed in partnership with the London publisher Robert Wilkinson in 1798. There appears to be only a single edition.

Examples are scarce on the market but can be found in several venerable American institutions, most of which likely owned examples from the original subscription. Savage's correspondence with Washington suggest that at least 500 of the prints were issued to satisfy subscriber interest. Reduced examples of this important print were issued by various publishers well into the mid-19th century, but the present example is the large format first issue.

Edward Savage (November 26, 1761 - July 6, 1817) was an American Federal Period painter and engraver best known for his seminal portraits of George Washington and his family. Savage was born in Princeton, Massachusetts. Savage apprenticed as goldsmith, where he was able to master engraving. As a painter, he appears to have been initially self-taught, but nonetheless attained some degree of technical mastery before studying under London-based American painter Benjamin West in 1791. He is best known for his important 1789 - 1790 painting of George Washington, which is today the most iconic image of America's first president. From 1792 to 1795 he owned portrait gallery in New York, but nonetheless preserved a close relationship with Washington, with whom he corresponded, and painted images not just of Martha, but also of his grandchildren. His master work is probably the group portrait 'The Washington Family', which shows George along with his family and manservant at Mount Vernon and which now hangs at the National Gallery. Savage gained considerable prominence through his association with the Washington family. Savage is credited with nearly 100 portraits and several landscapes. He is often criticized as a painter, but the historical importance of his work cannot be questioned. Learn More...


Robert Wilkinson (fl. c. 1758 - 1825) was a London based map and atlas publisher active in the late 18th and early 19th centuries. Most of Wilkinson's maps were derived from the earlier work of John Bowles, one of the preeminent English map publishers of the 18th century. Wilkinson's acquired the Bowles map plate library following that cartographer's death in 1779. Wilkinson updated and retooled the Bowles plates over several years until, in 1794, he issued his first fully original atlas, The General Atlas of the World. This popular atlas was profitably reissued in numerous editions until about 1825 when Wilkinson died. In the course of his nearly 45 years in the map and print trade, Wilkinson issued also published numerous independently issued large format wall, case, and folding maps. Wilkinson's core cartographic corpus includes Bowen and Kitchin's Large English Atlas (1785), Speer's West Indies (1796), Atlas Classica (1797), and the General Atlas of the World (1794, 1802, and 1809), as well as independent issue maps of New Holland (1820), and North America ( 1823). Wilkinson's offices were based at no. 58 Cornhill, London form 1792 to 1816, following which he relocated to 125 Frenchurch Street, also in London, where he remained until 1823. Following his 1825 death, Wilkinson's business and map plates were acquired by William Darton, an innovative map publisher who reissued the General Atlas with his own imprint well into the 19th century. Learn More...