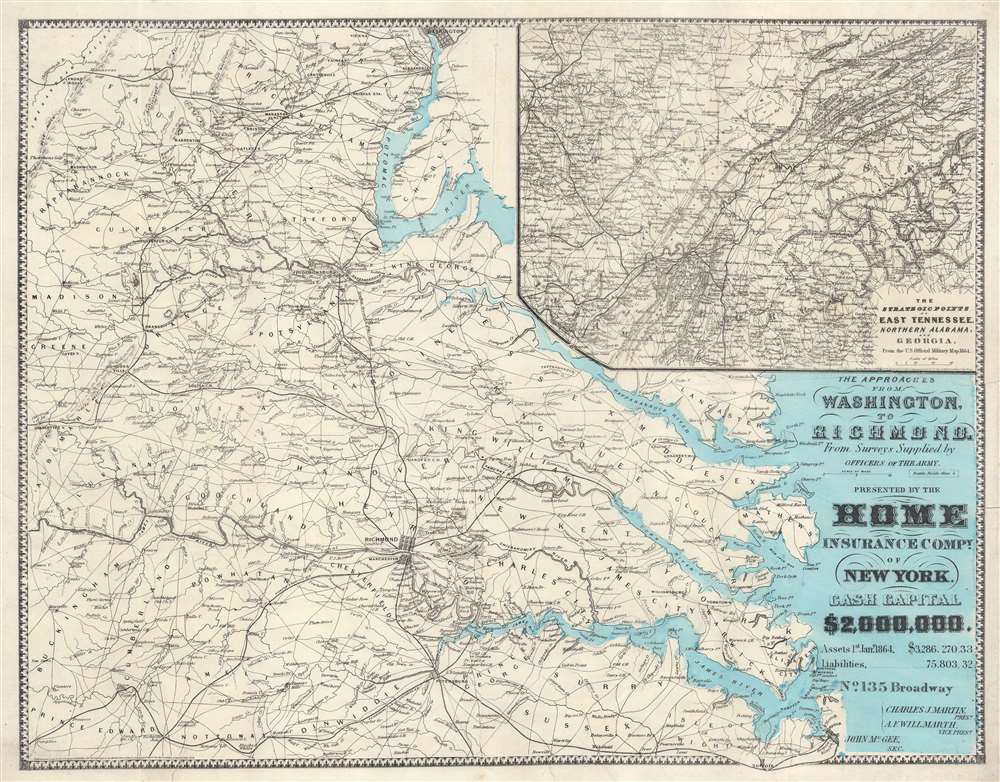 A scarce 1864 Daniel A. Heald map of the Washington D.C. / Richmond, Virginia area during the American Civil War.  The strategically and politically critical corridor between Washington D. C. and Richmond, Virginia was one of the most hotly contested theaters of the American Civil War (1861 - 1865).  When this map was issued, in 1864, the war had already turned strongly in favor of the Union. Late 1864 and early 1865 witnessed a succession of battles as Union forces pursued Confederate armies as they retreated toward their capital, Richmond.  Battle sites are marked by crossed cavalry swords.  The main map relates to the 1862 Peninsular Campaign.  While the submap follows military operations in Eastern Tennessee, Northern Alabama, and Georgia - representing the final days of the Confederacy.

The Home Insurance Company (HIC) was founded in 1853 by a collective of New York merchants headed by Simeon Loomis (1767 - 1865).  At the time, merchants could not find a reliable insurer for their properties and goods.  The firm began with an initial cash infusion of $500,000 USD.  By 1863, they were one of the largest fire insurance companies in the United States.  Despite setbacks during the American Civil War, the HIC continued to increase its customer base, premiums, and capital reserve, increasing its capital reserve from $500,000 to $1,000,000 by 1863.  By 1864, they increased it again, to $2,000,000.  HIC developed a reputation for prompt payment and strategically expanded nationally while avoiding litigation through settling. Despite several large city-wide fires in Portland, Maine, Vicksburg, Mississippi, and Glens Falls, New York, the company continued to prosper.  Disaster struck in 1871, when the Great Chicago Fire consumed more than $200 million in property. The HIC was able to raise additional capital to pay the claims, but the Great Chicago Fire transformed the national fire insurance industry - prompting leaders to promote fire-proof construction, city-wide fire protection, and general risk management.  The proactive measures instituted at HIC contributed to the development of the modern insurance industry.  In February 1991, Home Insurance was purchased by TVH Acquisition Corporation, an investor group whose principal partners include Trugg-Hansa Holding AB - Sweden’s second-largest insurer - and Industrial Mutual Insurance - Finland’s second-largest insurer. The firm remains active under this umbrella company.

This map was published in 1864 by Daniel Addison Heald to promote the Home Insurance Company. The present map is the 2nd edition, following the 1862 first edition, published to promote the company's raising of $2 million cash capital. This map is scarce.  We note several examples held institutionally, but only 2 examples on the market in the last 20 years.

Daniel Addison Heald (May 4, 1818 - December 28,1900) was an American insurance agent and adjuster active in the second half of the 19th century.  Heald was born in Chester, Vermont. He studied at the Kimball Union Academy, becoming a Vermont lawyer in 1843.  From 1846 to 1854, he worked as a cashier at the Proctorsville Bank.  He ran for the Vermont House of Representatives and was elected in 1850.  In 1854 he was elected to the Vermont Senate.  During this entire time, he was also the Vermont agent for the Home Insurance Company.  He was offered the position of general manager in 1856, which he accepted and relocated to New York.   By 1888, he became president of the, by then, extremely large and profitable insurance concern.  He was the chief organizer of the National Board of Underwriters. He died of a heart attack at just 41.  He was survived by his wife, Sarah e. Washburn, two daughters, and a son, John Oxenbridge Heald. Learn More...