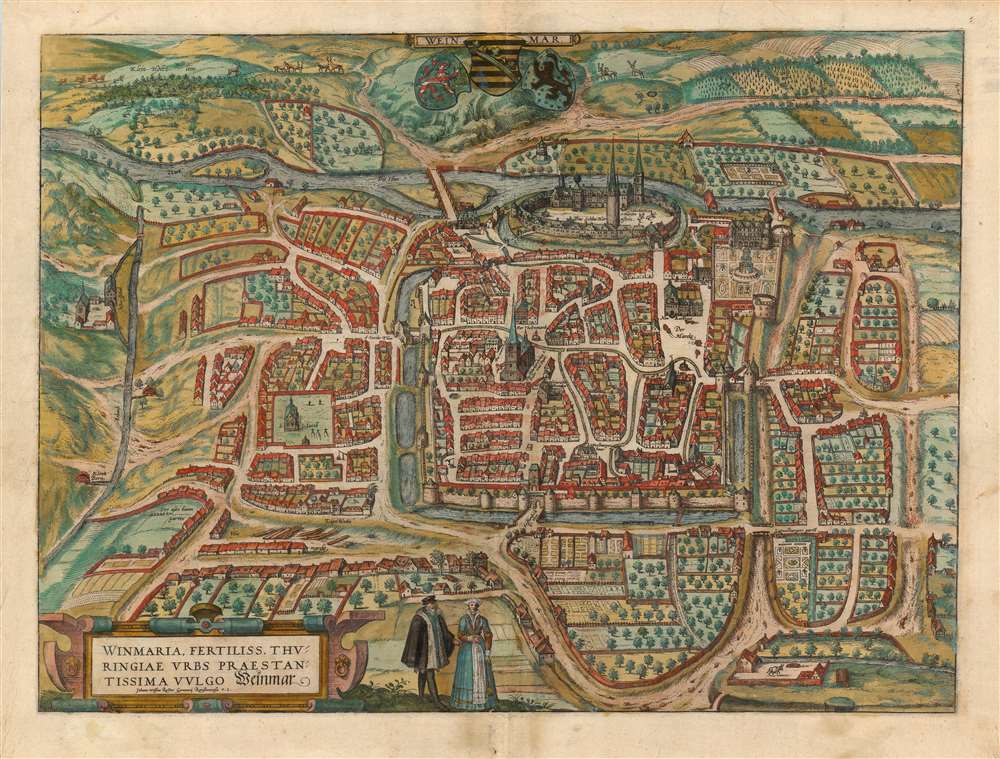 Evocative plan of the medieval city of Weimar.
$500.00

This is a superb original color example of Braun and Hogenberg's city map / view of Weimar. While not the first view of the city published in the Civitates Orbis Terrarum, in 1582 it was the first to command a full sheet. The 1574 edition of the Civitates included a view of the city which shared a sheet with Jena, Erfurt, Gotha, and Fulda. As was the case with many of the views that were similarly clustered, Braun and Hogenberg would later dedicate this full sheet to the plan.

Braun and Hogenberg, like their contemporary publisher Ortelius, sourced their views and plans as much as possible from scholars who could provide drawings and descriptions from first-hand experience, generally crediting them on the sheet itself or in its associated text. The present work was derived from information provided by Johann Wolf, also known as Wolfius. On the plan, he is credited as 'Rector of the Regensburg Gymnasium' (a secondary school comparable to an English grammar or American preparatory school.) He would later become rector of the gymnasium in Weimar itself, as well as a local mayor. Regensburg and Weimar are separated by 266 kilometers, a nontrivial distance in the 16th century, so it is tempting to speculate that Wolfius' associations with Weimar somehow predate his becoming rector in Regensburg and that his later positions represented a return to a town with which he was clearly familiar.

The plan is oriented to the east, placing the walled and moat-surrounded city amongst rolling fields and meadows on the west bank of the River Ilm. Although the plan is not presented as a perspective view, the buildings are shown in partial profile, thus giving the impression of a bird's eye view of the city - as well as showcasing some of the city's architectural treasures. On the river at the upper center of the image is the Ducal seat, Hornstein Castle (with its own moat and walls). To the south of the castle stands the palace of Duke Johann Wilhelm, of Saxe-Weimar - now the site of the Herzogin Anna Amalia Bibliothek. The structure shown here, amongst its formal gardens is the so-called 'Green Castle,' built between 1562 and 1566 by architect Nikolaus Gromann. The Gothic church of Saints Peter and Paul commands the center of the view - across the street to the north of the church is shown 'Die newe schule,' possibly the same where Wolfius would in time become rector. Other palaces, gardens and towers are named throughout the plan. As is usually the case with Braun and Hogenberg's views, in the foreground a well-dressed couple display the styles of the city, while at the top center the arms of Saxony are displayed with the striped lion of Thuringia and the arms of the Margraviate of Meissen.

This engraving was first included in the third volume of Braun and Hogenberg's Civitates Orbis Terrarum in 1581 or 1582 and remained in the work until its last print run of 1617. We see ten examples of the separate plan cataloged in institutional collections.


Johann Wolf or Wolfius (1524 - 1602) was a German school rector - first in Regensburg, and later rector of the grammar school in Weimar and local mayor. He was the father of Michael Wolf, a mathematician, physicist, logician and metaphysicist. His sole cartographic output appears to have been the town plan of Weimar drawn for Braun and Hogenberg's Civitates Orbis Terrarum, which appeared in that work in 1582. Learn More...

Braun, G. and Hogenberg, F., Civitates Orbis Terrarum, (Antwerp) 1582.     The Civitatus Orbis Terrarum is an 6-volume atlas of cities, or town book, compiled and written by George Braun, Canon of Cologne Cathedral and Franz Hogenberg. Braun and Hogenberg gathered together vast amounts of information and draft plans to produce over 500 city views/maps published in six parts between 1572 and 1617. Most of the town views and plans were engraved by Simon van den Neuvel (Novellanus) and Frans Hogenberg, many after drawings by Joris Hoefnagel. The Civitatus Orbis Terrarum was printed in Cologne, but in the Flemish style after Abraham Ortelius, the preeminent cartographer of the period. The text throughout is the work of Braun. The work proved to be a great success, reflecting the period's greater fascination with notable metropolises than with national boundaries. After the initial publication of volume 1, the popularity of the led to a second volume. In the introduction to volume 2, Braun requests that those who live in cities not represented, sent details of their own metropolises. This led to the publication of volumes 3, 4, and 5. Volume 6, the last, did not appear until 1617 under Franz Hogenberg's son, Abraham Hogenberg. The volumes include New editions Civitatus Orbis Terrarum continued to be released until roughly 1640. In general, the plates and text remained unchanged.