1849 Meyer Map of the World on Mercator's Projection 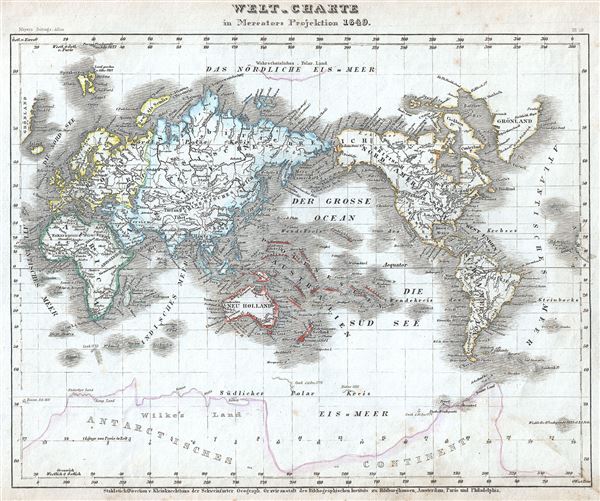 1849 Meyer Map of the World on Mercator's Projection

This is an excellent example of the 1849 map of the world on Mercator's projection by Joseph Meyer. Meyer offers a fascinating snapshot of the world during a period of rapid globalization and discovery. This map depicts the entire world centered on Australia. It notes currents, icebergs and the discoveries of various polar explorers along with dates. Much of Australia and central Africa is unmapped. An enormous Antarctic continent is shown only embryonically, representing the relatively primitive state of Antarctic exploration at the time. This map also identifies various cities, towns, rivers, mountains and an assortment of additional topographical details.

This map was issued as plate no. 10 in Meyer's Zeitung Atlas. Although all the maps in this atlas are not individually dated, the title page and maps were often updated while the imprint with the date was not, causing confusion to the exact date for some of the maps. Moreover some maps in the atlas were taped in at a later date as an update to the atlas. We have dated the maps in this collection to the best of our ability.

Very good. Minor spotting at places, especially over right margin. Blank on verso.
Looking for a high-resolution scan of this?