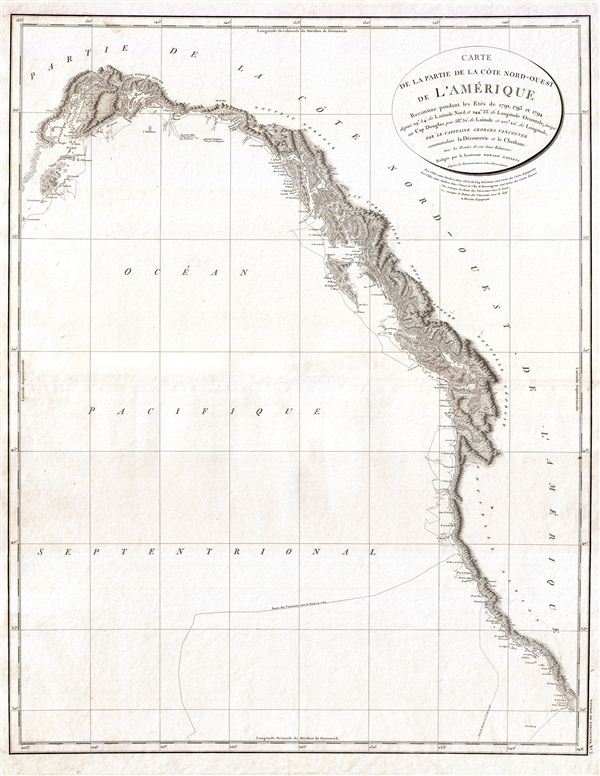 One of the great navigator George Vancouver's most important and influential maps, this is the 1799 general reconnaissance of the west coast of America from San Diego to Kodiak Island, Alaska. At last the west coast of America, particular the Pacific Northwest, appears on the map much as it is in reality. This beautifully engraved map features a number of notable firsts, including the first published mapping of the Puget Sound, the first mapping of Vancouver as an Island, the first mapping of the Johnston Strait, and the first published map of the Columbia River. Vancouver's mapping of the Columbia River, which he initially missed, was of crucial importance to the development of the western fur trade. Just five years after this map was published, Lewis and Clark would consult this map when planning their own important overland expedition to American's west coast. The subsequent opening of the west to the fur trade heightened British and American rivalries in the region as well as ushered in the Great Age of the Mountain Men. Mount Rainier, Mt. St. Helene, Mount Baker are all noted, Baker being named after one of Vancouver's Lieutenants. San Francisco Harbor is noted as 'Port Sd. Francisco.' Slightly further north, Drake's Harbor appears. Here Sir Frances Drake supposed wintered in 1579 and in the process claimed the American northwest, as New Albion, for England. Vancouver's tracks in 1792, 1793, and 1794 are noted. The amazing detail of this chart, the finest mapping of the American west coast to appear for nearly 90 years after its publication, is an extraordinary monument to Vancouver's meticulous nature.