1853 U.S. Coast Survey Map of the West Coast of the United States 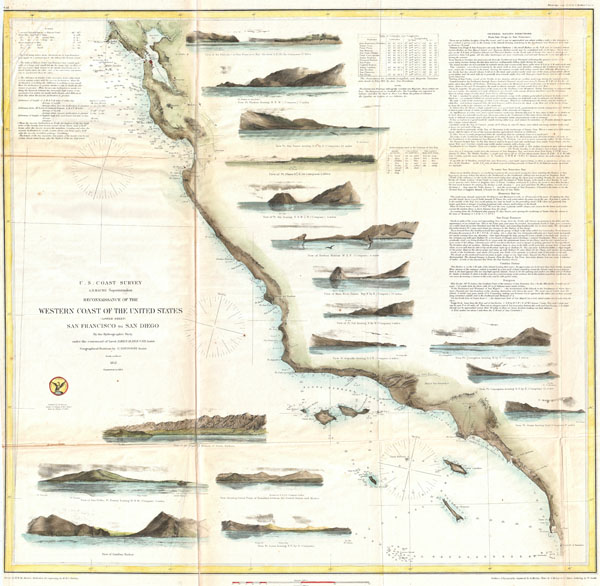 1853 U.S. Coast Survey Map of the West Coast of the United States

One of the most attractive and desirable of the original U.S. Coast Survey charts of the California Coast. Covers from San Diego and the Mexican border north as far north as Pt. Reyes and the San Francisco Bay. Details San Diego Bay, 'El Peublo de Los Angeles' and the Los Angeles Valley, the Mission of San Fernando and the San Fernando Valley, and the San Francisco Bay area including San Francisco itself, Oakland, San Jose, Union City and Alviso. By far this map's most dramatic quality its inclusion of seventeen stunning coastal views including 'View of the Entrance to San Francisco Bay,' 'View Pt. Piedras,' 'View Pt. Ano Nuevo,' 'View of Pt. Pinos,' 'View of Pt. Sur,' 'View of Piedras Blancas,' 'View of Moro Rock,' 'Esteros Bay,' 'View of Pt. Sal,' ' View Pt. Arguila,' 'View Pt. Concepcion bearing W. by S.,' 'View of Pt. Concepcion bearing S.E. by E.,' 'View Pt. Duma,' 'View of the Town and Mission of Santa Barbara,' 'View of San Pedro, Pt. Fermin,' 'View showing initial point of boundary between the United States and Mexico,' 'View of Catalina Harbor,' and a 'View Pt. Loma.' Also offers numerous depth soundings along the coastline and between major islands and undersea dangers. Copious notes and sailing instructions in the upper right hand quadrant of the map are an interesting read for the nautically inclined:

Vessels in sight of the coast and approaching San Diego from the North, will observe an opening in the hills, and the appearance of an inland bay. This is the False Port, and must be avoided…

The hydrographic work for this important chart was completed by James Alden. The Geographical positioning was accomplished by G. Davidson. Prepared and under the supervision of A. D. Bache, one of the most important and influential superintendents of the U.S. Coast Survey in the 19th century.

Report of the Superintendant of the U.S. Coast Survey, (1864 edition).