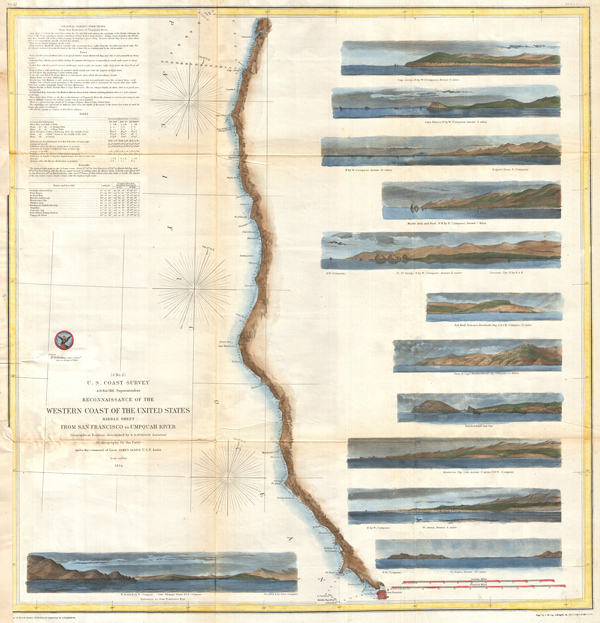 A remarkable 1854 map by the United States Coast Survey. Covers the coastline of California and Oregon from San Francisco (depicted) northwards as far as the Umpqua (Umpquah) River. Offers soundings only along the coast line - suggesting the primitive state of the survey in this region. The highlight of this map are the twelve stunning coastal profile views that decorate the right hand side of the map. The upper left quadrant offers general information on tides and lighthouses as well as detailed sailing instructions for the region. This chart is the central sheet of a series of three charts that the Coast Survey issues to show its progress in the region. The positioning for this chart is the world of G. Davidson. The Hydrography was completed by a party under the command of James Alden. Published under the direction of A.D. Bache, one of the most influential superintendents to lead the U.S. Coast Survey.

Report of the Superintendant of the United States Coast Survey, Washington, (1854 edition).

Very good. Left margin extended. Minor wear and toning along original fold lines - especially at intersections. A few minor verso repairs and reinforcements along folds.
Looking for a high-resolution scan of this?