1852 Cruchley Map of the Western Hemisphere 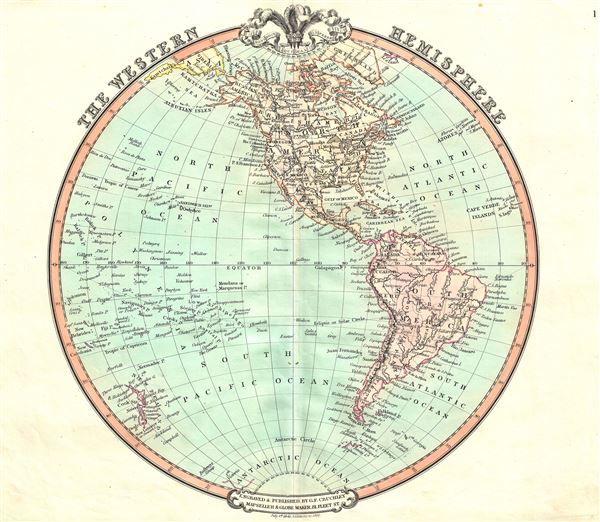 1852 Cruchley Map of the Western Hemisphere

A beautiful 1852 George Frederick Cruchley map of the Western Hemisphere. It offers a fascinating snapshot of the world during a period of rapid globalization and discovery, and includes North America, South America and most of Polynesia. Antarctica is only tenuously denoted, reflecting the primitive state of exploration in the region. The map is color coded according to continents with countries, major cities, rivers, mountains and other topographical features noted. Relief is shown by hachures.

The 1850s were a period of both great hope and simmering tensions in the United States. With the end of the Mexican American War and the signing of the 1848 Treaty of Guadalupe Hidalgo, the United States acquired vast new territories.  The discovery of gold in California in 1849 initiated and mass trans-continental emigration in the quest for wealth and land.  California was admitted as the 31st state in September of this year and the cities of Los Angeles and San Francisco were incorporated. Meanwhile, tensions continued to rise between the slave holding agrarian southern states and the industrialized 'free' northern states.  The Compromise of 1850, intended to placate the slave holding states, essentially divided the United States along lines that, by 1861, would degenerate in the American Civil War.