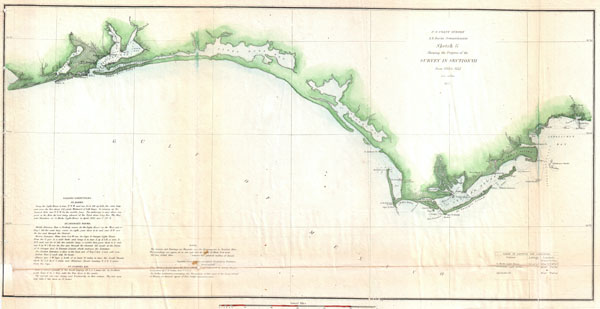 An uncommon U.S. Coast Survey map of the Florida Panhandle. Details from Perdido Bay eastwards past Pensacola Bay and Santa Rosa Bay to St. Andrews Bay, St. Georges Sound and Appalachee Bay. Names numerous points, lighthouses, and towns (including Pensacola) the coastline. Prepared under the supervision of A.D. Bache, for inclusion in the 1852 edition of the Report of the Superintendant of the U.S. Coast Survey.

Good condition. Minor toning and verso repairs along original fold lines. Margin extended along left side. Blank on verso.
Looking for a high-resolution scan of this?