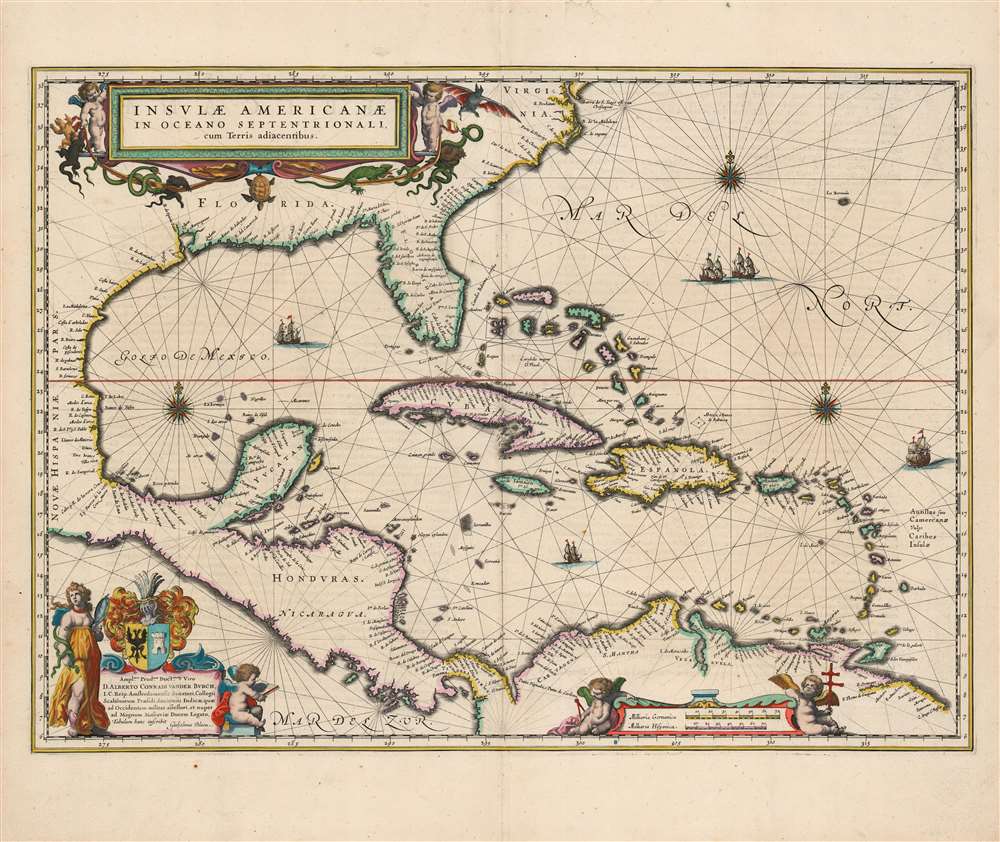 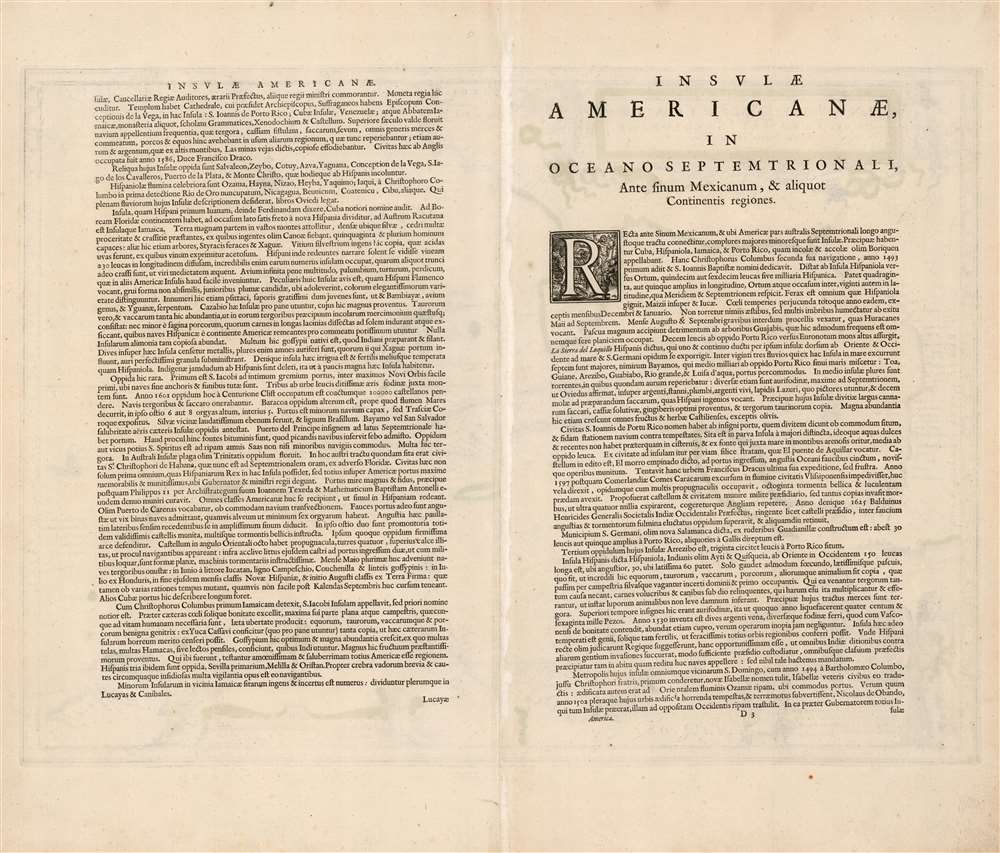 This is a beautiful 1635 example of Willem Blaeu's 1634 map of the Caribbean Islands and the adjacent coastlines of North and South America: this was the first Latin edition of the map to appear in the Blaeu atlas. Both geographically and aesthetically, this map set the standard for the mapping of this region: more than a dozen maps of the region produced later in the 17th century would copy this map, some to the extent of reproducing the title. Blaeu based this work both on his own West Indische Paskaert and Hessel Gerritsz' unacquirably rare and unassailably authoritative De Eylanden Ende Vastelanden Van Westindien op de Noordzee of 1631. The map thus reflects those geographers' commanding knowledge of the Caribbean and the Gulf Coast.

While Blaeu's atlases were certainly not intended for use at sea, the sources for this map were nautical charts intended for navigators sailing for the Dutch West India Company. The geographical detail of the chart reflects its sources in that the interior of its landmasses is left empty: nautical charts were not concerned with matter beyond the coastlines they depicted. The decorative features of the map also emphasize the map's 'chartiness:' the water areas are marked out with rhumb lines, three fine compass roses, and five well-engraved sailing ships.

In addition to its nautical features, the map is embellished with three lovely cartouches. In the lower right, the scale cartouche is flanked with putti playing with navigational tools; in the upper left, the title cartouche's two putti are accompanied by snakes, a turtle, a bat, and an alarming number of iguanas. The dedicatory to Albert Conrad van der Burch (Dutch senator, soldier and diplomat) is surmounted by the dedicatee's arms; to its right, a putto sits reading: to the left, an allegorical female representation of the virtue of Prudence (marked by her snakes, and her mirror) stands; since her face is that of a young woman, the aspect of Prudence invoked here is foresight, and the wise pursuit of long-term goals. Whether this is an actual aspect of the dedicatee's personality, one which the author wished to instill in him, or one with which Blaeu is flattering his dedicatee, is lost to posterity.

This map was engraved by Blaeu for first inclusion in the 1634 German edition of the Blaeu Novus Atlas.; the present example corresponds to the 1635 Latin text edition noted in van der Krogt. This map remained in editions of the Novus Atlas and the Atlas Maior throughout the Blaeu family's publication history; consequently separate examples of this map are well represented in institutional collections, and the map appears on the market from time to time in varied condition. Examples of this quality are becoming difficult to find, however.

Blaeu, J. and W., Atlas Novus, (Amsterdam: Blaeu), 1635.     The classic Dutch atlas, whose publication ushered in the Dutch golden age of cartography. Willem Jansz Blaeu had been, since 1604, producing engraved maps for sale; these were separate issues (and all consequently extremely rare) until the publishing of Blaeu's Appendix in 1630 and 1631, which also included a number of maps purchased from the widow of Jodocus Hondius, (for example his famous iteration of John Smith's map of Virginia.) In 1634, he announced his intention to produce a new world atlas in two volumes, entitled Theatrum Orbis Terrarum, sive Atlas Novus (in an effort to invoke the successful work of the same title produced by Ortelius the previous century, while reinforcing the notion of it being a new work.) This work was published first in German in 1634, followed by Latin, Dutch and French editions in 1635. Blaeu's maps have always been noted for the quality of their paper, engraving and fine coloring, and this was the intent from the very start. The 1634 announcement of the upcoming work described it: 'All editions on very fine paper, completely renewed with newly engraved copperplates and new, comprehensive descriptions.' (van der Krogt, p,43) Many of the most beautiful and desirable maps available to the modern collector were printed and bound in Blaeu's atlases. Willem's son, Joan, would go on to add further volumes to the Atlas Novus, concurrently printing new editions of the first two volumes with additional maps, in effect making these new editions an entirely new book. Under Joan there would be nine Latin editions, twelve French, at least seven Dutch, and two German. This exceedingly successful work would be the mainstay of the Blaeu firm until 1661, at which point the work was supplanted by Joan Blaeu's masterwork Atlas Maior in 1662.