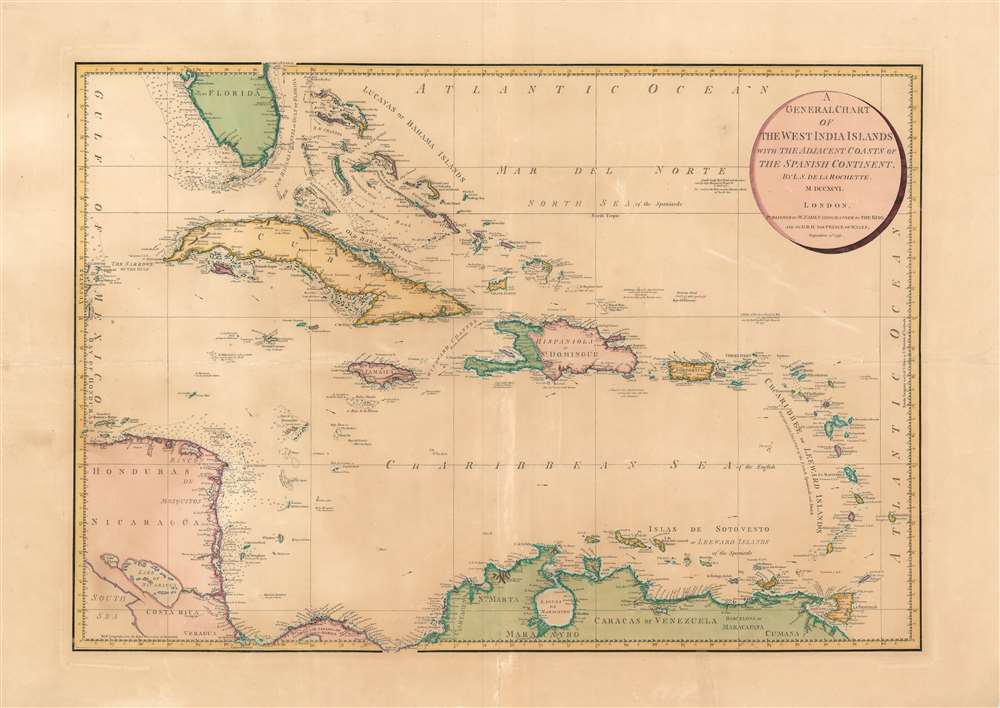 This elegant, large map is William Faden's 1796 map of the West Indies, drawn by the British mapmaker Louis Stanislaw de la Rochette (Delarochette.) Delarochette was the preeminent cartographer working for the prolific map publisher Faden at the end of the 18th century, and this map was among the finest available, and certainly the largest English folio map to focus specifically on the West India Islands during this period. Properly speaking it is a chart, with no detail inland but an abundant and precise treatment of the coastlines. Its scope extends from Rattan or Roatán island off the coast of Honduras in the west, to include Barbados in the east; the map encompasses Trinidad in the south and Tampa Bay in the north.

Referencing the Work of Others

Unlike many cartographers of the period, Delarochette takes pains to note his sources. Notations applied to the chart indicate Delarochette's studious comparison of current navigators' charts with older works, some by prominent mapmakers. For example, he notes that on the approach to Costa Rica, there can be found a 'Baho de la Madalena on some charts.' Between the Mosquito Coast and Grand Cayman are shallows and a possible island marked 'La Misteriosa according to Bellin seen by Capt. Jos. Maud May 21, 1757.' At the mouth of the Old Bahama Channel is marked 'Cayo Verde according to the Spaniards'. Due north of the Virgin Islands and due east of the Bahamas, a sandbank is described as 'seen by Capt. Mourand of Nantes 6 April 1773... this must be the Bela and the Staminco Bank of Van Keulen.' Throughout the map, not only the islands but the bodies of water themselves are noted as the possessions of European colonial powers: the Caribbean Sea is called the sea 'of the English;' The Windward Islands are 'of the French Spaniards and Dutch' and the Leeward Islands and the Mar del Norte - that is to say, the Atlantic - are named 'Spanish waters'. Florida and her waters, though the map denies it, were at the time Spanish territory.

This map was separately issued and is scarce. It is cataloged only in two institutional collections, the British Library, and the University of Florida. Examples did occasionally appear in composite atlases, and an example appears in at least one example of Faden 1811 General Atlas (see Rumsey).


Louis Stanislaw d'Arcy Delarochette (1731 - 1802) was a British cartographer and engraver active in London, England in the late 18th century. Delarochette produced numerous maps in conjunction with various other contemporary British cartographers including Faden, Jefferys, Laurie and Whittle, Arrowsmith, and Bowles. Delarochette is perhaps best known for his monumental eight sheet map of South America, which was used to settle numerous border disputes throughout the continent. He also produced an influential map of the Cape of Good Hope, a fine map of the West Indies, and worked with Sayer and Kitchin on their A new map of North America wherein the British Dominions in the continent of North America, and on the islands of the West Indies, are carefully laid down from all the surveys, hitherto made... Learn More...

Very good condition. Even toning. Some areas of scuffing. Mended splits along folds with minimal impact on printed image.