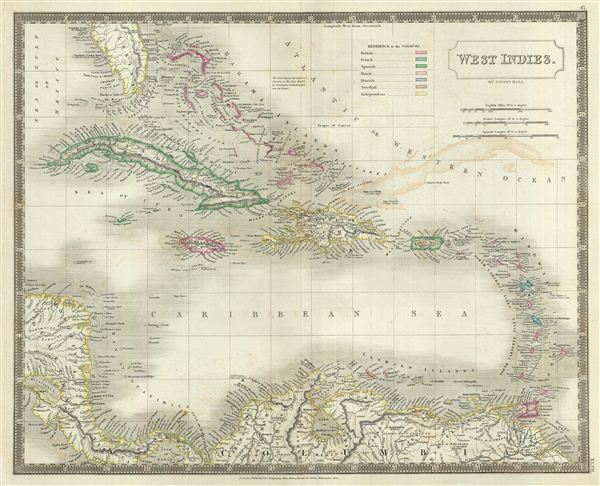 This is a beautiful map of the West Indies from Sidney Hall's extremely scarce 1835 New General Atlas. Centered on the island of Hispaniola (Santo Domingo), it covers the Caribbean from southern Florida, south as far as the Gulf of Panama and the Spanish Main, and east to Barbados and the Lesser Antilles. The Bahamas (Bahama Islands), parts of Honduras, the Panama Bay, Guatemala and Nicaragua are also included. The map identifies the Island of Guanhani or Cat Island, in the Bahamas where 'Colon or Columbus first landed 12 Oct, 1492.' This map also marks the famous battle between Admiral John Benbow and the French buccaneer Jean du Casse during the Action of 1702, where Benbow's captains refused to support his actions allowing du Casse to escape. Benbow later imprisoned the mutinous captains. His actions contributed to his notoriety and several references in popular culture followed. Most famous among them can be found in Robert Louis Stevenson's Treasure Island. Hall also identifies the site off the southern shore of Santo Domingo where Sir John Duckworth defeated the remainder of the French fleet following the Battle of Trafalgar in 1806.