1864 Johnson Map of the West Indies and Caribbean 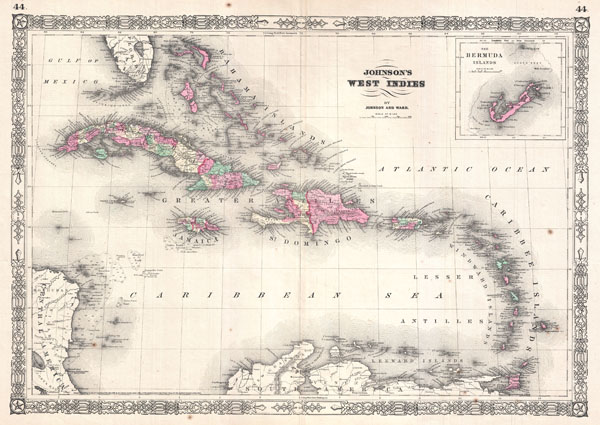 1864 Johnson Map of the West Indies and Caribbean

A beautiful first edition example of A. J. Johnson's highly decorative 1864 map of the West Indies. The map covers from Florida to Venezuela and from Honduras to Barbados. Includes the Bahamas, Cuba, Jamaica, Santo Domingo (Hispaniola), Porto Rico, and the Lesser Antilles or Windward Isles. An inset of Bermuda appears in the upper right quadrant. This map also features some offshore detail with depth soundings in the Pedro Bank off Jamaica, off the coast of Nicaragua, and in the Bahama Bank. Larger islands feature color coding according to district. Throughout, Johnson identifies various cities, towns, rivers and assortment of additional topographical details. Features the fretwork style border common to Johnson's atlas work from 1864 to 1869.

Johnson introduced this map in the 1864 edition of his Atlas. Uncertain of where to place it, he situated it between Florida (43) and his Louisiana, Mississippi, and Arkansas map (45). In an unusual move, he paginated both halves of the map as '44,' an unusual move for Johnson who had already established the convention of identifying double page maps with two page numbers, i.e. 44-45. In later editions of his atlas, started in 1865, he corrected the pagination and moved the West Indies map to the Central and South America section of his atlas.