1866 Mitchell Map of Mexico and the West Indies 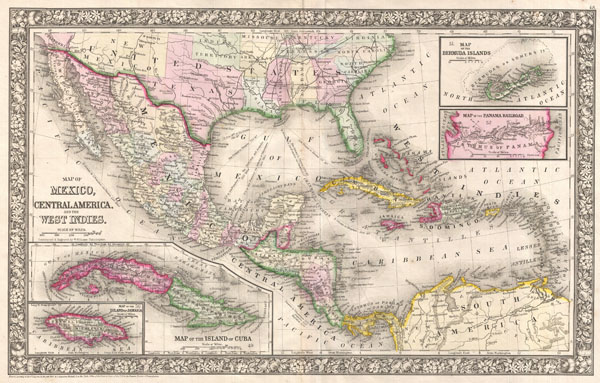 1866 Mitchell Map of Mexico and the West Indies

A fine example of Mitchell's 1866 map of Mexico, Central America, and the West Indies. Centered on New Orleans, this map covers all of Mexico, the West Indies, the Gulf of Mexico, the Caribbean Sea, the Greater and Lesser Antilles, the northern parts of South America, and the southern parts of the United States including all of Texas and Florida. The whole is color coded at the state and province level. This map notes important nautical routes from New Orleans to various popular destinations including, San Francisco, Tampico, the Rio Grande, Veracruz, Panama, and Havana. Features the floral border typical of Mitchell maps issued between 1860 and 1865. Features four inset maps. The two maps in the lower left quadrant depict the Island of Jamaica and the Island of Cuba. The two maps in the upper right quadrant feature the Bermuda Islands and the Isthmus of Panama (Panama Railroad). It is interesting to note that this map was not updated from the original 1860 issue to reflect the partitioning of New Mexico and Arizona in 1864. Mitchell may have used the left over printings of the 1860 issue of this map to populate his atlases until the late-1860s when he finally updated the plate. All in all, one of the most attractive American atlas maps of the world to appear in the mid-19th century. Prepared by S. A. Mitchell for inclusion as plate nos. 48-52 in the 1866 issue of Mitchell's New General Atlas. Dated and copyrighted, 'Entered according to Act of Congress in the Year 1860 by S. A. Mitchell Jr. in the Clerk's Office of the District Court of the U.S. for the Eastern District of Pennsylvania.'