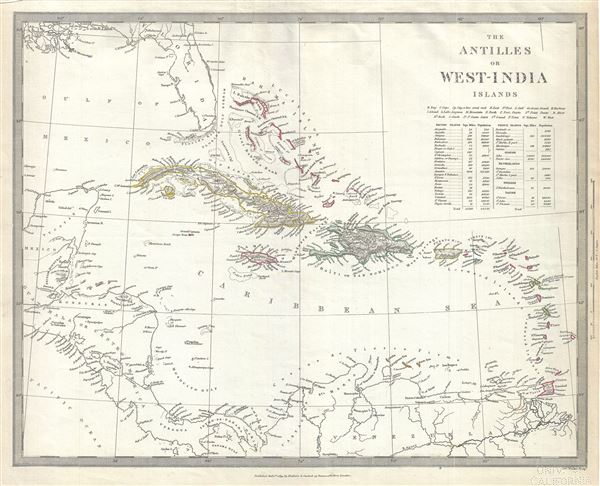 This is a beautiful 1835 map of the West Indies and Caribbean by the Society for the Diffusion of Useful Knowledge or S.D.U.K. It covers from Florida to the Spanish Main and from Guatemala to the Lesser Antilles and Trinidad. It notes British, French, Spanish, Dutch, Swedish and Danish possessions. Towns, rivers, mountains and various other important topographical details are noted. Relief is shown by hachure with some undersea features, such as the Cay Sal, the Florida Reef, and the Great Bahama Bank identified. The Bahamas (Bahama Islands), parts of Honduras, the Panama Bay, Guatemala and Nicaragua are also included.

This map was originally published by Baldwin and Cradock and copyrighted in 1835, but was issued in Volume two of Chapman and Hall's 1844 edition of Maps of the Society for the Diffusion of Useful Knowledge. It was engraved by John Walker of J. and C. Walker.