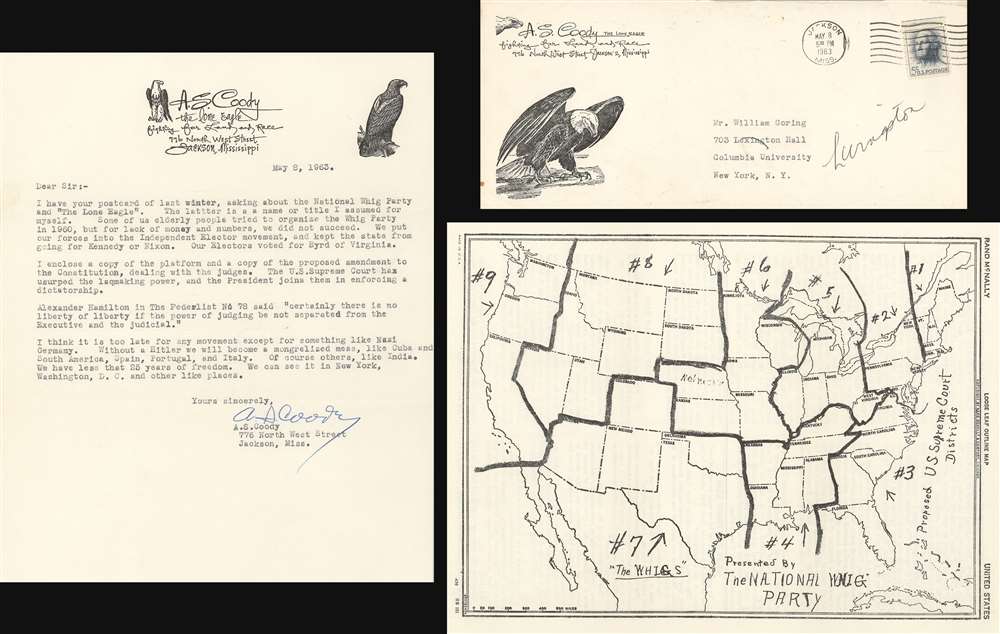 This is a 1963 map of the United States illustrating the National Whig Party's proposed districts for electing judges to the U.S. Supreme Court. Distributed by A.S. Coody, the map is accompanied by a letter from Coody to a correspondent, the original envelope, and a copy of the platform (pro tem) of the National Whig Party 'The Party of Our Fathers', which refers to itself as 'a grassroots party'.

A highly racist organization, the platform states that its purpose is to 'preserve the Constitution, save the Republic and the white race.' The platform continues,

COMMUNISM IS THE ENEMY, working covertly and constantly through hundreds of agencies, usually called 'Fronts', sustained by Mulattoes, anti-Christians and allied groups, including many 'one-world' intellectuals, and a few negroes'.

This disgusting and abhorrent language effectively summarizes the goals of this 'grassroots party', along with its stated aims of getting the U.S. out of the UN, the UN out of the U.S. and 'America First, Not Last'. We have been unable to trace any history of the National Whig Party as it existed in the 1960s in Mississippi, apart from some of the writings of A.S. Coody himself.

While this blatant racism, with an added anti-Semitism for good measure, disgusts all of us here at Geographicus, we believe that these are important historical documents and that they provide a different viewpoint on an incredibly turbulent era in American history. The late 1950s and early 1960s saw the energizing of the Civil Rights Movement, and these documents provide a window into a little-known group of people from the South that were organized against this much-needed movement toward political and social change. Moreover, as historians we believe in learning from the past, not ignoring it. With today's divided political envirnoment, and the rise of global nationalim, which in the United States we recognize a shocking resonance with the Trumpian 'America First' platform, we believe that remembering and learning from the mistakes of the past is more important than ever.

Archibald Stinson Coody IV (December 27, 1883 - February 20, 1969) was an American pharmacist and politician. Born near Phoenix, Mississippi, Coody attended Atlanta Pharmacy College and received a Ph. G. in 1905. He was the president of the Mississippi State Pharmaceutical Association from 1907 - 1908 and from 1918- 1932 he held the position of secretary. He served as mayor of Lucedale, Mississippi in 1915 and then went on to serve as secretary of the Mississippi State Tax Commission from 1918 - 1940. He also held the position of secretary of the Mississippi Capitol Commission from 1916 - 1918. He edited the Osyka Herald in 1912 and The Issue, a newspaper published by former Mississippi Senator and Governor James K. Vardaman, in 1918. He published The Race Question from the White Chief, a Story of the Life and Times of James K. Vardaman. Coody was also a prolific contributor to the Clarion-Ledger, the daily newspaper in Jackson, Mississippi, that was founded in 1837. He used the Clarion-Ledger, mainly through letters to the editor, as a platform to promulgate the odious political opinions of the 'National Whig Party'. The Whig party of the 1960s appears to bear absolutely no resemblance to the party of the same name founded in 2007. Due to Coody's 'prestigious' career, people in Jackson were more than inclined to listen to what he had to say. Coody married Delia Vaught on November 15, 1911, with whom he had two children.

This map was created by Archibald Stinson Coody using a photocopy of a Rand McNally map of the United States. We have been unable to trace any other documents relating to A. S. Coody and the National Whig Party from the 1960s.

Very good. Even overall toning. Light wear along original fold lines. Text on verso.
Looking for a high-resolution scan of this?