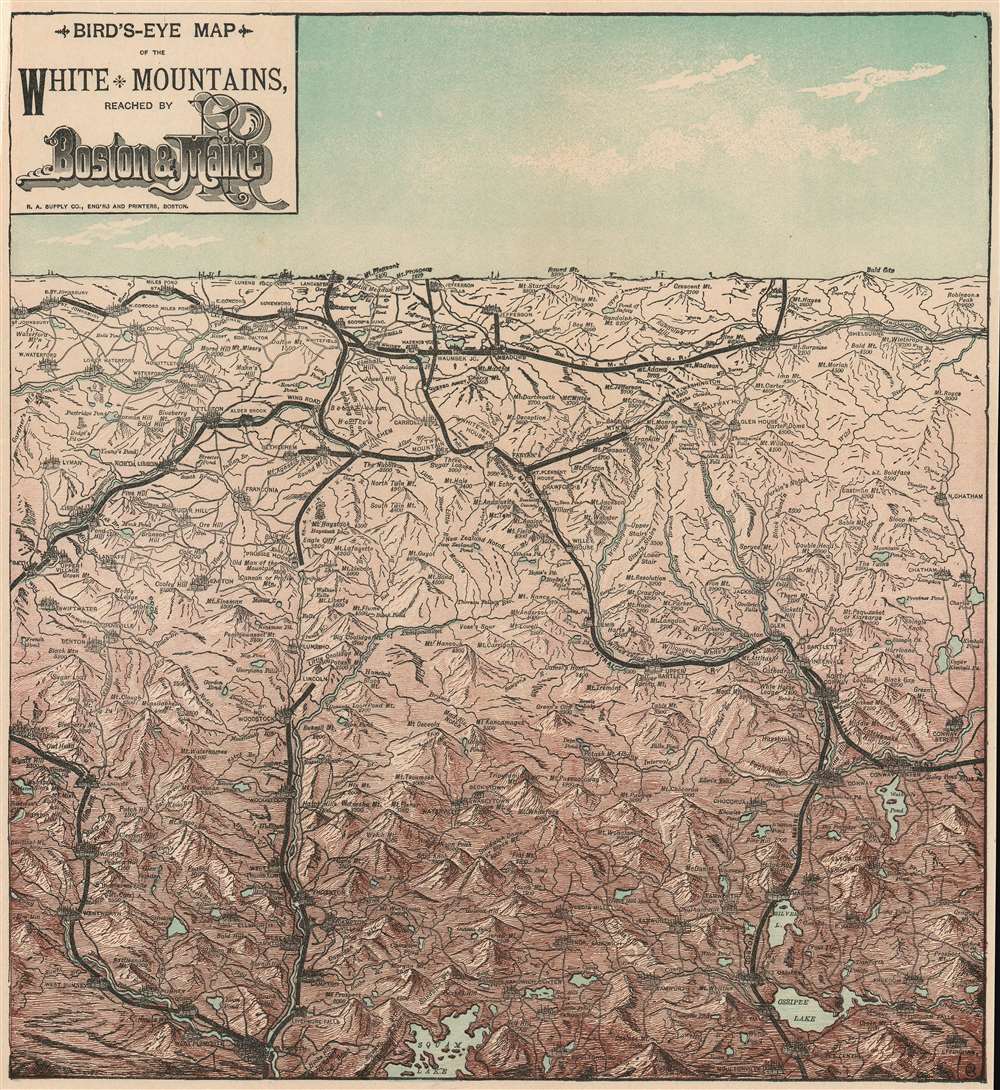 A bird's-eye view of the White Mountains advertising rail service in the region.

This is an 1896 Boston and Maine Railroad bird's eye view map of the White Mountains promoting their service in the area to tourists. The view depicts the region from St. Johnsbury and East Haverhill to Shelburne, Chatham, and Conway Center and from Lancaster and Jefferson Mills to Plymouth and Squam Lake. Beautifully engraved, every mountain in the region is labeled and its elevation is given. Railroad routes in the region, including those of the Boston and Maine Railroad and the Maine Central Railroad, are illustrated by thick black lines.

Commonly known as the 'B and M', the Boston and Maine Railroad was chartered in New Hampshire on June 27, 1835. The firm consolidated several smaller companies, including the Andover and Haverhill Railroad and later the Boston and Portland Railroad. It merged with the Maine, New Hampshire and Massachusetts Railroad in 1842, but retained the Boston and Maine operating name. In the subsequent decades it acquired or leased several other railroads, including the Boston and Lowell (1887), Northern (1884), Connecticut River (1893), Concord and Montreal (1887), and Fitchburg (1900). In 1910 it was acquired by J. P. Morgan and his New York, New Haven and Hartford Railroad. The firm initially prospered on the development of mill towns throughout New England and later capitalized on tourism from urban centers Boston and New York. Nonetheless, the railroad went through a decline during the Great Depression, when most of the old textile mills closed. Part of the Boston and Maine network remains in operation today under the Pan Am Railways (PAS) brand.

This map was engraved and printed by the Rand Avery Supply Company and published by the Boston and Maine Railroad in 1896. There are several different states, as the map was licensed for advertising purposes with some examples appearing as thus, and other exhibiting elaborate advertising surrounds.