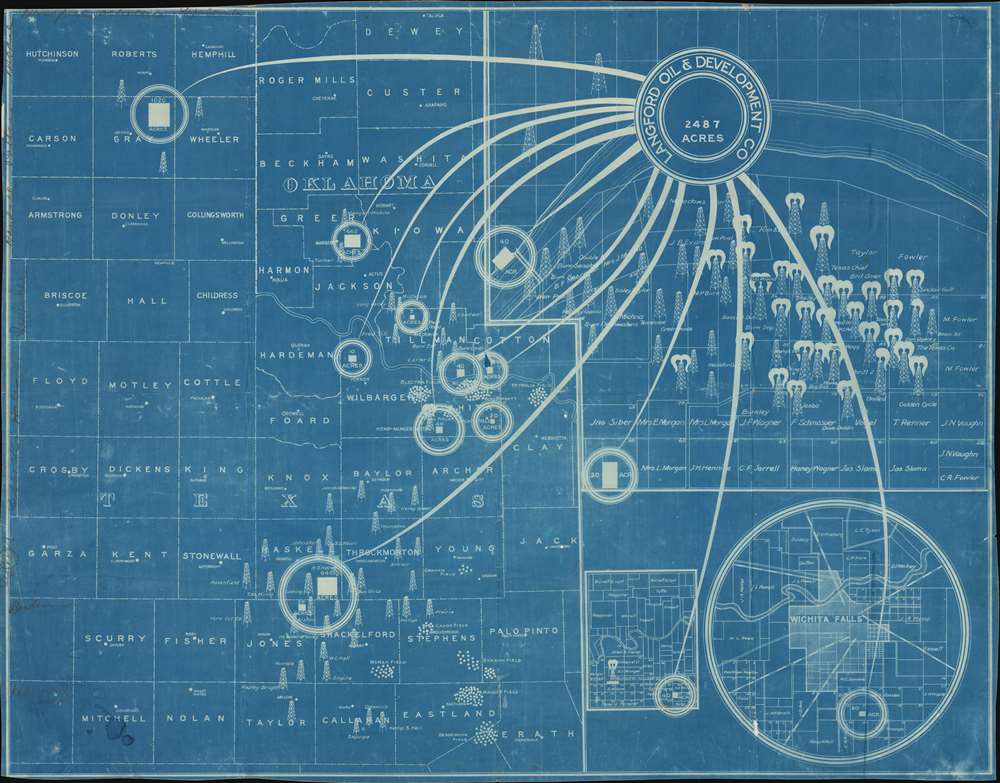 A striking c. 1921 cyanotype persuasive map illustrating oil fields around Wichita Falls, Texas, associated with the Langford Oil Fraud. Comprising four maps in one, the blueprint focuses on the Texas-Oklahoma border area along the Red River, illustrating county boundaries, supposed oil strikes and oil fields, including Kemp-Munger-Allen, Burk Burnett, Electra and Park Fields in Wichita County. Oil Derricks overlay the map to illustrate active drilling as well as successful strikes, such as the Kemp-Munger-Allen well, which is gushing. Wells claimed by Langford are highlighted with white circles connected to the title cartouche by dramatic 'swooshes' reminiscent tentacles. The present map is a cyanotype, a photo-reprographic method used for small run reproductions of less than 15 prints. It bears manuscript annotations on the left side naming additional counties and possibly property holders - suggesting that this was a working map used by the Langford firm.

Hosea Andrew Langford was a Georgia native who, seeking riches, followed the oil boom to Texas and Oklahoma, where contemporary references describe him as an 'oil worker.' Around 1918, he partnered with several others to established the Langford Oil and Development Company in Wichita Falls, a sham organization based out of several Wichita Falls flop houses. The firm's primary address was at the Oil Exchange Building at 721A Ohio Street, considered the 'roughest street in Wichita Falls,' 'where small-time operators could rent offices.' The firm produced propaganda material (like this map) and press releases which were sent east through a series of 'dupe' representatives and intermediaries conned into soliciting investments and selling land to speculating easterners. Despite the impressive printed propaganda, suggesting the potential for unimaginable wealth, a close study of the map, which features some two dozen gushing wells, reveals that none are on land actually owned by the Langford Company! Moreover, a 1921 letter from the Texas Railroad commission revealed that there was no record of the Langford Oil and Development Company ever actually drilling. It is no mistake that Hosea Andrew Langford shares a name with W. S. Langford, a legitimate oil tycoon responsible for much of Wichita Falls’ actual oil boom, and this is likely the reason he was chosen to front the con operation.

Lasting roughly from 1901 to 1940, the Texas Oil Boom, or Gusher Age, was born with the Lucas Gusher at Spindletop. This first major gusher launched a boom period of extensive drilling and economic development throughout Texas. The major petroleum strikes began in Southeast Texas, but soon reserves were found across Texas and wells were constructed in North Texas, East Texas, and the West Texas Permian Basin, with most of the financial benefit going to Houston. Like most natural resource booms, the Texas Oil Boom drew countless fortune seekers, some honest workers and businessmen, others, like Langford, eager to exploit hopes and dream to fleece the unwary.

Printed in cyanotype by the Langford Oil and Development Company sometime between 1919 and 1921. Appears to be the only known example.

Very good. Cyanotype. Some wear and slight loss on original fold intersections.
Looking for a high-resolution scan of this?