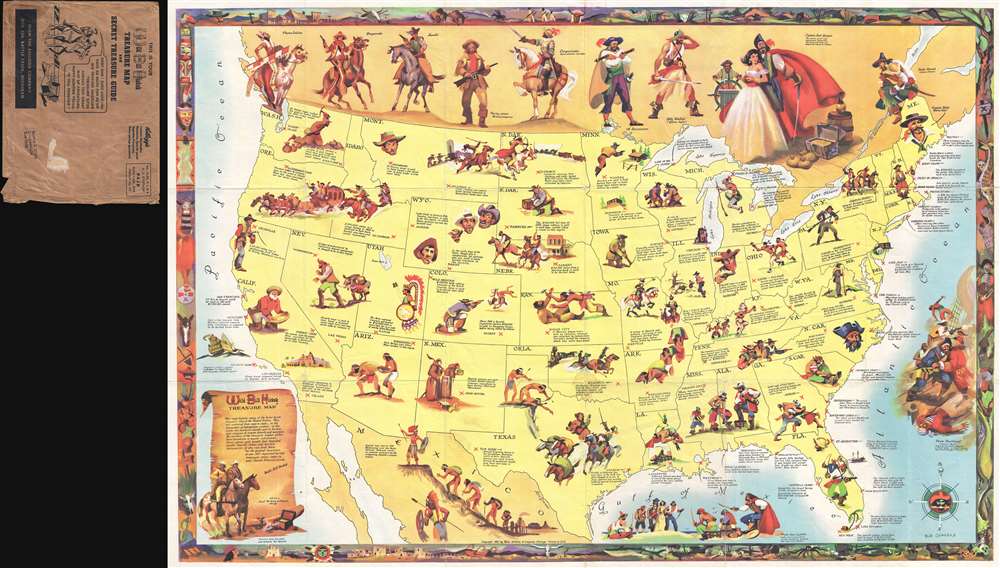 Filled with stories of buried treasure from the American West and shipwrecks from the heyday of Caribbean piracy.

This is a 1952 Robert Glaubke pictorial map of the United States highlighting humanity's fascination with buried treasure. The map depicts the continental United States from the Pacific Ocean to the Atlantic Ocean and from Canada to Mexico. Small red 'X's mark sites throughout the country where buried treasure is thought to be hidden. Wealth amassed by Spanish priests, Caribbean pirates, frontier miners, and Old West bandits is said to be hidden away in areas ranging from cities including Los Angeles and Richmond to the wilds of the high plains and the deserts of the American Southwest. Each location is accompanied by a sentence or two informing the viewer of whose treasure is said to be buried there and, if it is known, how much wealth (usually gold) is purportedly waiting to be unearthed by some lucky, intrepid individual. Vignettes of several of these events decorate the map, a large number of which are violent clashes between Indians and the original bearer of the buried treasure. Large portraits of a plains Indian, a desperado, a bandit, and a conquistador, among others, line the top of the map in Canada. The whole is surrounded by a decorative border filled with the iconography of the Old West and the heyday of Caribbean piracy.

This map was drawn by Robert Glaubke and the information about the buried treasure was compiled and edited by Thomas Penfield. The map was published by Rand McNally in 1952.


Thomas Penfield (fl. c. 1955 - 1990) was an American author and treasure hunter. He wrote several books revolving around lost and hidden American treasure troves, including Lost Treasure Trails, Dig Here!, Western Sheriffs and Marshals, and Around the World with the Fighting Yanks. He graduated from the University of Nebraska.


Rand, McNally and Co. (fl. 1856 - present) is an American publisher of maps, atlases and globes. The company was founded in 1856 when William H. Rand, a native of Quincy, Massachusetts, opened a print shop in Chicago. Rand hired the recent Irish immigrant Andrew McNally to assist in the shop giving him a wage of 9 USD per week. The duo landed several important contracts, including the Tribune's (later renamed the Chicago Tribune) printing operation. In 1872, Rand McNally produced its first map, a railroad guide, using a new cost effective printing technique known as wax process engraving. As Chicago developed as a railway hub, the Rand firm, now incorporated as Rand McNally, began producing a wide array of railroad maps and guides. Over time, the firm expanded into atlases, globes, educational material, and general literature. By embracing the wax engraving process, Rand McNally was able to dominate the map and atlas market, pushing more traditional American lithographic publishers like Colton, Johnson, and Mitchell out of business. Eventually Rand McNally opened an annex office in New York City headed by Caleb S. Hammond, whose name is today synonymous with maps and atlases, and who later started his own map company, C. S. Hammond & Co. Both firms remain in business.