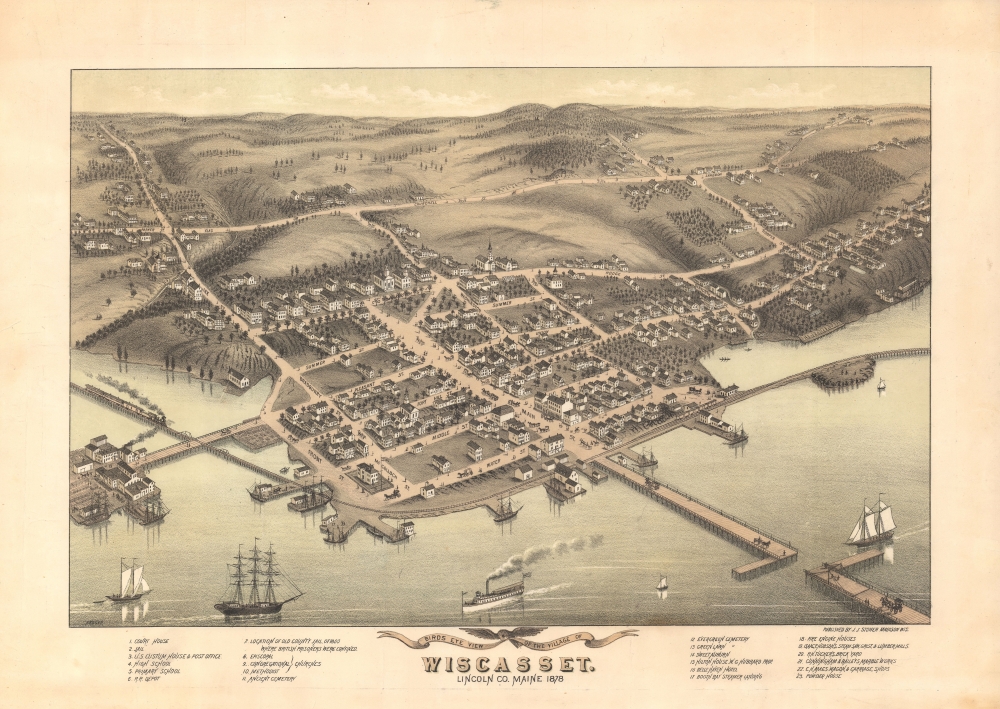 The view looks northwest on Wiscasset from an imagined high point above Wiscasset Bay - a natural widening of the Sheepscot River. The railroad line and Wiscasset Railroad Bridge (from 1871 accommodating the Knox and Lincoln Railroad) appears in the foreground. The wide Main Street and subsequent bridge across the Sheepscot River dominate the town - now part of historic Highway 1. At left we can see White's Island, now abandoned but then connected to the town by a large bridge and home to several lumber processing plants run by the Hobson family. Behind the town, rolling hills trail off into the distance.

According to the sign at the town entrance, Wiscasset is the 'prettiest village in Maine'. A small town on a natural widening of the Sheepscot River, Wiscasset was first settled by Europeans in 1660. It was then abandoned in the late 17th century before being resettled in 1730 and incorporated in 1760 as Pownalborough (after Governor Thomas Pownall). During the American Revolutionary War (1775 - 1783) it became a seaport and center of shipbuilding, fishing, and lumber milling. The town's prosperity led to the construction of multiple large and impressive homes, most of which still stand. In 1802, the town changed its name to 'Wiscasset' the original Abenaki name. Today, it is a popular stop for travelers on U.S. Route 1, known for its historical architecture, art galleries, and delicious fresh lobster rolls.

City views were being produced in the United States as early as the 1830s, but the genre exploded after the American Civil War (1861 - 1865). Bridging the gap between maps and pictures, most 19th century American bird's-eye views presented cities to the public from high vantage points. Some were imagined, but others were drawn from hot-air balloons or nearby hills. The presentation, combining high elevation, commercial interest, and new printing technology, created a uniquely American art form, as described by historian Donald Karshan

This view was drawn by Albert Ruger and published by J. J. Stoner in 1878. Reps notes a single example, at the Lincoln County Cultural and Historical Association in Wiscasset. We note additional examples at the Library of Congress and the Osher Map Library. No known market history.

Albert Ruger (August 29, 1828 - November 12, 1899) was an important Prussian-American viewmaker active in the mid to late 19th century. Ruger was born in Prussia and immigrated to America as a young man sometime before 1850. He lived for a time in Akron, Ohio, where he was an apprenticed stone mason. By 1860, he had his own journeyman and apprentice. Near the end of the American Civil War, Ruger enlisted with the 196 Ohio Infantry. His first views date to this period and illustrate Union camps and an 1865 view of Columbus, where he was stationed. Discovering a talent for viewmaking, Ruger abandoned his work as a stonemason to move to Battle Creek, Michigan, and pursue a new career. Like most view makers, Ruger's views were sold by subscription and most were self-published. Ruger worked with a variety of other view makers and publishers, among them Eli S. Glover, Thaddeus M. Fowler, Joseph J. Stoner (Ruger and Stoner), and Augustus Koch. Ruger's work is distinctive, presenting cities from an exceptionally altitudinous perspective, giving his views a notably maplike quality Moreover, Ruger is significant in the corpus of view making. He is considered the first American viewmaker to achieve commercial success. Moreover, he is noteworthy not only for the quantity of his views, about 175, but also for the subject matter, focusing on southern and western cities following the Civil War. Ruger died in Akron, Ohio, at 71. Learn More...


Joseph John Stoner (December 21, 1829 - May 1917) was a Madison, Wisconsin based publisher of bird's-eye city views active in the late 19th and early 20th centuries. Stoner was born in Highspire, Pennsylvania and apprenticed as a carver of ornamental chairs before turning to publishing. He partnered with the bookseller Ephraim T. Kellogg of Madison, Wisconsin, for whom he was a traveling agent. His career in views began around 1867 when he met and befriended the bird's-eye view artist Albert Ruger, who was sketching Madison that year. Ruger and Stoner partnered and began publishing city views under the imprint 'Ruger & Stoner.' The partners traveled extensively through the Midwest publishing some 11 city views under their joint imprint - although there may be as many as 62 others unattributed. The partnership partially dissolved in 1872 although they continued to work together on a contractual basis. Stoner subsequently traveled even more extensively, hiring young artists to sketch city views in such wide ranging destinations as Texas, Maine, and Oregon, among others. He produced a total of some 314 views with various artists including: Albert Ruger, Herman Brosius, Thaddeus M. Fowler, Augustus Koch, Albert F. Poole, Henry Wellge, Joseph Warner, and Camille N. Drie (Dry). Stoner died in Berkeley, California in 1917. Learn More...