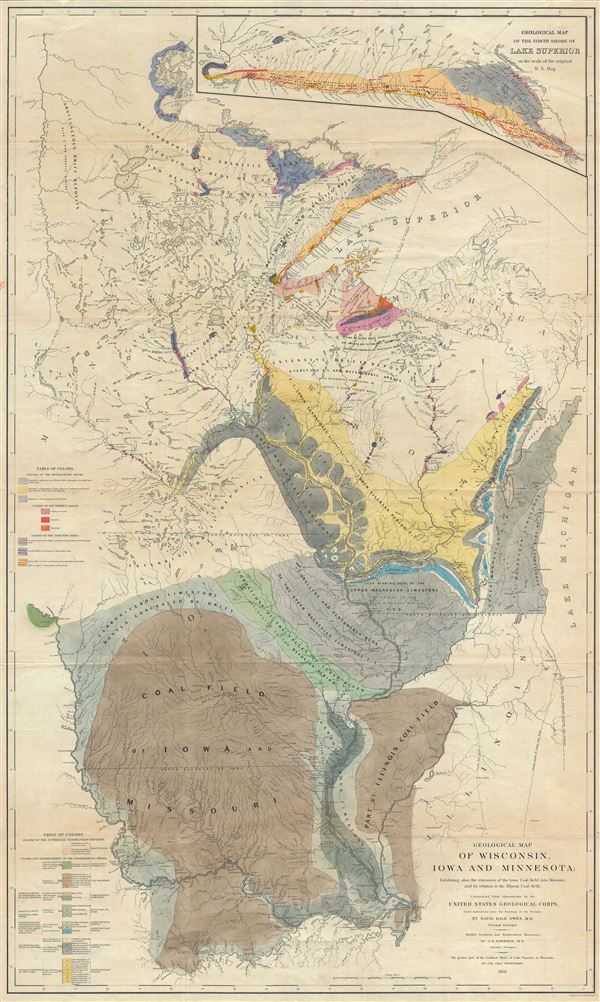 This is a beautiful large geological map of Wisconsin, Iowa and Minnesota by the United States Geological Corps. It covers from the Missouri River east as far as Lake Michigan and from Osage River north to the Lake of the Woods. The map exhibits the extension of the Iowa coal-field into Missouri, and its relation to the Illinois coal-field. Part of Lake Superior is included. An inset map in the top right quadrant features the geological map of the north shore of Lake Superior

The map shows the distribution of the different types of rocks and geological formations along the river and its vicinity. A table of colors is included in the lower left quadrant of the map indicating the superficial sedimentary deposits and the fossiliferous strata from the Drift Period to the Lower Silarium Period.

This map was constructed for observations by the United States Geological Corps, under instructions from the Secretary of the Treasury by David Dale Owen, M.D., principal geologist. Assistant geologist J.G. Norwood, M.D supervised middle, northern and northeastern Minnesota while Col. Chas. Whittlesey supervising the greater part of the southern shore of Lake Superior in Wisconsin.

David Dale Owen (1807 – 1860) was a prominent American geologist, who conducted the first geological surveys of Indiana, Kentucky, and Arkansas. The third son of Robert Owen, a Welsh reformer who moved to the United States and established a social experiment at New Harmony, Indiana, likely that David Dale became interested in geology because of his father's partnership with geologist William Maclure. His first geological work was as an assistant mapping the geology of Tennessee, in 1836. In 1837, he was appointed the first Geologist for the State of Indiana, and later worked as the State Geologist of Kentucky in 1854-1857; he was appointed State Geologist of Arkansas in 1857, continuing as the Kentucky geologist without pay. He returned to Indiana as State Geologist in 1859-1860. While in Arkansas, David Dale Owen drew the first known picture of a natural rock formation in Natural Steps, Arkansas. Learn More...