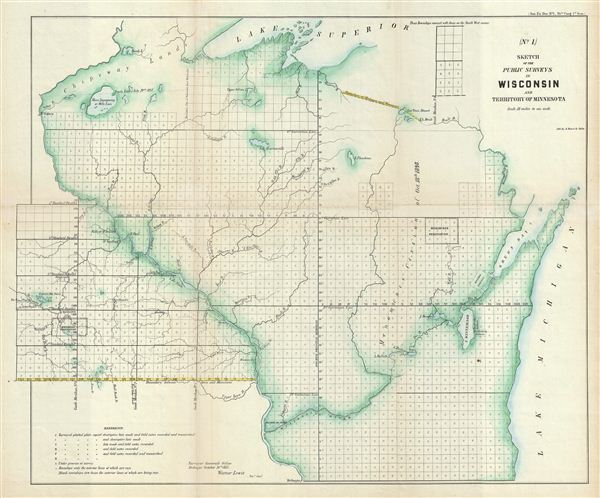 This is an attractive example of the 1855 public survey map of Wisconsin and parts of the Minnesota Territory prepared by Warner Lewis, Surveyor General in the Surveyor Office in Dubuque. The map covers the entire state of Wisconsin and the parts of the Territory of Minnesota from the Big Cotton Wood River to Lake Michigan. The state of the Land Survey is also noted via a series of blocks representing the survey grid. A table in the lower left quadrant explains the various markings on the blocks. Various towns, military posts, rivers, lakes, Indian reservations and various other topographical details are marked. The Winnebago Reservation, the Menominee Cession of Oct. 18th 1848 and the Treaty Line of July 29 1837 are noted. Prepared for issue in the 1856 congressional report, Maps and Views to Accompany Message and Documents 1855-56.