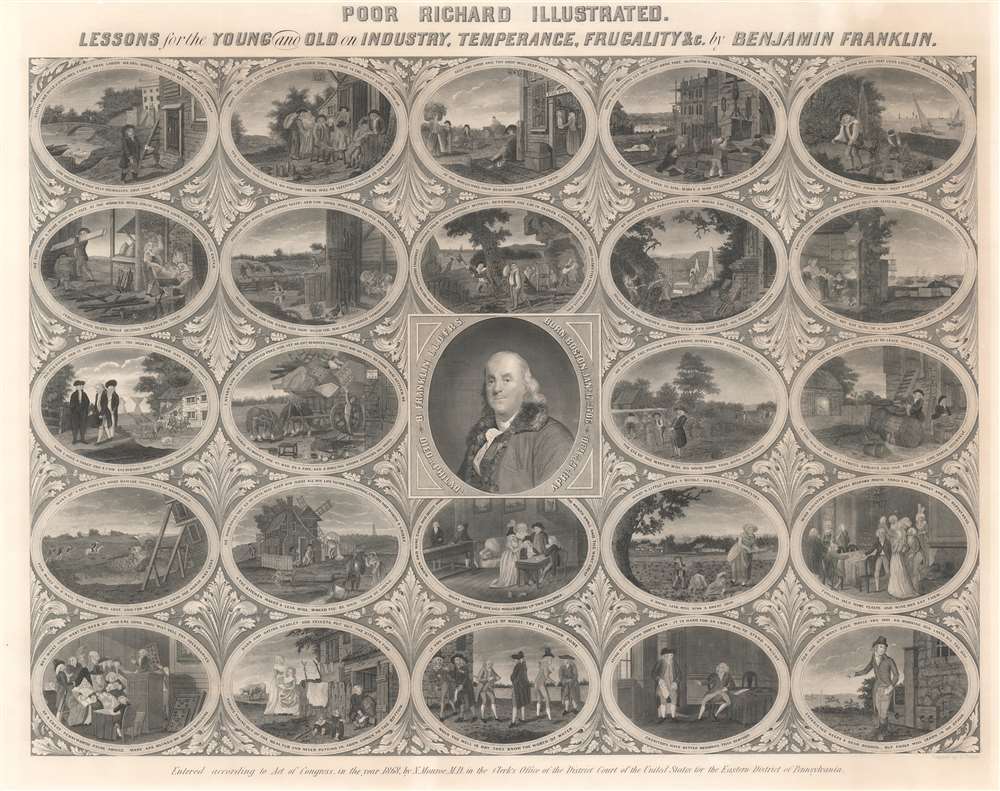 A rare 1868 broadside illustrating the wit and wisdom of Benjamin Franklin (1706 - 1790). The image features 24 medallions, each with quotes from Franklin's writings in Poor Richard's Almanac covering topics ranging from work ethics, to financial management, to temperance. Each medallion features an illustration taken from Poor Richard's Almanac. Most were originally drawn by Robert Dighton and some of the original watercolors survive. There is a portrait of Franklin himself at center, along with birth and death dates. Pelton's mastery as a bank note engraver is much in evidence in the exceptional line and stipple work.

We note several variants on this piece. The earliest was issued c. 1795 in London by Bowles and Carver as Bowles's Moral Pictures, or Poor Richard Illustrated. It was re-engraved by Alvin Oliver Pelton and issued in the United States as early as 1859 by Samuel L. Allen and Thomas R. Holland. The present broadside was published from the original Pelton plate by N. Monroe in 1868. The broadside was again reissued by Thomas O. H. Perry Burnham (1814 - 1891) in 1887. Of the American editions, we note examples at Yale (Clapp) and the Library of Congress (Burnham). All examples are scarce to the market. We note no cataloged examples of the present Monroe edition.

Alvin Oliver Pelton (August 31, 1798 - August 15, 1882), who went by Oliver, was an American line and stipple engraver active in Hartford and Boston in the mid-19th century. Pelton was born in Portland, Connecticut and apprenticed as an engraver under Abner Reed (1771 - 1866) from 1816. Another Reed apprentice was Samuel Stiles (1796 - 1861). Stiles and Reed pandered as 'Reed and Stiles' as early as 1819 (formally 1821). When Stiles moved on to found the American Banknote Company, Pelton remained with Reed in Hartford, establishing the 'Reed, Stiles, Pelton and Co.' imprint. Despite being a fine engraver, Pelton was apparently poor with money and quickly ran the firm into bankruptcy. Pelton moved to Boston in 1827 to engraver for Samuel G. Goodrich. In 1836, Pelton partnered with William D. Terry - 'Terry, Pelton, and Co', bank note engravers. This firm eventually merged with other firms into the New England Bank Note Company of Boston. He returned to Hartford in 1960, setting up on his own account to complete moralistic broadsides, biblical prints, and portraits. His son, Edward Richmond Pelton (January 25, 1840 - February 5, 1899) was also an engraver and publisher. Learn More...